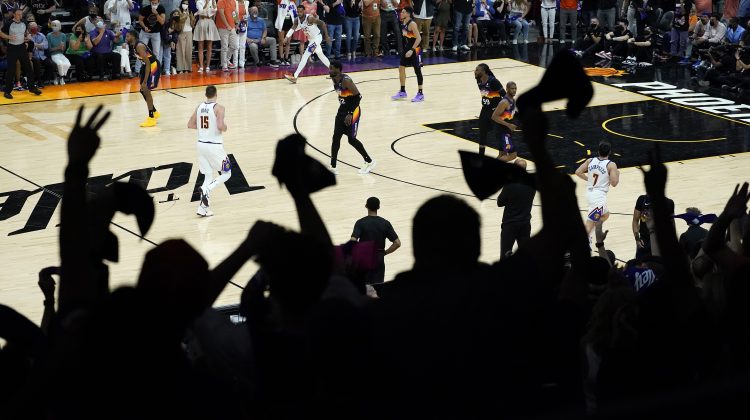 The Phoenix Suns are nine wins away from the Western Conference Finals following a 116-102 victory on Friday. They made the WCF back in 2010 as well, after sweeping the San Antonio Spurs in the second round. That was the last time they made the postseason, after getting bounced by the Lakers in the WCF.

Monty Williams is in awe of the way his team is playing, saying he’s never seen anything like this. He also knows the Nuggets won’t quit, despite being outscored by 56 points this series.

As the brooms are lurking in the hall way, Suns fans are eagerly awaiting tonight’s contest at 5 p.m. PST on TNT. Game 4 is in Denver at Ball Arena, but the UFC was in Phoenix this weekend. Even Dana White is rooting to Rally The Valley.

As temperatures rise, some say the Nuggets don’t want to come back to Phoenix. Not that that’s true, but it’s getting nearly as hot as the Suns’ offense.

Also worth noting, there are plenty of Suns fans in Denver as seen in Game 3.

Suns fans cheer Chris Paul and Devin Booker as they wrap up interviews. A big “Let’s Go Suns” chant just before this pic.twitter.com/eJ074Ryf8c

Our fans showed up and showed out in Denver! 💜🧡 pic.twitter.com/ofDNWFfY6j

Today they’re planning a tailgate outside Ball Arena for those who made the trip to the mile high city.

ATTENTION ALL SUNS FANS IN DENVER

OUR THEME TODAY IS PEACE LOVE AND POSITIVITY #HUGTHENUGS

Last question remains… Will the Suns complete a four-piece order of Nuggets?

Just rolled up to McDonald's drive thru and ordered a 4-piece Denver Nuggets.