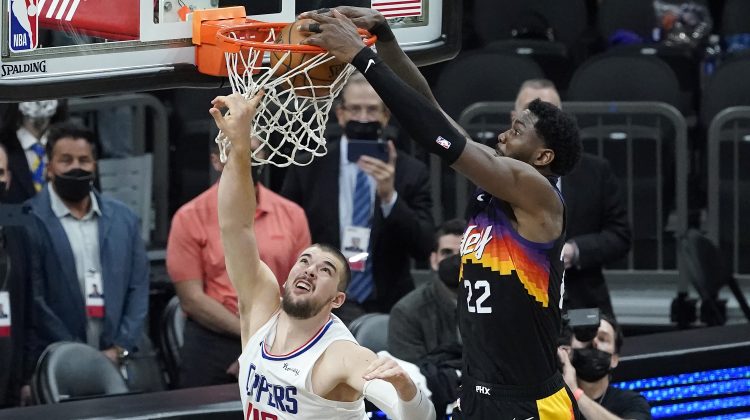 Usually at this point in June Suns fans are eagerly awaiting the results from the madness that is the NBA Draft Lottery.

Instead, they’re witnessing a 2-0 series lead in the Western Conference Finals. The 2018 No. 1 overall pick Deandre Ayton is playing out of his mind. Does it get any better than a lob on an inbounds play to seal a victory? Ayton says no because that’s the best play of his life.

JAE CROWDER INBOUNDS IT TO DEANDRE AYTON FOR THE DUNK TO PUT THE @SUNS UP 2-0!#ThatsGame #NBAPlayoffs#WeAreTheValley pic.twitter.com/ltuQI6lxNl

The Suns couldn’t be happier with the upgrade from lottery to postseason. In Game 2, the Suns beat the Los Angeles Clippers 104-103. Time to travel to LA.

“Credit to Jae [Crowder], we were trying to get a lob for DA,” Monty Williams said. “We’re just grateful for the will of our guys to execute that play… we made enough plays to win that game.”

The fans were electric throughout the game. Williams knows how amazing it is to feel that boost and support on the court.

“I’m just grateful for the fan base,” Williams said. “This might the loudest place I’ve been at in my career.”

Near the end of the third quarter, fans had flashbacks to Steve Nash playing the Spurs with a bloody nose after Devin Booker was headbutted by Patrick Beverley.

Who wore it best? pic.twitter.com/oSYREFC0OJ

Booker didn’t explode for another 40 point triple-double, but he played patiently and within the flow of the offense. Garnering “MVP” chants before and after the headbutt, he finished with 20 points on 5-16 shooting.

“I heard the crowd going crazy so it had to be him or Chris running through,” Williams said about the fan reaction to Booker running out before the fourth quarter.

The Clippers were pestering Book all game long. He looked frustrated at times but he is impacting the game in many facets.

“It’s just playoff basketball,” Williams said. “Book did a decent job of not letting them take him out of his game. He got in foul trouble but still found a way to stay in a few minutes longer.”

Booker says he’ll be getting a mask ready for the next game.

Confirmed by Book: He'll be getting a mask ready for game 3 https://t.co/Ja3YvmFciv

Payne is the story

No team wanted Cameron Payne before the season began. No one except for Monty Williams, who knew his competitive fire would fit with his team’s culture.

“There’s not a lot of room for drop off,” Williams said “Cam was excellent tonight, his ability to get in the lane was huge for us.”

With Chris Paul out again, Payne took over. He led all scorers with 29 points. His acrobatic finishes in the lane and wild step back threes kept the fans engaged from start to finish.

“I’m just holding it down till C gets back,” Payne said ‘The biggest thing for me is no turnovers since I’m the point guard. I’m just playing my game.”

Payne has been a shadow to Paul, on the court and in practice. Ayton says he was bound to have a breakout game like this.

“Usually CP is the first one to practice, but Cam is right there with him,” Ayton said. “He’s working so hard and he’s really under CP’s wing.”

Ayton: From lottery to growth

The lob to win the game will forever be remembered by Suns fans. However, Ayton is playing out of his mind beyond just catching alley-oop passes. He finished with 24 points on 12-15 shooting with 14 rebounds.

“He’s been putting in the work,” Booker said. “He’s been so dominate and that’s going to continue moving forward.”

Tonight was the NBA Lottery. The Suns won in 2018 and drafted the former Arizona Wildcat. After years of grinding, Ayton knows he’s reached a new peak and the Suns are avoiding the lottery for the foreseeable future.

“To see the results now, I don’t want to get out the gym,” Ayton said “That’s what he [Monty Williams] instilled in me.”

Ayton says Booker and Paul have shown him how to work harder and smarter, which he believes will help him play at an elite level for a long time.

“At the end of the day I trust my work, I trust my game, and I work really hard at it,” Ayton said.

Games three and four are Thursday and Saturday at the Staples Center. Fans in Phoenix are chanting “Suns in 4.” Now they’re only two wins in LA away from completing back-to-back sweeps.

“It’s going to get harder,” Ayton said. “These dudes are physical. All we can do is play our brand of basketball.”