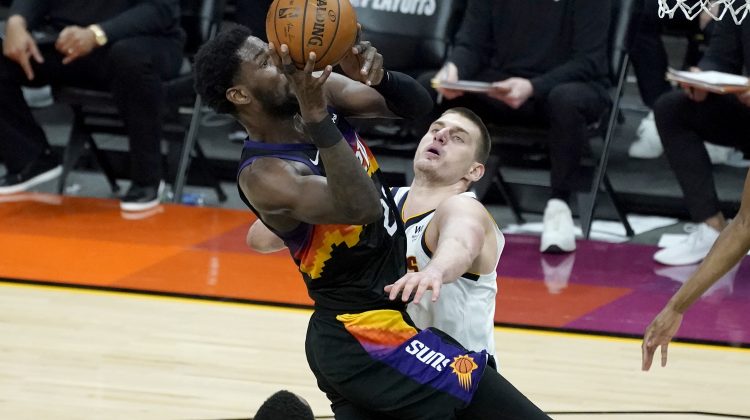 One thing was evident from the opening tip Monday night at Talking Stick Resort Arena.

In this Western Conference second-round series, lace ’em up tight and get ready to run.

The frenetic pace started with the visiting Denver Nuggets blistering the nets at a 70 percent clip midway through the first quarter but ended with Phoenix Suns pulling away in the third quarter and coasting to a 122-105 before a raucous sellout crowd of 16,219 inside TSRA.

After falling behind early, Phoenix seemed to find their footing and flow midway through the first quarter, especially defensively.

“To start the game I thought we were a step slow with our communication,” head coach Monty Williams said. “They just played in the paint. I think they had 30 points in the paint. That’s what I was most concerned with.”

The game was tied at 28 after the first 12 minutes and Denver held a slim one-point advantage going into the locker room at the half.

As expected, the stars showed out early for both teams. Likely MVP Nikola Jokic was efficient and, at times, unstoppable making seven of his 11 first half attempts pouring in a game-high 15. Michael Porter, Jr. had 12 and Facundo Campazzo chipped in 11.

After a quick burst by Denver to begin the third quarter, Phoenix started riding the hot hand of Bridges – who finished with 23 points, five rebounds and five assists – and then Paul started taking over, slicing Nuggets’ defense with an array of drives and pull ups which seemed to break the visitors will.

“Chris has been in those moments so many times,” Williams noted. “I thought he did a good job of spacing and he just made some big shots. That’s who he is.”

We love to see it. pic.twitter.com/pCgPWws9r6

Paul’s backcourt partner-in-crime Booker was effective as both a scorer (21 points on 8-12 shooting) and playmaker (eight assists) in 36 minutes. Ayton finished with 20 points, 10 rebounds and a steal in 36 minutes.

“It’s team basketball, that’s what the playoffs [are],” Booker said in his post-game press conference. “The playmaking ability of everybody.”

Another big advantage for Phoenix Monday night was at the free-throw line. The Suns made 17-20 attempts (85%), compared to Denver’s 5-6.

Jokic paced the Nuggets with 22 points and nine rebounds but his production waned as Phoenix took control of the game in the third quarter and never looked back, outscoring Denver 65-47 in the second half, which included a 42-14 run.