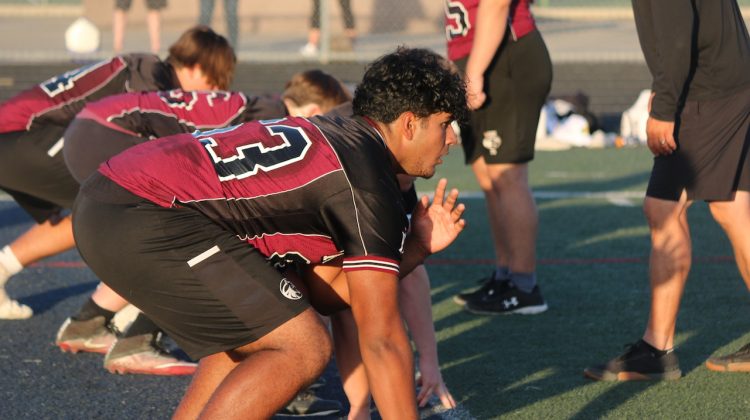 Mountain Ridge 2023 offensive lineman Alex Doost has had a productive offseason. After playing his first year of varsity football in 2020, he had a good showing at the Under Armour showcase in March and has seen three Power 5 offers come his way.

The biggest jump for Doost hasn’t been physically, but mentally. Mountain Ridge had a young and talented team in 2020, but the lack of a normal offseason due to COVID-19 meant the team was assembling the plane while flying it. It took a few weeks for these young pieces to gel and find their footing.

This extra time has been incredibly beneficial for the offensive tackle this year.

“I’ve improved with my self confidence,” Doost said. “Because beforehand, like last season, it was my first varsity year. (I was) really anxious and nervous. But now that we’ve had a lot more experience. I feel like I’m used to all of that now.”

Now, things have simplified with Doost.

“(I’m) trying not to overthink and just going for it, because that’s how it was really last season. It was just a lot of overthinking. And now it’s just aggression, and going.”

Doost will anchor an offensive line that already features returning talent like Alexis and Andy Sanchez. He also has a strong relationship with quarterback Brendan Anderson.

“Brendan and I have  a really good relationship because I’ve known him for a really long time. So it’s been a functioning thing for a whilem” Doost said. “I think we know each other, to the point where we can work together really well.”

He recently visited Arizona State once the recruiting dead period was lifted.

Doost said he has been building a relationship graduate assistant Bobby Wade. He has followed the Sun Devil program since he was a kid and both of his brothers attended the university.

“They’ve told me how amazing the campus was,” Doost said. “I didn’t think much of it and then I went and then it was a huge experience.””

The Spartans were the next to offer Doost.

After a call with offensive line coach and run game coordinator Chris Kapilovic, Doost got a good first impression of the Michigan State program.

“I get a feeling that they’re really close with their players,” Doost said. “They’ll do a lot for him. When I look for a lot, like the next level.”

Then, after a camp session at the University of Arizona, the Wildcats offered Doost.

“What I liked about the program is how they treated their players and how much love they have for their in-state Arizona kids,” Doost said. “Coach Fisch and his staff are very positive influences.”

It’s already been a busy offseason for Doost recruiting-wise. It feels like it’s just the beginning, too.