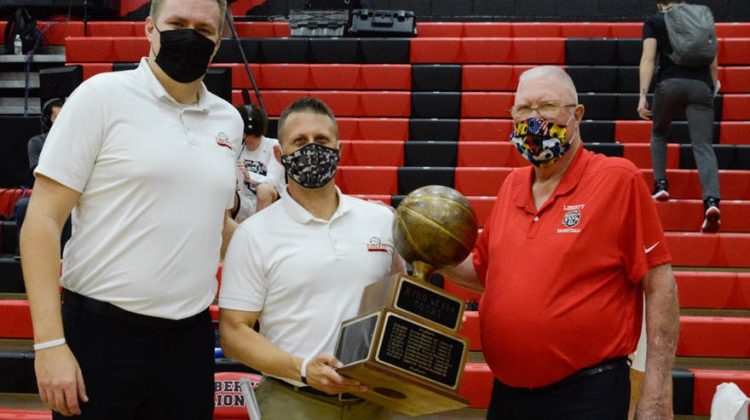 Jerry Conner is nothing if not adaptable. Since the beginning of his six-decade-long career as a high school and collegiate basketball coach, the sport has undergone massive changes, but Conner has managed to win at every step of the way.

He has won state titles, coached NBA players and been inducted into the Arizona High School Coaches Hall of Fame, but Conner has recently opted for a new challenge – working as an assistant at Liberty High School in Peoria.

He joined Liberty’s staff after his time as the head coach at Phoenix Horizon came to an end in Feb. 2020, and he has embraced the opportunity to share his wealth of basketball knowledge with the current group of players.

“It’s been a great experience for me,” Conner said. “There were a lot of things were different [at first] but I think I’ve learned some things that I can apply as far as helping me become a better coach.”

The coaching journey that brought Conner to Liberty began not far away in Casa Grande, where Conner grew up. The success of Casa Grande High School’s football and basketball teams had a profound impact on him during his youth and fostered an appreciation with high school athletics that would lead to his success as a head coach later on.

“Casa Grande at that time was a real powerhouse,” Conner said. “All of us little kids couldn’t wait to be Cougars. If (Casa Grande football) coach (Al) Van Hazel knew your name, you were a celebrity.”

Conner is nothing if not persistent. He began his coaching career in modest fashion, landing his first head coaching job at Buckeye High School not long after graduating from Grand Canyon University, where he played for the baseball and basketball teams.

Conner would change addresses multiple times in the years that followed before accepting an offer to become the first ever basketball coach at Shadow Mountain High School in 1974, a job that would come to define his career.

At the time, Shadow Mountain was a brand-new school, and Conner had the tall task of building the basketball program from scratch. At this time, he was not far removed from his own high school days, and he drew inspiration from the Casa Grande teams he had grown up idolizing.

Their prestige, strong culture and distinct identity were all things that Conner aimed to recreate at Shadow Mountain, and though he would ultimately realize his vision, things proved challenging in the early going.

“That was our goal,” he said. “I think the biggest thing at Shadow was we were always the smallest school in that classification. We had youngsters who worked hard, but we obviously didn’t have a championship to show for it in the early days.”

While it didn’t take much time to promote a team culture that was conducive to winning, the wins themselves took longer to manifest. Fortunately, as the school grew, so too did the number of talented athletes that walked its halls.

One such athlete was a diminutive point guard named Mike Bibby, who would become the centerpiece of Shadow Mountain’s state title-winning teams in the early 1990’s.

During that period, Shadow Mountain became known for their high-paced, ‘run-and-gun’ offense, which finally gave the program the notoriety and the trademark that Conner so desired when he first took over.

“We were fortunate to get a couple of outstanding classes as far as athletes,” Conner said. “The best one in my opinion was Mike Bibby…but we had other youngsters who were top notch around that time.

Once his 32-year run at Shadow Mountain finally came to an end in 2006, he left no stone unturned when searching for his next coaching position. The search took him all the way to his birthplace of Mississippi, where he once again took on the challenge of starting up a brand-new program, this time at Blue Mountain College in the northern part of the state.

“I hadn’t really thought about moving up to college,” he said. “[Blue Mountain] had been an all-girls’ school for a hundred years and it was going to be a really drastic change for them. I thought it would be a fun thing to be a part of.”

Conner’s stint at Blue Mountain College mirrored his early days as coach at Shadow Mountain. The team’s effort was commendable, but wins were very hard to come by. Although the Toppers won just two conference games during his coaching tenure, Conner stuck around for four seasons.

In the end, the homesickness caught up with him and he returned to Arizona, where he made stops at Sandra Day O’Connor High School, Arizona Christian University and Horizon High School before taking on his current role at Liberty.

We welcome the legendary hall of fame coach, Jerry Conner, to our staff. Coach Conner served for 32 years as Shadow Mtn’s HC, won 3 state titles, & is known for his fast break style of play. He will serve as our program’s offensive coordinator. Get ready Run, Stun, & Have Fun! pic.twitter.com/cYb3SQYiWd

“I wouldn’t say ‘never’ [to any coaching job],” Connor said. “I was looking for a position and I was fortunate enough that around the time I left Horizon, I had a call from the coach at Liberty, coach Wood. We talked for a pretty good while and he offered me the opportunity to join him. I thought, ‘you know what, this would be a good learning experience for me,’ and it has been.”

It would be understandable for a coach in his position to retire or take a backseat and serve as an assistant for the rest of their career, but his love for the game has kept him hungry for more success. While Conner enjoys his current job, he has not ruled out the possibility of taking another head coaching job under the right set of circumstances.

“I’m available,” he said. “Let’s put it that way. I really like where I am, but by the same token, there’s a part of me that would still like to be the head guy.”

Whether or not Conner secures another head coaching job, his legacy and his place in Arizona high school basketball have already been firmly cemented. His influence remains deeply entrenched in Shadow Mountain’s basketball program, as well as the building that hosts its games, which bears Conner’s name.

With 642 career wins and multiple state titles, he has reached the greatest heights a coach can hope to reach, but as long as there are coaching positions to be filled, Conner will make sure his name is in the conversation.