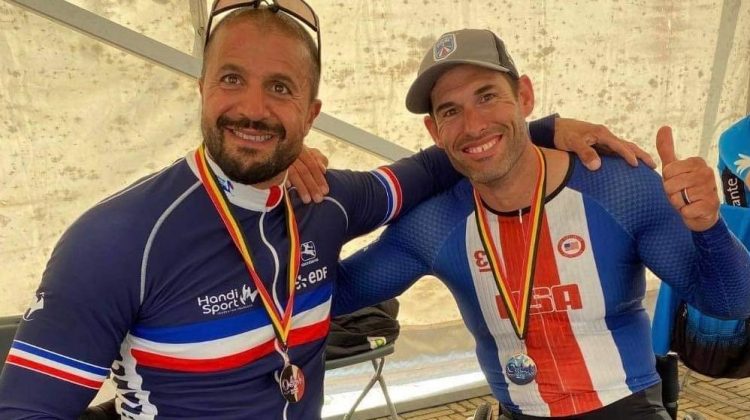 Ryan Pinney’s path to the 2021 Paralympic Games has been fueled by the never-ending
support of his family and friends.

Before suffering a spinal cord injury in 2012, Pinney was a 14-year Air Force veteran
who enjoyed biking and being out in the beautiful Arizona sun. Shortly after his accident, he received his first hand-cycle as a gift from the Free Will Foundation and decided he would give it a try.

“I had never heard of hand-cycling until then. I got on it for the first time and to be
honest with you, it was hard. I was on it for just five minutes, and it was painful,” Pinney
said.

While Pinney found hand-cycling difficult at first, he refused to give up his new hobby and made it a point to push himself a little
bit harder each day. Eventually, he became confident enough to participate in the Free Will
Foundation’s annual 430 mile bike ride from Phoenix to San Diego, which raised money
for wounded soldiers and veterans.

“What I found in hand-cycling early on was that it was freeing to me. It got me out of my
chair and away from the house. It helped me see the Phoenix I grew up in and love
again,” he explained.

Competitive by nature, Pinney thirsted for more and began to look into
competitions and races involving hand-cycling. Through the Air Force Wounded
Warriors Program, he was able to travel around the world and gain experience as a
hand-cyclist. This newfound love became his passion and he turned it into his new
mission to find success in this field and make it his job.

Cycling is far more popular in Europe than in the United States, and Pinney was shocked by the difference in competition level when he first started out. Once again, he made an effort
to improve and soak up knowledge from his competitors, which helped him develop
lasting friendships.

“You have to invest all your time and energy into not just training, but also knowledge,”
he said. “I’ve developed so many friendships from this that are half a world away.”

Despite only seeing these friends and competitors three to four times a year, he’s able
to connect with them at any time by video call or text message. Pinney’s relationship with his fellow racers has developed into a friendly rivalry where they show love to
each other no matter what.

“We do have a common bond. We all have a spinal cord injury, but we don’t talk about
it. It’s an unspoken bond,” said Pinney.

Pinney was named to Team USA in 2020, but was not officially selected as a hand-
cyclist before the COVID-19 pandemic hit. In February, he would have joined Team
USA in Colorado Springs for six months of training leading up to the games.

“If I went to the Tokyo Olympics in 2020, I think I would have been fighting for a top 10
spot. Which is good, but that’s not my goal. I want to podium, I want to go for gold,” he
explained.

For Pinney, the pandemic came with its share of pros and cons. The unique circumstances enabled him to do a lot of physical and mental training to prepare for Tokyo, which in turn made him feel reinvigorated.

“In spite of the awful pandemic, it was a blessing in disguise for me. I have a daughter,
she’s two now, and I would’ve been away from her and my wife for six months,” he said.
“But being here allowed me to stay close and build a relationship with her that I would
have sorely missed. I was able to train at home and not worry about my family.”

Being a father, husband and family man has given another purpose to Pinney’s life. He
understands that his journey to the Paralympic games was not just himself getting there,
but also his family.

“Having a daughter changed my heart and what I enjoyed doing. Being a dad is my
passion outside of sports,” he said. “I had to step back and ask, ‘Am I doing this for
her?’, and I realized that I wasn’t. This isn’t her dream, it’s mine. But, I’m here to show
her and be an example that if you do have a dream, that there’s no other options. You’ve gotta go after it as much as possible.”

During the past year, Pinney also had the chance to decorate and personalize the
bike he’ll be taking to Tokyo. It features the Phoenix logo, Arizona Flag, United States
flag, his daughter’s initials, and his late father’s nickname.

“The bike is my teammate out there. If I can take care of the bike, the bike’s gonna take
care of me. I’m gonna be able to trust that it’s gonna hold together and when I need to
put the power down it’ll respond the way I need,” he said.

2020 was a huge stress reliever for Pinney, and the much-needed family bonding
helped change his mindset. He’s much more relaxed and confident in himself. He no
longer feels the need to be perfect, and his second-place finish at the Hand-
Cycling World Championship in Belgium gave him the justification that he’s ready to
compete with the best of the best around the world.