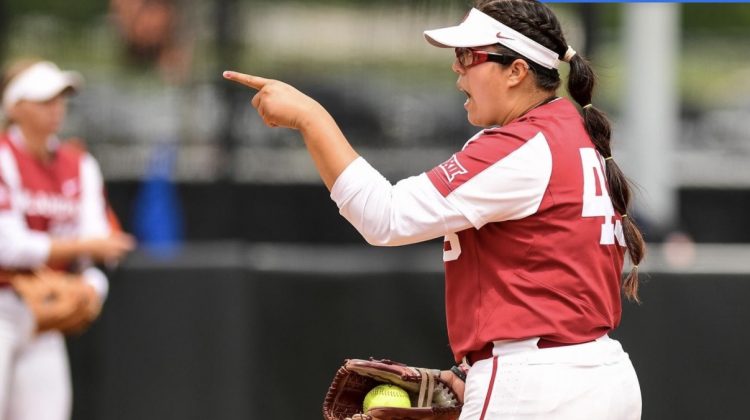 Oklahoma pitcher and former Mountain Ridge star Giselle Juarez is a two-time First-Team All-American and was named Big 12 Pitcher of the Year in 2019.

In her first year in Norman, she went 21-0 as a starter and finished with a 1.39 ERA. Although her team made it to the championship series of the Women’s College World Series, they fell just short to UCLA.

Fast forward to 2021. She has led her team to a National Championship, going 5-0 with a 0.90 ERA and 38 strikeouts. She also won the Most Outstanding Player of the WCWS award.

“I flipped a switch,” Juarez said on her performance during the WCWS. “I just got after it. I stopped worrying about everything, and I just did it for them.”

However, you must go back to 2020 to see how her road to becoming a champion was a difficult one.

Juarez attempted to play for Puerto Rico and tried to get the team into the Olympics. However, she felt a pop in her arm while practicing in international competition.

“I kind of thought it was my bicep,” she said. “But I kept getting told from other doctors, it probably wasn’t…I got told it’s like a one in a million chance that it was my bicep tendon.”

After many different shots and treatments, Juarez continued to pitch. But while playing in a tournament in Tucson in February 2020, she was two batters in before feeling another pop in her arm.

“I called coach [Jennifer] Rocha after a pitch and I was like, oh my gosh, I can’t do this. I felt it,” Juarez said.

An exploratory surgery had to be done to find out what was causing the pain. Doctors found a two-thirds torn bicep tendon, just as Juarez originally suspected. The injury ended her season after throwing just 6.2 innings.

With the season was canceled in March due to the COVID-19 pandemic, it allowed Juarez an ample amount of time to recover before the next year. Although, her recovery didn’t quite go as planned. It was a very difficult experience and one that changed Juarez’s life.

“That recovery was really hard,” Juarez said. “I would take two steps forward, one step back…I just remember being on a phone call with my athletic trainer. I was like, ‘I don’t know if I’m going to be able to push through this.’ I thought my career was ending. I was really close to being done.”

She started throwing live again to teammate and former Sandra Day O’Connor High School infielder Grace Lyons while staying in Arizona in December. As she began to throw more and more, Juarez realized that she had to change her pitching mechanics.

Her change up was a defining pitch during her 2019 season, but the surgery left her unable to hyperextend her arm like she used to.

“It was a little bit harder to throw the changeup just based on my motion,” Juarez said. “I didn’t really throw a changeup during the World Series after an off speed that I had in my back pocket the whole time. But no one really knew about it.”

Once the 2021 season started, it took some adjusting for Juarez to get back to her dominance in the circle. She struggled at times during the regular season, finishing with a 3.25 ERA, the highest among starters on the team.

Head Coach Patty Gasso decided not to pitch her during the NCAA Super Regionals, making her World Series turnaround all that more impressive.

“My heart just was overflowing with joy for her because it was a tough season for her,” Gasso said. “It was her super senior year. She had a lot of things to prove.

“She had that moment in the course of about seven days and caps off her career in the most ultimate way you could ever think of.”

Lyons felt her teammate’s performance was all due to the learning experience from the injury and adversity she overcame throughout the whole process.

“I think there’s a little fire under “G” waiting her turn and just having that comeback season that maybe she was hoping she had a better season, but I think it all ended up perfectly,” Lyons said. “She was able to end it on that…she had worked for it and that surgery she had was something that was just preparing her for this moment.”

After playing in her final collegiate season, that moment of winning a championship paid off after a long journey to get there. From heartbreak in 2019, to a major surgery and canceled season, to Women’s College World Series champ, it was quite the triumph for the Arizona product.

“I’m really grateful,” Juarez said. “It was a very hard process. It was harder than anything, but I feel like it helped me gain that resiliency for going through it and wanting it for my team.”

The Glendale native said she will be returning to Arizona this summer and then will take part in Athletes Unlimited, which is one of the newest professional softball leagues that began play last summer in Rosemont, Illinois.