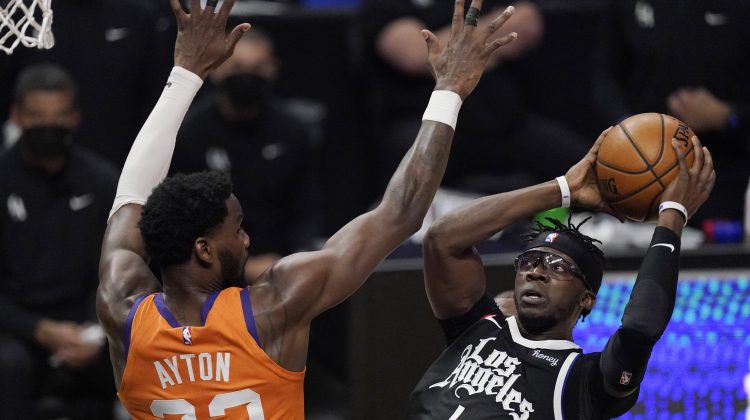 The trifecta was back in business tonight. CP3 wasted no time making his presence known on the hardwood.

The @Suns backcourt finding their big on rim runs early in Game 3 on ESPN! #NBAPlayoffs pic.twitter.com/WfAc6VUBlJ

Clippers and Suns fans alike had their eyes on CP3 but couldn’t look away from the extra equipment Devin Booker was sporting. The protective shield looked a bit like a strange Halloween costume…but whatever works.

Devin Booker and Chris Paul didn’t look like the usual dynamic duo…and the 1st quarter results showed it. The Clippers took an early 29-21 lead heading into the 2nd quarter.

On a mission in transition. pic.twitter.com/OzD8EZQZ48

The Suns rose to the occasion in the 2nd quarter, making a comeback and taking the lead after a slow start.

CP3 (6 assists) pretty pass to Cam Johnson (3-4 FGM) during a 14-4 @Suns run to retake the lead! #NBAPlayoffs on ESPN pic.twitter.com/Bvy0ZdyJji

They weren’t looking like the post-season Phoenix Suns the world has come to know. Regardless, they Rallied the Valley and went into halftime up by 2 points.

Ayton was the real star of the first half with 10 points and 6 rebounds.

Need both to hit more shots in 2nd half. Cam Payne injury is something to keep an eye on, especially w/ Paul still getting his legs back. #RallyTheValley

Paul George in his bag to make this #UnbelievablePlay, setting up Ivica Zubac!

21-3 Clippers run in the 3Q on ESPN pic.twitter.com/q7nEhimBMd

Devin Booker tallied his fourth foul and his first technical foul in the third quarter. Maybe the new gear has some bad juju?

Devin Booker and Patrick Beverley were called for double technicals on this sequence. pic.twitter.com/Rv1VGLMd1A

The Clippers closed out the third quarter in style. Paul George was already heating up but he lit a fire inside Clippers fans with this half-court shot.

With about 7 minutes left in the game the Suns went on a 12-0 run to cut the Clippers lead but couldn’t keep it going long enough. While Phoenix was heating up, Chris Paul went up to #16 on the NBA Playoffs Total Steals leader board.

Congrats to @CP3 of the @Suns for moving up to 16th on the #NBAPlayoffs STEALS list! #ThatsGame pic.twitter.com/ecUWP3RUpM

Just when Phoenix looked like they were making a comeback, they went 3.5 minutes without scoring a single point.

The Clippers probably just didn’t want the “Suns in Four” guy to get that much attention. The sweep is out of the question for the Suns after the Clippers got the dominant W. So is there a “Suns in Five” guy out there somewhere?

The @LAClippers win their first-ever game in the #NBAWCF presented by AT&T! #ThatsGame

The Suns will try to come back from their 106-92 loss on Saturday for Game 4.

Back at it Saturday. pic.twitter.com/YVQw6Lav3s