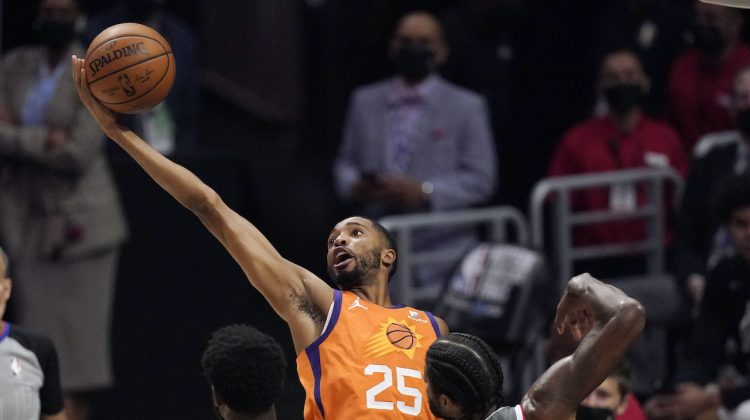 Winning ugly is one thing, the Suns’ Game 4 Western Conference Finals win on Saturday was flat-out homely. Contractors short on supplies should look no further than the batch bricks being thrown around at the Staples Center for both teams.

But as Devin Booker has shown, you’d rather be up 3-1 in a series with a few scars to show for it than be unscathed in an even series. And the Suns did just that, beating the Clippers 84-80 on Saturday night to be a game away from the NBA Finals.

The good news for the Suns? They showed no residual hangover after a rough Game 3 loss. Their key players were involved early an they pulled out to a commanding lead. After an impressive first half where the Suns held a 50-36 lead, the Clippers closed the gap. And then no one scored. For a long time. The scoreboard stood stagnant from 10:07 to the 6:23 mark in the 4th quarter at 71-70.

The game’s biggest stars didn’t hit all that many shots either. Devin Booker shot 8/22 and Paul George was 5/20 from the field and 1/9 from beyond the arc. Both players were able to get to the line consistently to combine for 48 points. But Booker fouled out and did not play the closing moments. George missed a key free throw late in the contest too.

The game was ugly, but the Suns got the job done.

“We competed at the highest level that I’ve seen from us all season long, especially on the defensive end,” Suns head coach Monty Williams said “We just have to have a great deal of balance with our emotions and handle this the right way, not get too far ahead.”

Deandre Ayton was one of the most efficient players on the floor on Saturday, scoring 19 points, nabbing 22 rebounds and blocking four shots. He was a constant presence in the middle, altering shots and creating second chances for a team that could use all the extra chances it could get.

“I thought Deandre’s presence, his effort, the rebounding, shot blocking, his communication on defense, switching out on smaller guys and being able to guard them, He was the catalyst tonight on the defensive end,” Williams said. “I thought it was unreal performance from him, and our guys rallied around him.”
Ayton said his big performance stemmed from his struggles in Game 3.
“If I’m being honest I got outplayed last game,” Ayton said. “(Clippers center Ivica Zubac) did a great job of controlling the glass and being a presence down low on both ends of the floor and, and it was up to me to get in front of them, compete with that or challenge that and, you know, just try my best. That’s about it. I just really try my best to just be relentless on the glass and really try to control both ends of the floor.”
Chris Paul was the calming presence at the end, getting to the line eight times and converting six free throws to seal the 84-80 victory. With Booker fouled out, the veteran point guard was able to create a little space between the Suns and the Clippers in the closing minutes.
“He did it when we were in New Orleans, he’s done it with us this season,” Williams said. “When he was with other teams, he was always the guy to go get the ball so he’s not afraid of those moments. It’s all about winning for Chris. It could have been taking a charge, it just so happened to be a free throw situation. It’s something we work on, something we walk through, but those guys like Chris just want the ball in those situations because they want.”
Now, Phoenix returns home to try to tie up the series and make the team’s first Finals appearance since 1993. The team sits in a comfortable position with a 3-1 lead against an embattled Clippers team, but as their head coach says, you can’t get happy on the farm.
“It’s just laser focus, Paul said. “Three wins don’t win the series. So right now we do what we came here to do, we want to get one of these (games). And now we got to stay focused and be ready to go back to our crowd.”
And while they won’t get too far ahead of themselves, this postseason run has been the main objective since the beginning, and the team is a game away from crossing another goal off the list.
“I mean we know what’s on the table,” Booker said. “We can’t hide that but we’ve kept the same minset the whole playoffs. The regular season, honestly, is building this thing brick by brick, game by game, so we’re not looking too far ahead, saying who we’re going to get in the Finals or anything like that but we definitely understand taht if we win the next one, we’re in the NBA Finals.”
Share Tweet Share