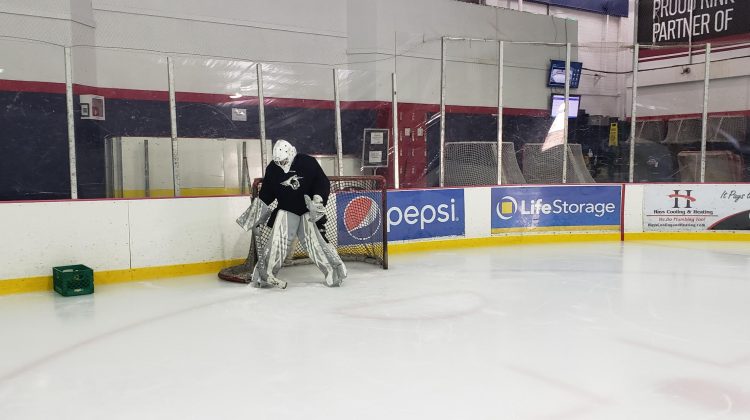 As the ice hockey scene in the Valley continues to grow, more and more promising young players are emerging from local youth hockey programs and moving up to the ranks of high-level junior hockey.

Case and point: 18-year-old goaltender Caleb Wall, a product of the Arizona Bobcats organization. Following an all-star season with the Bobcats in the NAPHL, Wall has taken the next step in his young career and signed with the New Mexico Ice Wolves of the North American Hockey League for the 2021-22 season.

Wall initially joined the Ice Wolves as an injury replacement towards the end of their season, but he ultimately won the team over and earned a permanent spot on New Mexico’s roster thanks to his work ethic and strong performance in practice.

While he did not appear in a game, Wall impressed his coaches enough to serve as the backup to Beni Halasz in a game against the Wichita Falls Warriors on Apr. 10 and would have seen action had Halasz struggled or suffered an injury.

“I went up there just thinking I was going to go for a week or so,” he said. “I ended up staying for two weeks, came home for a couple days and then went for another three weeks. I finally found out [that they tendered me] the last day I was there.”

The New Mexico Ice Wolves are excited to announce that we have signed a tender agreement with Goaltender Caleb Wall for the 2021-22 season! pic.twitter.com/KuiacwPvLh

Now that he has earned the trust of his coaches and become familiar with his new team, Wall finds himself in prime position to become one of the Ice Wolves’ regular goaltenders for next season.

Although he has already built a good rapport with the organization, Wall is taking nothing for granted, and has been working tirelessly with his goalie coach, Jeff Tecca, to get into peak condition ahead of New Mexico’s training camp.

“One thing I’ve tried doing is getting my foot speed faster and moving around the crease way faster,” Wall said. “Kids shoot harder [at the NAHL level] and they’re always make good plays. The game just feels so much faster.”

Wall knows all too well how unforgiving the league can be for young goaltenders, as he surrendered three goals on nine shots in his NAHL debut with the St. Cloud Blizzard last season.

In five games with St. Cloud, Wall posted an 0-4 record and an .817 save percentage, though he can hardly be blamed for struggling given the Blizzard’s 10-37-4 overall record and -110 goal differential that year.

This sort of baptism by fire would be enough to shatter the confidence of most goalies, but not Wall. The experience has inspired him to work even harder than before in order to perfect his game, and he has no doubt that his return to NAHL competition will yield much better results than did his first stint in the league.

Wall’s goaltending coach, Jeff Tecca, has also noticed pronounced improvements in his game since the two began working together.

“Leaps and bounds,” Tecca said. “He’s always had a dedication for the position and game and a want to get better. His speed is so much better, his footwork. It’s been leaps and bounds.”

The process of adjusting to the faster-paced style of play at the next level would be difficult enough on its own but playing for New Mexico will also require the Arizona native to spend an entire season away from home for the first time, which may present an even greater challenge.

Nonetheless, Wall expects to adapt to his new situation rather quickly, and although he will miss his family, the non-stop grind of an NAHL schedule should act as an effective distraction from any potential homesickness.

“It’s going to be tough, but I think I’ll do well,” he said. “The biggest challenge will just be not being at home and living with another family.”

The road to becoming the Ice Wolves’ starter will not be an easy one, but Wall is more than prepared for the journey. The ardors of the NAHL have already tried and failed to fluster him on one occasion, and this time, he has every intention of getting even.

The end result of his revenge tour is yet to be determined, but one thing is certain: this Wall won’t be knocked down easily.