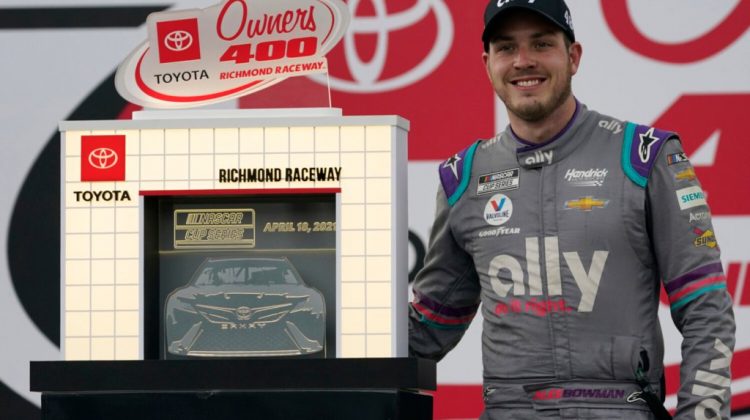 Drifting across the Virginia finish line, Arizona native, Alex Bowman, shouted in celebration over the radio as the 27-year-old claimed his third career victory in the NASCAR Cup Series.

FOX play-by-play announcer, Mike Joy, described it as a “surprise ending,” at Richmond Raceway. Stewart-Hass Racing driver, Kevin Harvick, blew a right rear tire and brought out a caution with only 20 laps remaining. Bowman charged ahead in the ensuing restart for the third position, taking the lead from Joe Gibbs Racing’s, Denny Hamlin, leading the final ten laps of the race en route to the victory.

“To be honest, we were terrible on short runs,” Bowman said postrace on FOX. “Getting to race a guy like Denny at a place like this is really cool.”

Denny Hamlin is a three-time winner at the Richmond three-quarter-mile track and led the most laps on the day. Bowman and the No. 48 team overcame a pit road penalty at lap 240, just shy of the halfway point of the race, leading only the final ten laps to beat Hamlin on the final run of the race. It was the first victory for the legendary 48 since 2017, and the first NASCAR victory for Ally Bank as a sponsor.

Bowman was emotional in his victory lane interview on FOX, dedicating the race to Rowdy Harrell, a Hendrick Motorsports crew member, and his wife, Blakley, who were tragically killed in an automobile accident during the offseason in Florida.

“This one’s for Rowdy and his family.”

This is Bowman’s first victory after moving to the Hendrick Motorsports No. 48, formerly driven by seven-time NASCAR champion, Jimmie Johnson. Bowman was formerly racing the No. 88 for Team Hendrick directly following the retirement of Dale Earnhardt Jr.

Bowman grew up in Tucson racing dirt midgets at local tracks, becoming a USAC National Focus Midget Champion in 2008 and the USAC National Midget Rookie of the Year in 2009. After a life-threatening crash in Las Vegas in 2010, Bowman stepped away from dirt racing and move to North Carolina to pursue a career in stock car racing.

The win locks Bowman into the NASCAR Playoffs, an elimination bracket-style postseason that takes place in the final ten races of the season. If he can advance the championship, he’ll battle for his first career championship at his home track of Phoenix Raceway.

NASCAR’s next stop is at Talladega Superspeedway in Alabama on Sunday, April 25. Next time NASCAR is in Phoenix, they’ll be crowning four champions during Championship Weekend at Phoenix Raceway, with the Cup Series championship race on November 7.

We just did that! Never count us out.

Jordan Spurgeon ·
@spurge_
Chris Paul’s kids have the day off from school so they joined him at media day. Monty was hyped when he saw them. @Sports360AZ https://t.co/5PEHOhXabX
View on Twitter
3
9