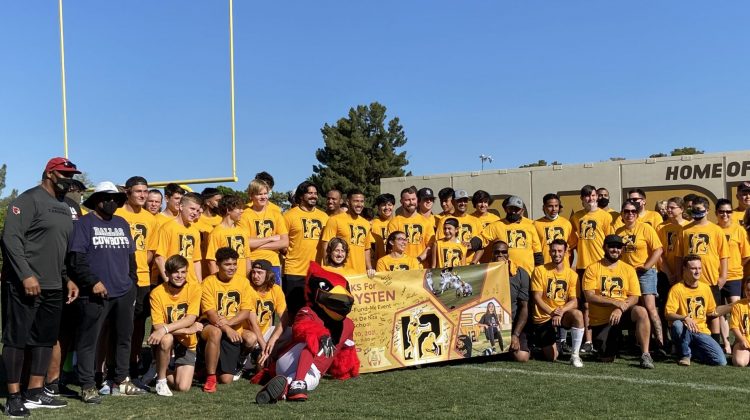 It’s been a long few months for Krysten Muir and her family, after a tragic car accident on January 24. In order to help with the cost and lift her spirits, kickers all over the valley came out to kick at Marcos de Niza. They call it ‘Kicks For Krysten.’

Coaches, kickers, and members of the community showed up to support Muir while getting kicking and punting reps in.

“Just seeing so many people here to show their support is truly amazing,” Muir said. “I’m still processing how this all feels to me.”

Alex Zendejas Jr. and Sr. partnered with the Arizona Cardinals to host this free event, with donations towards the Muir’s Gofundme to help offset the cost of medical bills.

“We’re here for you,” Zendejas Jr. said during open mic on Saturday. “You’re going to kick again and we’re going to be here to help you make it happen.”

Journey back to walking

Doctors told Muir she wouldn’t be able to walk again after the accident. She wasn’t going to let that happen and now she’s able to take steps with the help of a walker. Now they say she’ll be walking again by the end of the year.

Her parents, Kathy and Jeremy Muir, see their daughter as a shining light in the community because of how much support and help they’ve received. They’re just grateful to see their daughter alive and finding ways to stay positive while also defying the odds by making steps towards a full recovery.

“Just seeing her stand up, let alone walk with the walker and seeing the distances she’s gone already is just wonderful, it’s pretty easy to keep our spirits up.” Jeremy Muir said.

Muir is stubborn, according to her parents and herself. That’s part of the reason why she’s in a position to impact the community through her grit, attitude, and story.

Her story spread far enough to reach former NFL punter Marquette King. After realizing what she’s been through, he decided to make an appearance.

Everyone say hey 2 @krystensjourney she was told she wouldnt be able 2 walk because of an accident she was in and look at what she’s doing! So glad I got the chance 2 meet you and your fam and thankful for @azkickingandtraining setting this up and making change in the community pic.twitter.com/OIzryrbJbp

Tragedy shows people who they really are and it can change your perspective on life. Muir is still processing her impact and situation, but she has a message for anyone who is dealing with anything similar to what she’s going through.

“This isn’t the end, just really push yourself to be the best and be better,” Muir said. “Tell yourself everyday ‘you got this’ it’s ok we’re going to be strong. We’re still here so now let’s make the best of it.”