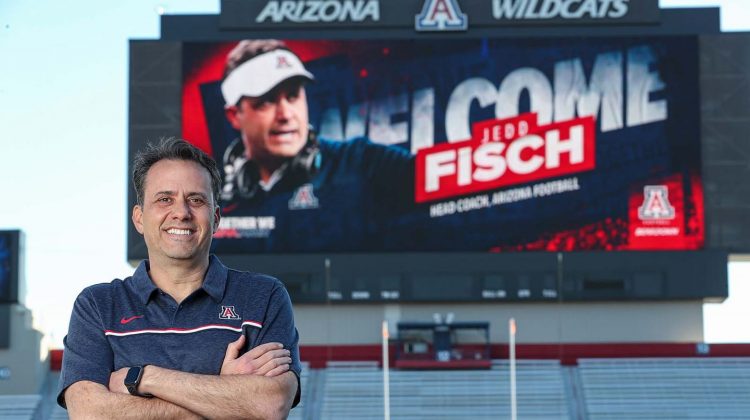 The Arizona Wildcats have two practices remaining on Tuesday and Thursday, before concluding their spring work with the annual spring game on Saturday. The new regime led by Jedd Fisch is busy trying to change the culture of a program that has lost 12 consecutive games. So far, the team feels ready to make some noise in 2021.

New leadership is also in place for the basketball team, with the hiring of Tommy Lloyd from Gonzaga last week. He’s wasting no time adjusting to Tucson, after speaking with the team before the second spring scrimmage on Saturday night. Him and Fisch are building a relationship because of their desires to return both programs to glory.

Most Saturday spring practices are held during the day, but Fisch opted to have his team play under the lights with limited fans in attendance. He’s trying to create the best atmosphere possible to keep his players engaged and on their toes. He’s even letting them celebrate touchdowns and big plays, even though he is part of the Belichick coaching tree, where that doesn’t always fly.

“It was great to get these guys under the lights,” Fisch said. “It was nice to have have a nice crowd, I thought that was really cool that we had a good group come out to watch the boys play. They celebrated big plays a lot, I’m letting them have fun.”

One player garnering attention from coaches and Tucson media alike is redshirt junior wide receiver Stanley Berryhill III. Fisch says he’s making the most positive plays and the least amount of negative plays. Berryhill says he’s still learning the playbook but he’s feeling great about this coaching staff and the position the team is in at this moment.

Gunner Cruz wasn’t able to throw to receivers much before spring ball began, so timing has been a bit of an issue with his ability to overthrow the ball. But, the adjustments are coming.

“When you get a new quarterback there’s always a grey area where we don’t really have chemistry yet,” Berryhill said. “So over the summer we’re going to work hard to make sure we get our timing down.”

The spring game is this Saturday at noon. University of Arizona alums Rob Gronkowski and Teddy Bruschi will be guest coaching on the sidelines to see the progress of this program with their own eyes.