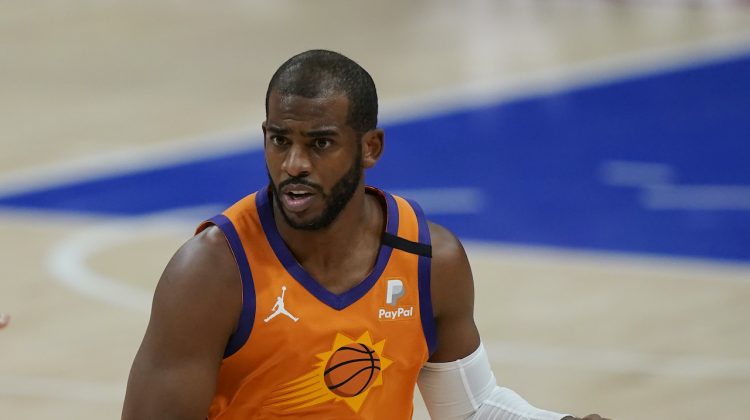 The first half of the season places the Phoenix Suns (24-11) in the national eye of NBA fans and media members. Even if the league only rewards them with four national games in the second half.

It’s well documented that Chris Paul is changing the course for a franchise that hasn’t made the postseason in a decade. National NBA Radio Host for SiriusXM, Frank Isola, isn’t shocked because CP3 did this last year for Oklahoma City.

“Las year when Chris Paul went to Oklahoma City, everyone figured he’d get bought out,” Isola said on The Brad Cesmat Show. “Not only did he embrace the idea of being in Oklahoma City and the role that he was in, but he exceled at it and the team became a playoff team. He elevated a young group of players… just like he’s doing in Phoenix.”

The mantra in the valley surrounding the Suns is changing from excitement about youth to hunger for winning. Paul offers the elevation they’ve been searching for since Nash and crew were in town. Now they’re a second seed heading into the second half of the season.

Fans feel that the league often overlooks Booker, hence his origianl All-Star snub this season. It makes sense when the Suns are cellar-dwellers. But now, they’re in line to snap a decade of mediocrity and Booker is reaping the rewards. He’s averaging 24.9 points per game on 49 percent shooting and 36 percent from beyond the arc.

While not initially named an All-Star this season, Book did make it as an injury replacement for Anthony Davis, something Isola believes is common when coaches know injured stars won’t play in the midseason contest. Booker was then replaced by Utah Jazz point guard Mike Conley after he aggravated his left knee.

“The accolades will start coming once [the Suns] start winning,” Isola said. “I put a lot of stock into winning.”

Booker’s knee won’t keep him from playing against the Portland Trailblazers tonight.

Entering the second half of the season with the second best record in the NBA puts the Suns in prime contention for key additions at the deadline, which is March 25. The “weakest” position on the roster is the forward spot, mainly the four. Frank Kamisnsky is playing well in that role, but there are some options out there.

There were rumours about pursuing Blake Griffin, who ultimately signed with the Brooklyn Nets. LaMarcus Aldridge is a trade piece for the San Antonio Spurs, but they’ll likely waive him after the deadline if a trade isn’t completed. Isola likes Aldridge, but believes Rockets forward P.J. Tucker is the better fit for the Suns.

“I like P.J. Tucker a lot,” Isola said when discussing which player he’d target in Phoenix. “The guy gives you toughness, he can knock down that corner three, and he plays his role.”

There are also rumours that the front office is looking at Haasan Whiteside and Javale McGee as potential front-court depth options. It’s been awhile since the Suns were buyers at the deadline.

Being a two-seed at this point in the season raises expectations for any team. Maybe even more so for the Suns, because Phoenix is a basketball town that loves supporting their hoops team. This team isn’t just a playoff team, but one that expects some type of playoff run.

“There’s some really good teams in the west, it’ll depend on what matchups they draw,” Isola said about playoff expectations. “The big thing in the Western Conference will be the health of Anthony Davis… There’s a path for the Suns to get to the Western Conference Finals, but a second round appearance would be a win for the organization this year.”

In good position for the second half of the season 📈 pic.twitter.com/hxuwHWigAI

The town is excited. Booker is happy. Coach Monty Williams is putting this team in positions to compete everynight. The Suns are must watch tv and if you live in Arizona, you’ll want to tune in on a nightly basis.