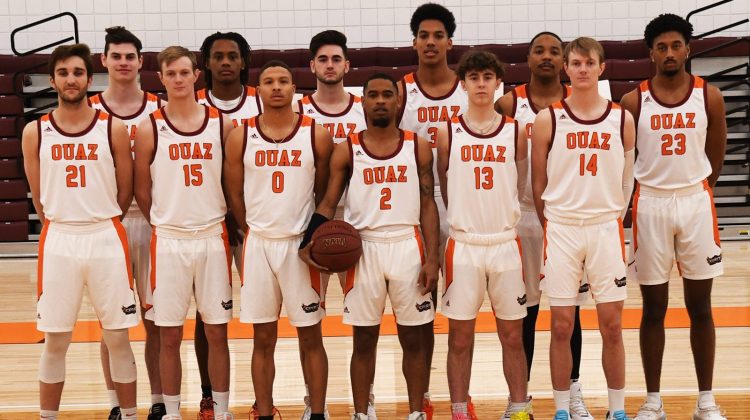 The whistle blows to begin men’s basketball practice for Ottawa University, two hours before the high school P.E. classes take over the gym.

OUAZ opened their inaugural men’s basketball season in the fall of 2017, concluding their first season with a respectable 15-13 record. Now, in just their fourth season in program history, the Spirit fight for a national championship with the National Christian College Athletic Association.

More obstacles faced the OUAZ Spirit in the 2018-2019 season, their first year as a member of the NAIA, with nine games against top-25 teams, including against established in-state rival, Arizona Christian. A 5-23 season left much to be desired but still allowed the program to spread its roots.

Athletes would take the daily 15-minute drive from Willow Canyon around 7:30 a.m. to Ottawa’s campus, located in Surprise’s Civic Center area, to attend classes following the early morning grind. Matt Keeley, OUAZ’s head coach for all four seasons, had some difficulties sharing the vision of OUAZ with recruits while the facilities were constructed.

One recruiting strategy the coaching staff used was the idea of being “the first.” The first player to score for the program. The first team to win a game. The first squad to win the new facility. The 2019-2020 team became the first to play in the state of the art, Faith Arena, and beat a ranked opponent, earning an 11-17 record. Now, the 2021 unit, with a 13-5 record, becomes the first team to not only earn a postseason game but to win and advance to a national championship.

A member of one of the most talented conferences in the NAIA, the Golden State Athletic Conference, Ottawa gets the opportunity to play against NAIA teams who can give some NCAA DI teams a run for their money, such as Arizona Christian, The Master’s University, and Westmont College.

As cliché as the term has become, ‘trusting the process,’ through strenuous stretches has proven to be true. Another ‘first’ in 2021 is Ottawa’s first four-year senior. Team captain, Marcus Williams, is the only athlete who has played for the Spirit since their inception. Williams red-shirted his freshman year in Ottawa’s inaugural season in 2017-2018.

“He’s a guy that we play all the time, a local guy, a guy who knows [Assistant] Coach [Adam] Hepker and I as well as anybody,” Keeley said. “He’s the voice that we rely on and a guy who we refer to as our heartbeat.”

Williams evolved into one of the most consistent players in OUAZ’s early history, starting in all 18 games and operating as one of the leading facilitators.

OUAZ walked off their three-hour flight from Arizona to Indiana as the representative of the NCCAA West Region bid on March 17. The NCCAA is made up of over 80 four-year universities across the nation as a school’s secondary affiliation along with being a member of the NAIA or NCAA.

The NCCAA bracket is composed of just eight teams across the NAIA and the NCAA’s Division II and Division III, with games taking place in Winona Lake, IN. The city embraces the annual college basketball spectacle with restaurants and hotels adding to the ambiance with banners and updated brackets throughout the town to create a national championship atmosphere.

LET’S GO!!!!! @OUAZMBB (when you’re so excited standing in your living room and the live stream ends and you’re wishing you were there and pops up on your phone! EPIC!!! Let’s get one more guys!!! OUAZ!!!!!!! pic.twitter.com/S5YIXVRflu

After leading the team in scoring this season, Kam Malbrough and Josiah De’laCerda blew the doors off the NCCAA tourney, combining for 86 points in their two tournament games against fellow NAIA schools Southwestern Christian College and Alice Lloyd College. The Spirit dominated, never trailing in their games.

While Ottawa cruised through the bracket, their championship opponent became the most battle-tested in the tournament. The University of Northwestern (MN) is the 2010 NCCAA champion and entered the bracket as the fourth overall seed, winning their two games by 5 combined points. Their journey was highlighted by eliminating the host and top seed, Grace College, Thursday night.

“We’re embracing the challenge that goes along with it,” Keeley said. “We’re loving the trip, we’re competing at a high level, we’re playing as well as we have all year.”

MBB | Kam Malbrough has been named to the @gsacsports MBB All-Conference Team. He becomes the first player from @OUAZMBB to be named to the team.

Malbrough averages 18 points and 5 assists per game this season.

Like every athletic program playing through COVID-19, the journey has been tedious and arduous. Ottawa suffered two separate month-long stretches without a game due to COVID-19 cancelations. The program took that opportunity to capitalize on time, accumulating over 100 practice days over the season.

While team bonding activities were lacking due to the pandemic, the team attacked COVID-19 as a unit and grew a chip on their shoulders together with the idea of toughening up to get through this COVID-19 era together. Coach Keeley attributes the team’s attitude to their team motto, taken from James 1:2.

“Consider it pure joy, my brothers, whenever you face trials of many kinds, because you know the testing of your faith develops perseverance. Perseverance must finish its work so that you may be mature and complete, not lacking anything.” (Bible.org)

“Whenever something happens, we try to challenge our guys and hold our coaching staff accountable to say, ‘our response is going to be good,’” Keeley said.

Whether it’s a bad call from an official, canceled games or practices due to COVID, or anything negative, the team creates a positive from it. Ottawa took that attitude to the NCCAA tournament, now with an opportunity to cut down the nets and raise a banner for the first time in Faith Arena.

While it isn’t the NAIA national championship, the program and athletes are jubilant to take part in the process. The opportunity to play for a national title seldom arrives for a program still in its infancy.

Tipoff between Ottawa (AZ) and Northwestern (MN) for the NCCAA National Championship is Saturday at 2:00 p.m. PT. You can follow the team for updates at @OUAZMBB.