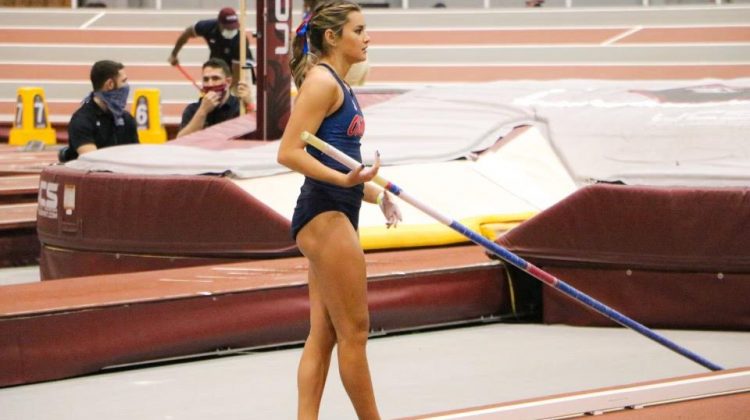 Most college athletes need time to master their sport at the NCAA level. Often times, they must endure repeated failures in competition in order to excel, and only a select few are able to experience success the right away.

Ole Miss freshman pole vaulter Samara McConnell only needed one meet to announce her arrival on the NCAA track and field scene. The Queen Creek native and Perry High School record holder started her college career with a bang, winning the Vanderbilt Invitational in her NCAA debut before adding another win three weeks later at the South Carolina Invitational.

Just four events into her college career, McConnell already boasts the third-best vault in Ole Miss program history. Her early success has proven to be much more than just a case of beginner’s luck, as she has continued to improve throughout the season and is already within reach of qualifying for the NCAA track and field championships.

McConnell’s grand entrance into college athletics is the result of a long and arduous journey that began some 1500 miles away from Oxford.

Born into an athletic family, McConnell competed as a gymnast for 10 years before deciding to take up track and field when the mental strain of gymnastics became too great to handle. Her experience as a gymnast made for a seamless transition to pole vaulting, which quickly became her signature event.

No dice for anyone at 4.18m, but Samara McConnell will leave with her second collegiate win in three tries.

Her winning height and new PR of 4.08m (13-04.50) pushes her to No. 7 all-time at Ole Miss and ranks sixth nationally among freshmen this season.#HottyToddy pic.twitter.com/omXgwT1adx

“Everything I learned in gymnastics is why I’m here in the first place,” McConnell said. “How we get upside down, we use those on bars in gymnastics. How fast you run down the runway is exactly what you do on the vault event in gymnastics, so it helps out a lot.”

Accolades were plentiful, but scholarship offers proved more elusive. McConnell contacted numerous coaches at out-of-state schools in hopes of winning them over and ran into many dead ends. Ole Miss assistant coach Brian Porter was one of the few who recognized her potential, and she ultimately decided to continue her career in the Magnolia State.

“He seemed to be the only coach that actually believed in my skills,” McConnell said. “Most collegiate coaches were like ‘you have a better chance of staying in-state,’ but when I talked to Porter he was like ‘no, you can be good. If you come here, you’ll be good.’ Since he put in so much belief in me and so much faith in me, that’s basically why I picked [Ole Miss].”

While McConnell was eager to reward her new coach for his faith, she first had to survive the rigorous offseason workouts that he had in store for her.

To get in peak form for competition, she would run up and down nearby hills, braving the uncomfortably humid conditions of the deep South. The training was intense, but she saw it as a necessary part of preparing for the season.

“Since I’ve been here, I can tell 100 percent that I’m stronger and faster,” McConnell said. “I’m using 10 times bigger poles than I ever did in high school, which helps a lot, and I can just see my technique improving. If I compared myself from high school to now, to me it’s completely different.”

Those agonizing workouts began to pay off immediately once competition started. At the Vanderbilt Invitational, McConnell’s first college meet, she performed like a seasoned veteran rather than a debutante. She won the event easily with a vault of 3.95 meters, the eighth-best mark ever by an Ole Miss competitor. College track and field had officially been put on notice.

“I didn’t expect much,” McConnell said. “I wanted to do good just for myself, but I wasn’t expecting [to win]. As the meet went on, I was clearing the heights like a normal meet, and we got to 12’11” and all of a sudden, all these girls are not making it. I was just sitting there like ‘no way is this happening.’”

McConnell’s successful debut set the bar high, but she has continued to raise it both figuratively and literally as the season has progressed. After an eighth-place finish in her second meet, she rebounded strongly with a victory at the South Carolina Invitational the following week, clearing the four-meter mark for the first time.

At her most recent event, the Music City Challenge, she narrowly missed out on another win, setting a new personal record at 4.20 meters but finishing second via tiebreaker.

As well as her transition from high school to NCAA competition has gone, McConnell has had to learn to deal with the praise and recognition that her success has earned her. Humble and soft-spoken by nature, she prefers to focus on continually improving her performance instead of basking in the spotlight.

“It’s like a 50-50 thing,” McConnell said. “Of course you like being the center of attention but I also won’t walk into a competition and be like ‘oh, I’m number one at Ole Miss.’ Usually I like to keep things to myself. I like to be in it for the moment and then after the moment is done, I regroup myself and focus on what’s next.”

Based on her results so far, the sky appears to be the limit for McConnell. In just over a year’s time, she has gone from under-the-radar recruit to budding superstar, but she is far from satisfied.

Hitting the 14-foot mark and qualifying for the NCAA championships are her two main goals for the remainder of the season, and if she continues on her current trajectory, it seems almost inevitable that she will meet them.

With many competitions still to come this season and three more years of eligibility after that, McConnell is only getting started.