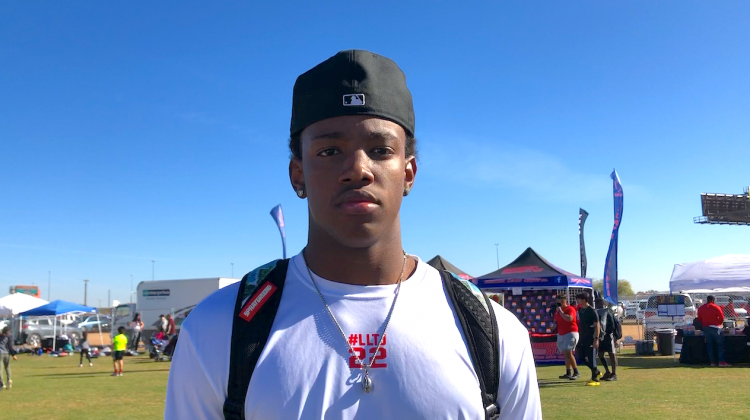 Class of 2022 Desert Ridge athlete Lance Holtzclaw has had a busy couple of weeks. He’s been a standout on the 7-on-7 circuit and is adding offers left and right.

In six games as a junior, the 6-foot-4, 200-pound athlete caught 13 balls for 186 and notched 27 tackles, nine tackles for loss, an interception and fumble recovery.

He’s played 7-on-7 with True Buzz West Coast as a wide receiver and using the offseason to fine tune his skills.

“I’ve seen my footwork get better as far as moves off the line, getting by defenders off the press,” Holtzclaw said. “I’ve seen a lot of body control when I go up for jump  balls. I just feel like I’ve been improving my game a lot.”

While he is playing as a wide receiver right now, colleges are recruiting Holtzclaw to disrupt in the front seven of a defense.

“Really pressure that quarterback, coming out of the line or coming up from a standing backer,” Holtzclaw said. “(Schools) also want me to drop into coverages as well, just want me to be a real versatile player that can do everything.”

That versatility doesn’t just apply to a position group either.

It can be a lot to juggle playing both sides of the ball, but the 2022 athlete says he understands each aspect of the game of the game from this experience.

“Playing on offense helps my defense a lot in terms of my hands, getting hands off me when I’m playing defensive line and playing outside backer,” Holtzclaw said. “It helps a lot with my feet getting around the corner on people and everything ties together with each other being versatile.”

Holtzclaw also spoke highly of new Desert Ridge coach Roy Lopez. While they haven’t been able to spend a ton of time together, Holtzclaw looks forward to playing under him.

“He’s a really great guy, funny guy while you’re (working out) and he works hard.”

The snowball effect is in full charge for the athlete’s recruitment, and he’s enjoyed these initial conversations with coaches.

“It’s just like everything’s been flooding in,” Holtzclaw said. “It started off with one and it kept falling one after the other over and over and over again.”

He researched many of the schools that have offered and is building relationships with the coaching staffs.

At San Diego State, he feels a connection to cornerbacks coach Demetrius Sumler. He already hit it off with members of Kansas State’s staff. Three University of Arizona coaches have talked to him already and he’s taken a virtual tour of the Wildcats’ facilities and campus.

“You hear good things from people from Arizona that are going out to Iowa State,” Holtzclaw said.

“It looks really promising and it shows that everyone who is going out there is having fun. It helps out a little bit when you talk to people that are already there and get their opinions.”

Air Force and Vanderbilt both provide compelling opportunities on and off the field for Holtzclaw.

“Air Force is very beneficial other than just football. Football, you’re going to play good competition with them still and it’s going to be fun to play there…Everything is so beneficial for life after football.”

Vanderbilt has tried to increase their recruiting presence in Arizona and have connected quickly with the playmaker.

“First SEC offer to come in. That was obviously really big and then I talked to (defensive end coach Jovan Haye). He’s a really cool guy. He is going to keep a good relationship. He’s a funny guy. We can talk football and we can talk off football and relate to each other…you definitely have to have a good relationship with the person who is coaching you when you get there.”

If he joined the Beavers, it’s hard not to picture Holtzclaw filling a role similar to what Hamilcar Rashed Jr. did at Oregon State. The former Cesar Chavez & Chandler standout carved out a decorated career in Corvallis and the two share a similar skill set.

The versatile athlete values the relationships being built and will continue to navigate this process leading into his senior season.