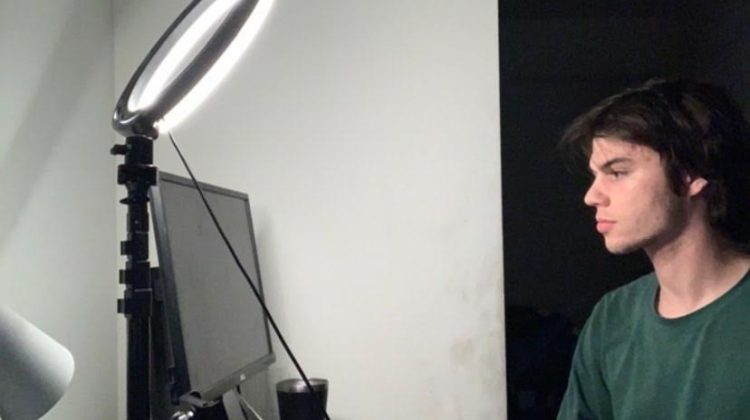 The Walter Cronkite School at Arizona State helps teach its students how to tell stories in unique ways. The different perspectives and various ways of storytelling allow students to brand themselves in every way possible, whether it’s on Twitter, LinkedIn or even on their own website. No Cronkite student better resembles this mindset than Theo Ash.

Over the past five months, the sophomore has exploded in popularity on the video-sharing social media app TikTok (@theoashnfl).

Ash, currently sitting at 74,000 followers and 6.1 million video likes, gained his following on the app by creating videos, all one minute or less, in which he gives analysis on NFL related-topics. His videos range from player reviews, draft forecasting, and team predictions to general hot takes and all-time player rankings.

Ash especially gained heavy momentum on the app going into 2021. While Ash recognizes his momentum, he doesn’t believe it to exist in NFL games – one of his patented hot takes.

Hot takes like these have given Ash fame on the app. He currently is on the TikTok’s Creator Fund, a way the app can pay its’ bigger named video creators. The amount of money creators can make depends on a variety of factors, such as the number of views, the authenticity of the views and the level of engagement the TikToks receive.

While Ash realizes the sustainability of these funds is volatile, he hopes to use his success on the app as a launchpad for further opportunities.

“I feel like this might be me just being vain. [But] of all the platforms of anyone at Cronkite, I doubt that anyone’s is as big as mine. But I could be wrong on that,” Ash said. “The trick is to leverage that into a legitimate job because TikTok…it’s not a legitimate job.”

Ash plans to collaborate with fellow TikTok stars Blaiden Kirk and Matthew Sponhour in future projects outside of the app. Combined, the three TikTokers have over 410,000 followers. Ash began making videos in September of 2020, despite his initial skepticism of the app.

“My sisters had TikTok for a long time back when it was Musical.ly, and I just hated the app. I was like, ‘this app is for little girls doing lip synching,’” Ash said. “I finally caved. I’m like, I’ll make a TikTok account, because I know that it’s probably the easiest platform to get views on, just the way the algorithm works.”

“So then, I got a TikTok account, and I started talking about sports. And sure enough, I was getting better engagement on TikTok than I was on my tweets, pretty much immediately,” he added.

TikTok’s algorithm causes users to see certain videos based on their location, liked videos, hashtags used and more. This is a likely reason as to why Ash’s first video put his name on the map.

“I had this take really early that Larry Fitzgerald wasn’t a top-10 wide receiver of all-time, and people got really, really mad at me for that,” Ash said. “It hit the Arizona algorithm, and I was just getting lit up for that. But I mean, it grew my notoriety. I wasn’t saying that just to say it.”

From there, Ash became a recognizable brand on TikTok, so recognizable that the founder of Barstool Sports, Dave Portnoy, even had a brief run-in with Ash.

Back on January 15th, Ash made a TikTok showing his NFL Draft skepticism on former Ohio State quarterback Justin Fields.

“I made this video on Justin Fields, the Ohio State quarterback, and I said he wasn’t very good at reading the field, which is a common criticism of him on any scouting report,” Ash said.

Barstool Ohio State (@barstoolohiostate) responded to the video with a video of their own, disputing Ash’s claims and ending the video with “Next time, just admit you have no idea what you’re talking about.”

Ash responded to Barstool Ohio State’s video, also making a video showing his displeasure with the Barstool Fund and Dave Portnoy.Portnoy Responded with a Tweet (see below) and a post published on barstoolsports.com.

Some loser went on a rant calling me a scumbag for raising money for small business. Old Dave would have destroyed him. New Dave is too mature for that shit. pic.twitter.com/x4iZfs5yej

The feud lasted over the course of a few days, with TikToks, Tweets and Barstool Sports blog posts being created as a result. Even today, Ash does not hold back on his opinions of Barstool Sports.

“You see a lot of sexism in this industry. And you see a lot of toxicity towards female journalists especially, and I think Barstool is the biggest contributor to that,” Ash said. “I’ve always disliked Portnoy, but you know, I wasn’t going to come at Portnoy for no reason.”

In only a few months, Ash has gotten to experience life as an internet success and hopes it will benefit him in the near future. As the NFL calendar begins to turn its pages, Ash will primarily focus on the NFL Draft and analyzing prospects.

“I’ll watch three, four games of a prospect and then come out with a really, really brief overview of a player,” he said. “It’s not the most in-depth stuff, but it’s more in-depth than you’re going to get from any other person on the platform.”

Ash believes his TikToks offer short, concise NFL takes that can be easily swallowed – all in under a minute.

“They’re like bite sized little things for the draft. Here’s strengths, here’s maybe a weakness, here’s kind of what I expect from them. Then it’s over with a couple plays to just kind of describe what I’m what I’m seeing,” Ash said. “Film breakdowns of people are on different [platforms]. None of them are just going to download TikTok and start doing it. That’s kind of a Gen Z thing to do, and I’m kind of the first one to do it from a film breakdown standpoint.”