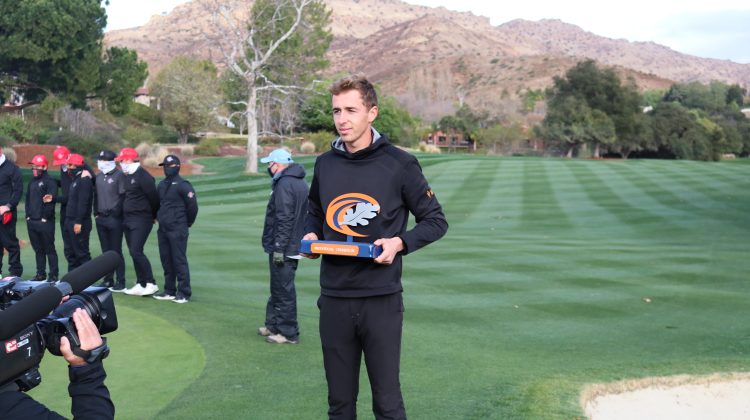 An over-used word, but one that fits the bill for the recent performances by Arizona State golfer David Puig. The sophomore from Spain won two individual tournaments for the Sun Devils, including The Southwestern Invitational by a record nine-strokes on January 27. He also hit clutch shots in the Copper Cup to seal a victory against rival University of Arizona early in January and helped ASU win the Amer Ari Intercollegiate in Waimea, Hawaii on February 4, winning the individual title there as well by four-strokes.

His performance has garnered national attention. Puig is one of the nominees for the Ben Hogan Award January Golfer of the Month, one of the top awards in college golf.

Vote for @PuigCorrius of @sundevilmgolf for Ben Hogan Award January Golfer of the Month honors! Like this post, as well as on Instagram and Facebook. The top vote getter on each social media channel will receive a committee vote. pic.twitter.com/lQAO921AmA

“It was a really great month,” Puig said. “I practiced so hard in the fall season with no tournaments… I feel like I kind of deserve it because I practiced really hard last year.”

This performance hasn’t been topped by a Sun Devil since 1991, when Phil Mickelson won three consecutive tournamants. Puig knows that adds pressure, but he’s ready to embrace all the challenges ahead of The Prestige in Palm Springs from Monday to Wednesday.

“I want to win this thing,” Puig said. “I want to be in the history of the Sun Devil family, it would mean a lot to me.”

Back-to-back victories have placed Puig in a great position, being ranked No. 2 in the country by Golfweek and No. 15 in the world by The World Amateur Golf Rankings.

Coming from Spain allowed Puig to fly under-the-radar compared to some of his teammates like Chun An Yu, but Puig expects nothing less than success for himself. His coaches and teammates see it everyday in practice, but even they’re blown away by the dominating start he’s had this season.

“When we recruited David we knew he was a super elite player and he’s known all along that we think he can dominate at this level,” ASU men’s golf head coach Matt Thurmond said. “Were not super surprised, but he was under the radar… he hadn’t played a lot of college events event yet.”

Last year Puig joined the team a few months later than everyone else, so he only notched four tournaments under his belt before COVID-19 halted play. It was never a matter of if he could do it, but when he would do it and Thurmond believes he can maintain tremendous success as long as he overcomes any “down” stretches he may go through.

While a season ending short in a global pandemic is difficult in its own right, Puig also had to overcome being able to learn English in a foreign country in order to adapt to the college golf lifestyle. He believes his teammates helped him during this period and he enjoys being with them on and off the course.

“Even though we’re teammates, we’re friends too,” Puig said. “They were really happy for me, they helped me a lot, they cheered for me the last day and they support me always.”

A #ForksUp fact: @PuigCorrius is first Sun Devil to win back-to-back tournaments since @Jareddutoit did it in February of 2017. pic.twitter.com/w7RWCVnMLD

One golfer that he draws comparisons with is Sun Devil alum Jon Rahm, who is also from Spain. Rahm comes around the ASU golf facility every once in awhile and actually played a round of golf with Puig during his first day with the team last year. Along with Rahm and his teammates, the new facilities are one of Puig’s favorite parts about playing for the maroon and gold.

This is unprecented territory for Puig, but he exudes confidence and is ready to do whatever it takes to win, individually and as a team.