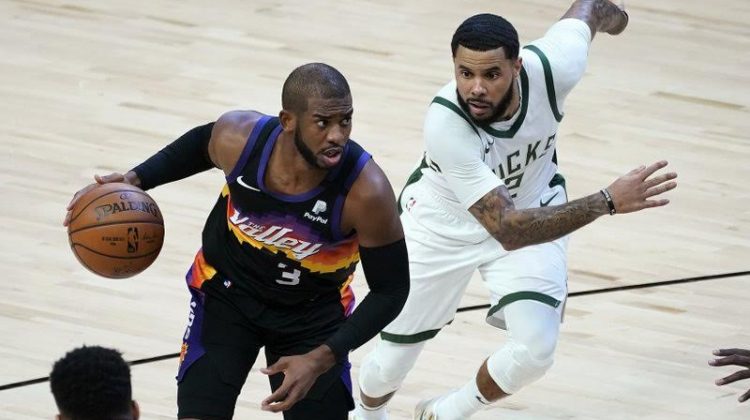 Many Phoenix Suns fans were expecting two players from the team to be on this year’s NBA Western Conference All-Star Team for the first time in awhile.

Instead, only one Sun was selected on Tuesday. Point guard Chris Paul was named a reserve, while Devin Booker was left off the roster. Booker is averaging 24.7 points per game, 4.3 assists, and 3.8 rebounds. Other members of the roster could be seen below.

As for Paul, the veteran point guard is averaging 16.6 points, 4.5 rebounds, and 8.5 assists at the age of 35. His assists per game are ranked sixth in the league and Paul had 19 dimes in last Friday’s game against the New Orleans Pelicans. The honor this year will mark CP3’s 11th All-Star appearance in 16 seasons.

Many opinions and cases will be made about All-Star snubs over the next couple of days and Booker’s name will be right in the mix of it all. This isn’t the first time that he’s been left off an All-Star Game roster, but this season had a different feel with the Suns sitting at fourth place in the west with a 20-10 record, including winning 12 of their last 14.

Devin Booker is the most disrespected player in our league!!! Simple as that.

Despite being snubbed, Booker made his first All-Star appearance as a replacement for an injured Damian Lillard last year, and he was still likely to fill the same void this year with an injured Anthony Davis currently on the Los Angeles Lakers.

On Wednesday, Booker officially was named to the All-Star team as Davis’ replacement. Nevertheless, the discussion of Booker not being originally named will still ensue over the next couple of days.

*Note: This story has been changed since its original publication since Booker was selected to the team.