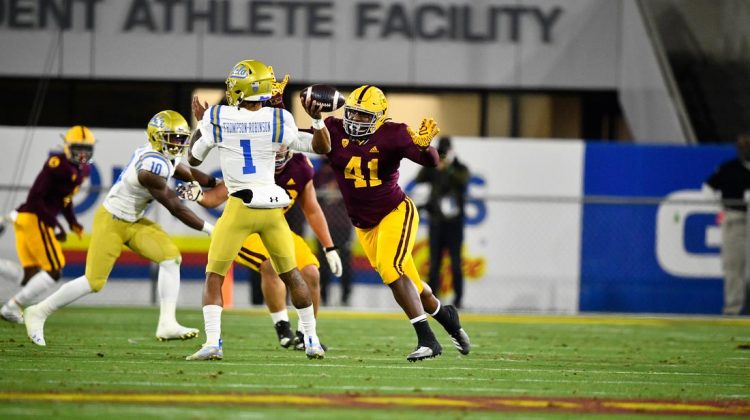 Arizona State pass rusher Tyler Johnson’s story is a lesson in persistence. From the moment he arrived on campus, Johnson faced uncertainty on the field, battling injuries and bouncing from position to position in hopes of making an impact.

It wasn’t until he almost walked away from football entirely that Johnson finally cemented his place as a star player for ASU’s defense.

A four-star recruit coming out of Highland High School in Gilbert, Johnson was recruited as both a tight end and defensive end. He ended up staying close to home, choosing Arizona State over a number of other schools because the Sun Devils allowed him to enroll late and attend summer classes, which he needed for eligibility reasons.

“A lot of the other schools weren’t willing to wait for me to come in late,” Johnson said. “ASU told me I could come in in January, months later, so that was a big deal to me. They were my first offer also, so it was kind of almost like a loyalty thing.”

It didn’t take long for Johnson to reward ASU for its loyalty once he got on the field. After redshirting as a true freshman and switching positions from defensive end to linebacker over the offseason, he impressed in his first year of action.

Johnson played sparingly in the team’s first six games but worked his way into the starting lineup for the second half of the season and finished the year with a very respectable total of four sacks and eight tackles for loss.

His success came in spite of a shoulder injury suffered in the opening game, which he chose to play through even though it seemed to get worse as the year went on.

“I tore my shoulder in the first game, on the first kickoff to start the season,” Johnson said. “I wanted to play so I just pushed through it. It got to the point where it was really hurting. I brought it up towards the end of the season and it was too late to [do anything about it]. That was probably prohibiting me from doing certain things on the field, but I just had to play through it.”

He underwent surgery after the season, but his shoulder continued to bother him well into the following year and had a noticeable effect on his performance.

While he managed to play in 10 games and recovered a game-sealing fumble against Florida State in the Sun Bowl, Johnson began to wonder if football was worth all the pain he was experiencing.

After intensive discussions with ASU’s coaching staff and trusted members of his inner circle, he returned to the team and laid the foundation for what would end up being his breakout season.

“It was more of an internal thing,” Johnson said. “I was breaking everything down. I was thinking, ‘I’ve been hurt a lot since I’ve been here.’ Seeing coach [Antonio Pierce] at the basketball games, we would sit down, we would talk, and he would tell me, ‘you’re going to be back before August 1st.’”

Pierce was right. Johnson returned to the team during the summer and moved back to his natural position of defensive end to complement ASU’s brand-new defensive scheme.

Although the team played just four games due to a shortened schedule, Johnson set a new career-high with five sacks and established himself as the Sun Devils’ premiere pass-rushing threat.

While he made his mark in every game, his most dominant performance came against UCLA, where he recorded 3.5 sacks and helped ASU claw back from a 17-0 halftime deficit. His decision to give football a second chance had paid off in a big way, as he was named first team all PAC-12 for the first time in his career.

“I missed spring ball and stuff, and it wasn’t really a good look on my behalf,” Johnson said. “I knew I had to take it even more seriously than I was before. After the first game, our coaches gave us our personal grades on how they think we played. After I looked at the sheet, I thought ‘okay, if I just keep playing like this, I’ll be good.’”

Coming off of a career year and having just earned his bachelor’s degree in Liberal Studies, Johnson has his sights set on continuing the progress he made in 2020. Having solidified his place at defensive end, Johnson aims to shed weight and improve his quickness in order to make life more difficult for opposing quarterbacks this coming season.

With a fully healthy shoulder and a renewed passion for football, 2021 is looking to be another stellar season for Johnson to add to his resume.