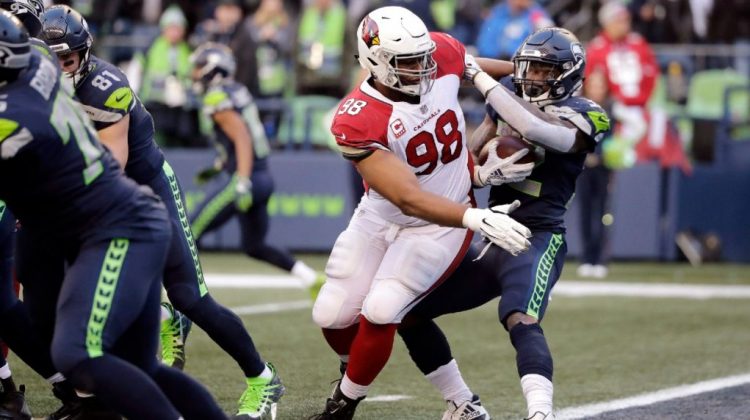 Arizona Cardinals defensive tackle Corey Peters has learned to deal with the ebbs and flows of professional football over the course of his 11-year NFL career.

While the 32-year-old Pittsburgh native has dealt with injuries, been through unrestricted free agency and received awards for his work off of the field, the 2020 season marked the first time he had experienced all three in the same year.

Entering the final year of a three-year contract with the Cardinals, Peters got off to a strong start before suffering a torn patellar tendon in the team’s 32-30 win over the Bills on Nov. 15.

Although Peters was not able to play in the Cardinals’ last seven games, he did not let the injury prevent him from finishing the season on a high note.

He continued to serve the Phoenix community through his foundation and was named the Cardinals’ nominee for the Walter Payton Man of the Year Award on Dec. 10. It is the second time in Peters’ career that he has been nominated, as he was a finalist in 2011 as a member of the Atlanta Falcons.

“It’s huge for me,” Peters said in an appearance on The Brad Cesmat Show. “I really enjoy getting down in the community and just being with the people, figuring out what they need and trying to lend assistance where I can.”

Peters has been at the forefront of numerous charitable activities this season, including a Thanksgiving food drive he hosted just nine days after his injury. However, his longest-standing venture is the book club he runs at South Pointe High School in South Phoenix.

The Coronavirus pandemic prevented Peters from conducting the book club meetings at the school as he had previously done, but he decided to hold the meetings remotely instead of putting the program on hold.

“We’ve been doing [the book club] for a while,” Peters said. “We just discuss the topics of the book, and really we just let the kids go where they want to go. Sometimes it gets to current events, the things that are going on in their schools. A lot of them go to different schools so it’s nice for them to be able to talk about their experience.”

The winner of the NFL Man of the Year Award will be announced on Feb. 6, the day before the Super Bowl.

If Peters wins, he will be the first Cardinals player to take home the award since Larry Fitzgerald did so in 2016. Peters said that having several teammates who run large charities of their own only adds to the honor of being selected as the Cardinals’ nominee.

“Being recognized for [helping the community] is always a great honor,” Peters said. “Especially when you’re part of a great organization with so many good guys on the team that believe in giving back to the community.”

Last week, @CoreyPeters91 and PEEP received a donation from @DesertFinancial and were able to hold a drive-through lights show, where every student from @SouthPointeEle received a @Target gift card as a holiday gift! pic.twitter.com/mpqnGAGfRL

Peters’ value to the greater Phoenix community is not up for debate, but whether or not he will be able to continue his charity work in the Valley is entirely in the Cardinals’ hands.

The Cardinals lost five of their last seven games after his injury, and the team could be looking to make serious changes on defense.

Even if Peters does not re-sign with Arizona, he has made an indelible mark through his presence in the locker room, his philanthropic work, and his steady contributions to the Cardinals’ defensive front.

“I’ve let it be known that I’d like to be back here,” Peters said. “But I also understand that it’s a business. I’m expecting everyone to be evaluated properly, and maybe change is coming. Whatever opportunities are out there for me, I’ll be looking forward to them.”