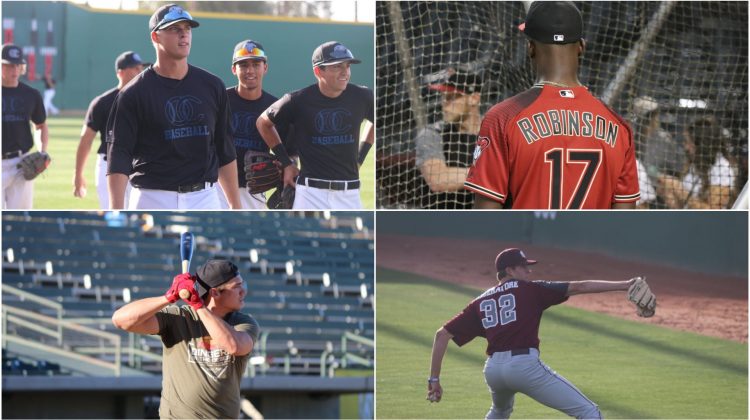 Baseball America recently released their top 100 prospects for the 2021 season, and the state of Arizona is well-represented. Whether it’s Arizona Diamondbacks, former Sun Devils or Wildcats or natives of State 48, the list is full of state connections.

The first overall pick of the 2020 MLB Draft would have crushed virtually every power-related record at Arizona State had college baseball not been put on hold last year. “Tork” leaves Tempe a career .337 hitter with 54 home runs, 152 runs scored, 130 RBI and a .729 slugging percentage. Baseball America compares him to Paul Goldschmidt and Paul Konerko, and he could see time in Detroit in the not-so-distant future.

No. 42 – Corbin Carroll – OF – Arizona Diamondbacks

Carroll was the first selection in a stacked D-backs 2019 draft class. The prep outfielder is undersized, but does just about everything right. Baseball America rates him as the best hitter for average and fastest baserunner within the Diamondbacks’ system. In his first season of pro ball, he hit a combined .299 with nine doubles, seven triples and two home runs in 154 at-bats between short season and rookie ball.

The talented pitcher out of Mountain Ridge High School was considered by many to be the best lefty in the 2018 draft. He was drafted by the Rays before being traded to the Cardinals in a package that brought outfielders José Martínez and OF Randy Arozarena to Tampa Bay. The deal reunited him with his best friend and fellow Arizona native Nolan Gorman (more on him later). In a season-plus, Liberatore threw 111 innings and posted a 2.59 earned run average, striking out 113.

The Tucson native was a hitting machine at New Mexico State, posting a .399 average with a 1.249 OPS, 37 home runs and 152 RBI in Las Cruces. After a strong Cape Cod League campaign, he jumped up draft boards and was selected with the No. 7 pick in the 2020 draft by the Pirates. Pittsburgh has had success with Arizona players with Cole Tucker, Kyle Newman and Trevor Williams on the Major League roster.

While Liberatore was the top lefty in the 2018 draft, Gorman was a top power bat. The best friends made headlines as top 20 picks a few years ago and are now teammates in the Cardinals’ system. In 188 Minor League games, Gorman has hit 32 bombs and driven in 106 runs with a slugging percentage of .483.

Varsho saw some time at the Major League level in 2020. While his defensive position is still up in the air, he’s been a top prospect within Arizona’s system for a few years now. He was the ability to be behind the dish and the athleticism to play the outfield.

The former Arizona Wildcat mashes. He was a 4th round selection in the 2016 draft and has hit 79 home runs in four seasons. He’s spent some time at the big league level, and the key for his success will be hitting for contact as well.

No. 93 – Kristian Robinson – OF – Arizona Diamondbacks

Robinson impressed early in his time with the Diamondbacks since signing in 2017. The Bahamian native brings athleticism and power to the equation. He’s been transforming his body thanks to a Paleo diet but has had limited reps due to the coronavirus pandemic and the impact its made on Minor League Baseball.

Like Corbin Carroll, Thomas’ frame may not be overwhelming but his power is. Baseball America sees similarities to Adam Eaton’s and Brett Gardnder’s games. In two years, Thomas hit .312 with 37 doubles, 13 triples, 12 home runs, 82 RBI and 27 stolen bases in 170 games. Thomas comes from a baseball family. His father has been the Chicago White Sox’ strength and conditioning coach for 17 years.