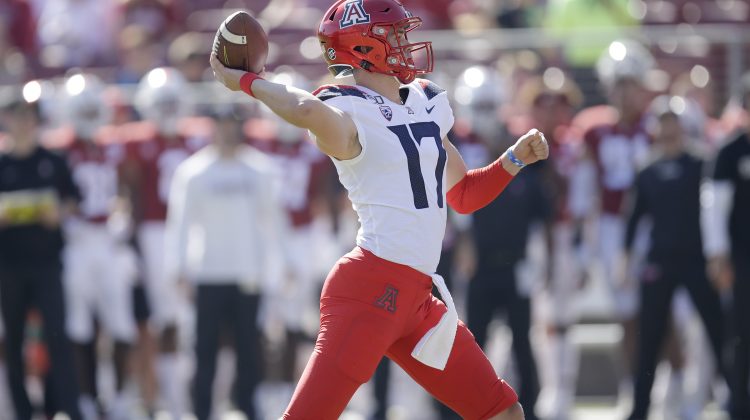 It appears dominoes are continuing to fall in the aftermath of Kevin Sumlin’s firing at the University of Arizona. On Thursday, it was reported that sophomore starting quarterback Grant Gunnell is planning to enter the transfer portal.

A Sumlin recruit out of St. Pius X High School in Houston, Gunnell had previously committed to Texas A&M until flipping to the Wildcats when Sumlin left for Tucson.

In his two seasons at Arizona, Gunnell threw for 1,864 yards and 15 touchdowns while completing 66.5 percent of his passes.

As a freshman, he stepped in for former starter Khalil Tate, playing in eight games and throwing nine touchdown passes. Gunnell performed admirably this year before a shoulder injury sidelined him for a few games.

With the open recruitment, there was also this interesting report from Max Olson of The Athletic.

One note on Arizona QB Grant Gunnell entering the transfer portal, per a source:

Arizona has indicated it won't grant his release if he picks a Pac-12 school or any school they're scheduled to play in 2021-2023.

Entering the portal does not mean that Gunnell can’t return to Tucson, but other schools can now recruit him. Gunnell’s backup this season was former Gilbert High School star Will Plummer. Other quarterbacks on the depth chart include Rhett Rodriguez out of Catalina Foothills High School in Tucson, and Kevin Doyle.

Gunnell would join his former high school teammate, Boobie Curry, and leading receiver Stanley Berryhill Jr. as Wildcat players who have entered the transfer portal since Sumlin was dismissed.