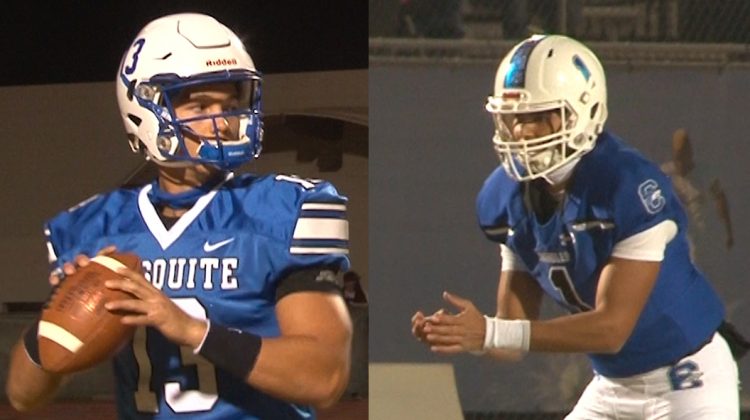 Friday night playoff football is here despite it being well…. 2020. Unfortunately some programs weren’t able to even start a playoff run after the work they put in. So it’s a privilege for those who get to play as they chase a ring. This goes beyond the players and coaches, but extends to the marching bands, cheerleaders, alumni, and communities. And from the energy at multiple games tonight, those involved aren’t taking anything for granted.

A brisk night, @cactuscobraband & spiritline enjoying the night with the fans. #FridayNight360AZ

Tried to get all of the field rush LOL

Mesquite entered as the favorites, in large part due to 2021 five-star quarterback and Oregon commit Ty Thompson. He started off scorching hot, leading his team on a four play, 60 plus yard trip to pay dirt. But then the Crusaders’ defense stymied him the rest of the first half, forcing an interception in the end zone and another one on a tipped pass near the red zone. Thompson faced constant pressure on deeper routes, forcing him to overthrow his targets a few times. The Crusaders trailed only 7-3 at half because the Wildcats defense also was ready to play.

After a long drive, Thompson was picked off by Hayden Myers. @mesqwildcatFB up 7-0

While I didn’t physically watch the second half, the Wildcats figured it out and won 27-10. In the second half, Thompson threw two touchdown passes and the defense had a pick six from Dylan Lorenzen-Hrenko. Mesquite will play No. 2 ALA-Queen Creek in the 4A semifinals next week.

The open division runs through Chandler and Hamilton. That’s a fact.

The Wolves led 24-0 at halftime en route to its 52-0 shutout of the Scorpions. The starters stayed in the game well into the fourth quarter, until the final offensive drive with a little over five minutes remaining. Running back Eli Sanders led the charge for the Wolves with three rushing touchdowns in the first half. UCF commit Mikey Keene threw two second half touchdowns, leading his reciever both times. Future Oregon Duck Brandon Buckner kept up his intensity in the second half, at one point recording two consecutive sacks and forcing a rushed throw. His partner in crime, Zion Magalei, also had a big night recording one sack in the second half and stuffing the run on multiple occasions.

The Wolves now have a showdown with No. 5 Liberty in the Open 8 semifinals.

Playoff football is here in Arizona despite everything that has happened and is continuing to occur this year. Enjoy it.