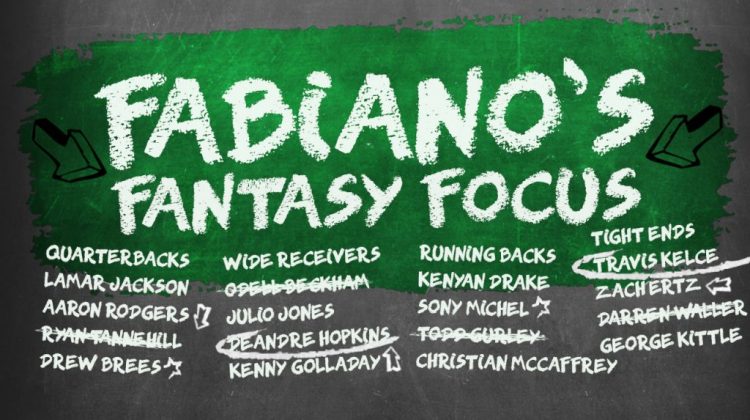 Here are some highlights from our most recent conversation (November 24) with the Fantasy Sports Writer’s Association Hall of Famer.

Who are some waiver wire QB’s to keep an eye on this week? “Derek Carr is a good play. And remember, no byes this week so this is for desperate people in 2QB league teams because you are going to start who you are going to start. Philip Rivers and Kirk Cousins, you can add, but I don’t love their matchups this week. Daniel Jones has also given people 20+ points in two of his last four games and has the Bengals. That’s a good matchup with a 2QB option.”

How about waiver wire needs at running back? “Wayne Gallman is coming off a bye and he had a touchdown in four straight games before the bye. He’s got the Bengals this week so he should be added and could be started this week. James White also got dropped in a ton of leagues because he hadn’t done anything and Rex Burkhead is now out. White played 39 snaps last week, had 11 touches and has got Arizona. I could flex him this week. And then Frank Gore. La’Mical Perine has that high ankle sprain. Adam Gase loves Frank Gore. He could be 50-years-old and Adam Gase would start him. We’re looking for warm bodies at this point and Frank Gore is worth an add.”

We’re getting closer to playoffs. Any advice you’d have for playoff teams? “If you’re heading for a playoff berth, handcuff your top backs. Chris Carson should be back this week. Make sure Carlos Hyde isn’t out there. If you’ve got Josh Jacobs, pick up Devontae Booker. Be smart.”

Who should get a look for receivers on the waiver wire? “Cole Beasley. Remember him? He’s coming off a bye week and the game before against Arizona, he went bananas and had almost 21 points. John Brown is banged up. They’ve got the Chargers this week so Beasley could be worth a look. Jalen Reagor could be worth a look and a flyer in some leagues against Seattle. Their defense has not been good against wide receivers. Even Breshad Perriman, I know it’s the Jets but he’s had a couple of good games in a row and the Jets are always throwing in the second half because they stink and are trying to eliminate deficits.”

Zach Ertz has been out but is possibly back on Monday night. Greg Olsen is out. How should both of these tight end situations be monitored? “The Ertz situation is one to keep tabs on. If Ertz isn’t back, Richard Rodgers hasn’t been getting involved in the offense so that’s a tough situation. And then Will Dissly is back on the radar because Olsen is out for the rest of the year. As my friend Bob Harris would call him, it’s the Diss Missile. I love it. He’s worth a look. ”

Kickers are people, too. Who’s been standing out to you with splitting the uprights? “I’d be remissed if I didn’t mention my guy Tyler Bass in Buffalo. He’s a kicker but I don’t care. Last game, he made field goals of 54, 55, and 58 yards with 18 points and 14-plus points in three of his last four games. He’s got the Chargers this week. Could be a high scoring game. Folks, points are points. Tyler Bass has been really good.”

Suns and Bridges Get New Contract Done - https://t.co/iNzrXLnqpa via @sports360az
View on Twitter
0
3

Fumble by @CasteelFootball recovered by WF https://t.co/FZ42tlYVU0
View on Twitter