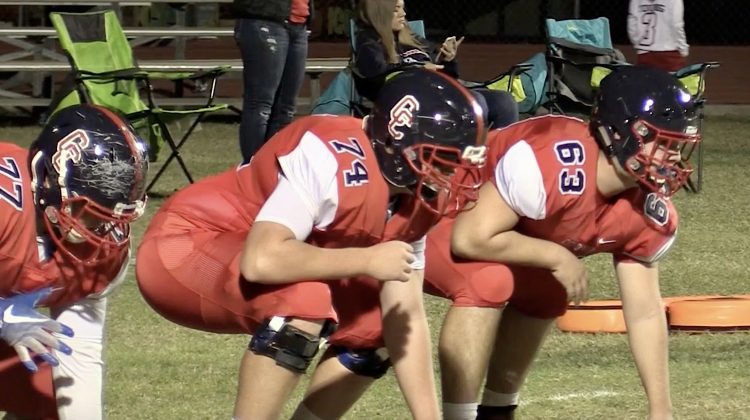 Half of the state is in the postseason, the other half is eyeing a spot into their state tournaments. This notebook is full of big games on the west side this Friday night with every single game potentially meaning fighting for a championship, or ending their season this week.

While these two teams have only played eight times in history, nearly all of them have been barn burners. While Centennial owns a stout 6-2 all-time record against Liberty, the average margin of victory in those eight games is just eight points. This meeting is arguably the second most meaningful game in this matchup’s history with both teams ranked by MaxPreps in the top-five in the state. Many believe that both teams should qualify for the Open 8 Playoffs, but the loser of this game could very well be kicked out.

While a committee will decide the Open 8 Playoff, the 6A State Tournament will be ranked by the AIA’s usual algorithm. The Coyotes have the most to lose in this game. A loss to Liberty would make them 0-3 against likely Open 8 contenders, Chandler, Hamilton and Liberty. Since only eight teams qualify for the condensed State Tournament, a loss could also kick Centennial out of the top eight in the 6A rankings, not only removing them from Open 8 contention but also a 6A State Tournament spot.

While this is the first season for Centennial in 6A, it’s not the Coyotes’ first time in the AIA’s biggest and baddest conference. Centennial earned the state championship in 2015 when the AIA created a 17-team juggernaut Division I conference, defeating Saguaro in the regular season and Hamilton in the postseason. After a loss in last years’ Open 8, a path to redemption in 2020 will be led by sophomore running back, Kavaughn Clark. The youngster is averaging 100 yards of offense per game and has been a spark plug for the ‘Yotes this season. Meanwhile, senior, DJ Gleash continues to dominate on defense, racking up ten sacks while leading the team in solo tackles and total tackles.

Gleash will be licking his chops eyeing a youthful Liberty backfield and offensive line en route to attacking the Lion’s senior quarterback, Brock Mast. The Liberty offense has been tricky, though, with two sophomore running back stars, Zaccheus Cooper and Zach Wallace, combining for ten rush TDs and nearly 800 rush yards. Cooper has also evolved into a dual offensive threat, accumulating nearly 400 receiving yards this season as well. While the Lions play defense by committee, watch out for senior, Koltan Cortez, who has emerged as a key defensive player in 2020, leading the team in sacks and tackles.

The most meaningful game between these two schools was the 2014 DII State Championship, won by Centennial. Now, this game could even be a precursor, not just to who makes which tournament but also a preview of a potential Open 8 game this postseason. Somehow, someway, these two always manage to meet on the biggest stage when it matters the most. You can watch this game here on Sports360AZ via the Peoria Student Broadcasting Network.

In two days, two top-five teams in Arizona will battle in a return of a PUSD rivalry.@Cehsfootball will visit @LibertyFBLions for the first time since the 2017 playoffs. If you can’t attend, you can watch LIVE & FREE on Liberty PSBN! #AZHSFB

Sunnyslope’s only game of note thus far was an 11-point victory against Desert Mountain, the 5th ranked school in the 5A Conference. ‘Slope remains undefeated on the season with an offense led by junior quarterback, Tanner Daoust. The offensive energizer has been fellow junior, Xander Georgoulis, averaging over 100 yards per game through productivity both rushing and receiving. Be on the lookout for seniors, Cade Hilker and David Sing, leading the defense into a stout Boulder Creek arsenal.

If it wasn’t for a one-point loss to Casteel to open the 2020 season, 6A’s Boulder Creek would be undefeated as well. The Jaguars, ranked 16th in the AIA’s Open Division rankings, could slide into the top eight with a victory over Sunnyslope, similar to how Chaparral earned their spot after defeating Liberty to conclude last season. Everyone already knows about the Jaguars’ senior showstoppers, Bear Milacek and Jacob Cisneros, averaging well over a combined 400 yards of offense per game, but be sure to give credit to players like junior, Carter Cameron, who leads the team in both tackles and tackles for loss.

Regardless of who wins this game, both teams could be kicked out of the Open 8 due to a committee voting on what teams make the tournament as opposed to the ranking system they are currently using to rank the teams. Regardless, both teams have a chance to end their seasons with big wins and a chance to make a statement before entering their postseasons.

I told you we’d be fine! @Jacob20Cisneros flying down the sideline and hauls in the dime from @AzQbBeAr6

Prior to selecting teams for the Open Division Playoffs, the 4A Conference will participate in a play-in round, the equivalent of a normal 4A first-round playoff game. For the second year in a row, the Cactus Cobras will be ranked in the top 4 in the conference. Their play-in game will welcome the Prescott Badgers to the West Valley in a one-game elimination round.

The Cobras have been on a roll. Following late-game heroics to claim a region title against Northwest Christian, CHS traveled to Bradshaw Mountain last week, claiming a dominant 54-17 victory to end the regular season with a 5-2 record. A high octane offense will once again be a priority. Prescott is only allowing 24 points per game this season but lost to Coconino 41-0 in Week 3. Cactus sophomore, Damian Jiles, has been a staple offensively, earning over 500 rush yards while fellow s’more, Will Galvan, has played well throwing the ball and carrying the ball, responsible for 13 total touchdowns passing, rushing, and even receiving.

Also, watch out for standout defender, Justin Holmes. The junior leads the team in tackles, tackles for loss, sacks, and has even added a pair of fumble causes and a blocked punt this season. After a heartbreaking loss last year to Mesquite in the semifinals, the Cobras are eyeing state title number three in program history. The Badgers are the first obstacle in their path.

For the first time in their 2A Conference, 11-man football career, the Glendale Prep Griffins are in the State Tournament. Their last tournament appearance came in 2014 as an 8-man football team, falling in the first round. 2020 has brought a 5-2 record for GPA and victories against teams like Arete Prep, Trivium Prep, and Kingman Academy.

Now, the Griffins face the Parker Broncs, a powerhouse team who beat Glendale Prep just two weeks ago by a dominating 62-12 score. Senior, Joseph Valenzuela, and freshman, Jason Cullum, made up the only two scores for GPA. Both Samuel Terpstra and Malachi Mizysak will look to help increase the Griffins’ defensive tempo after leading the team in tackles in their game against Parker to attempt to give the Broncs a run for their money.

Regardless of the outcome, it has been one of the greatest seasons in GPA’s program history, growing into the 2A Conference and creating a winning atmosphere. Even with the shortened season, this 2020 team scored the most wins in a single season for GPA in the 2A Conference and has even more room to grow in 2021.