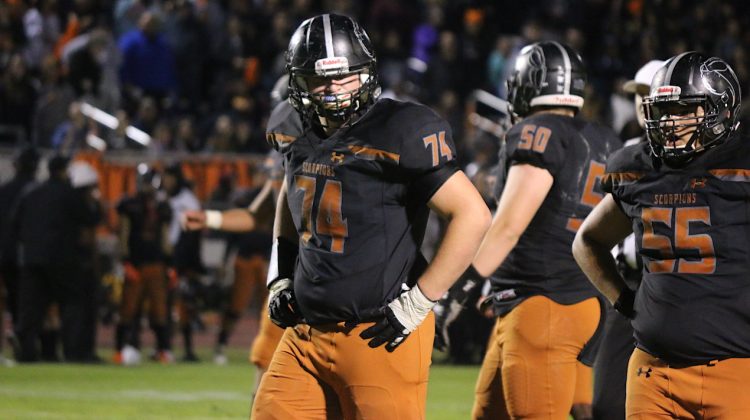 Halftime is over and the third quarter of the season is underway. Some teams on the west side are looking to make a case for great tournament spots as the tail end of the season draws closer.

Desert Edge is vying for their third undefeated regular season in program history. Their final two opponents of the season, Millennium and Verrado are a combined 2-3. Their opponent next on the schedule, though, will be looking for redemption. After Sunrise Mountain’s flawless record was blemished last Friday by sister school, Ironwood, SMHS is hungry to ruin someone else’s unbeaten 2020.

The Mustangs were scoreless in the final three quarters in their first loss of the season to Ironwood. Besides senior running back Julian Esber, Sunrise Mountain’s offensive production was lacking only compiling 171 total yards of offense. The Mustangs will have to lean on their defensive threats such as seniors, Owen Thomas and Bryce Cord, the team’s two leading tacklers. The duo are constant defensive threats, both in the secondary for Cord and on the line where Thomas has racked up seven sacks in 2020.

Desert Edge has been dominant, picking up yards left and right. A balanced offense has accumulated 219 receiving yards per game alongside 198 rushing yards per game. Junior sensation, Jeryll Mcintosh, has been the heartbeat of the offense totaling over 700 rush yards in 2020 and setting a tempo each and every game. The Scorpions aren’t just balanced when it comes to rushing and receiving, they’re also balanced offensively and defensively with senior, Myles Hobbs, setting that pace on defense with 50 total tackles heading into Week Six.

The Mustangs face a large task in front of them as Desert Edge continues their fight to prove that they are worthy of an Open Division bid.

Continuing to be unblockable this year @RJ_Roberts99 had himself a productive Friday night pic.twitter.com/gmrAPpTAH1

Speaking of teams proving something, Boulder Creek is proving they have built themselves into a 6A contender. The Jags are on a four-game winning streak, including games against Brophy Prep, Mountain Ridge, and Sandra Day O’Connor. They face another team trying to show their growth as the Shadow Ridge Stallions take the drive up to Anthem.

Shadow Ridge is on pace for one of their greatest seasons in program history. SRHS has only eclipsed six wins in a season two times and must defeat Boulder Creek just to have a chance of earning seven victories in 2020. They have won impressive games against Basha and Mountain Pointe through offensive weapons like senior, Zachary Sutton, who has totaled over 500 receiving yards this year, and running back, Jacob Therman, who has over 600 rushing yards. They will have to run on all cylinders to have a chance against Boulder Creek.

The BC Jags have looked dangerous. MaxPreps ranks the team 16th in the entire state, potentially proving that they are capable of earning a first-round home game this postseason. The Jags only divot this year is a one-point loss to Casteel. Besides that game, BCHS has been a force in 6A. Alongside QB, Bear Milacek, and running back, Jacob Cisneros, other key playmakers on defense like Carter Cameron and Dominic Wright, the team’s leading tacklers, have helped bring the team to their 4-1 record this season.

Just when you think you have @Jacob20Cisneros contained he starts throwing his stiff arm around ?

The Eagles will face off against Tempe Prep, a fellow 4-1 team who is ranked 8th in the conference. This year in the 1A Conference, there will only be eight teams in the tournament, with the top two teams in each region earning a bid to the postseason. Both teams are already locked into the tournament, beginning on Nov. 13, but this is an opportunity for AP to prove their strength.

Junior quarterback, Jake Crawford, has been sensational, throwing for over 1,000 yards, rushing for 552 more, and picking up 19 tackles and an INT on defense. The Anthem Prep defense faces Tempe Prep QB, Diego Foster, who leads 1A in passing yards. The Eagles will need defensive leaders like seniors, Ryan Osha with a team-leading 37 tackles and six sacks, and Ben Dixon, who has totaled three interceptions, to win their final game of the year.

The Sunnyslope Vikings are another team on the verge of greatness. SHS is 3-0 in their first half of the year with four home games to open the season. This Friday’s game against Desert Mountain will be their final home game of the year as they look to take down possibly their toughest opponent thus far.

Desert Mountain is 3-0 as well through the first half of their season. Both teams have taken down McClintock with similar scores. Sunnyslope will look to defensive players such as senior, Richard Kwete, who has picked up 2.5 sacks and a 15-yard fumble recovery to step up Friday night. Offensively, junior running back, Xander Georgoulis, has led the team in the ground game, nearly reaching 300 yards through three games.

Sunnyslope has a favorable schedule but ends the season against 6A star, Boulder Creek. They have plenty of learning to do before that regular-season finale and battling a team like Desert Mountain can guide this team to find the rhythm to close out their season.

ya might need to watch this one back a few times. ???