The first true Friday of the Arizona high playoffs brought plenty of interesting storylines and wild finishes, including a nail biter in the west Valley so let’s kick things off there.

Never underestimate the heart of a champion.

Centennial found that out first hand as the Lions (6-3) got revenge on last week’s home loss in the second half of the Peoria rivals back-to-back (please don’t do this again AIA).

This was a total coin flip game which could have gone either way but Liberty’s defense forced and recovered a late fumble from Centennial quarterback Joshua Gasca and then went into victory formation to seal the win as the Coyotes (6-3) burned all their second half timeouts before the drive.

It’s been well-documented the defending 6A State Champions not only lost over 40 seniors from last year’s roster but long-time head coach Mark Smith, as well.

Some even questioned if the three-loss Lions deserved to be in the Open Division Playoffs.

“People can say what they want, right?” Liberty head coach Colin Thomas noted to Sports360AZ.com moments after the game. “The schedule we play is a little different than some other people. We played Centennial, Chandler, Hamilton, Queen Creek.”

Give Thomas, Liberty’s offensive coordinator last season, a ton of credit for getting creative against a stingy defense which was forcing turnovers and plenty of negative or minimal plus plays.

The Lions caught the Centennial secondary napping on a deep Brock Mast to Jordan Guevara touchdown connection midway through the third quarter and then Thomas doubled down after pulling within a point with less than two minutes left. The first-year head coach ran a play mirroring the “Philly Special” as Mast caught the go-ahead and eventual game-winning pass on a throw from freshman (FRESHMAN!!) quarterback Navi Bruzon.

“We got in that spot and we played for the win and it worked,” Thomas said with a smile. “If it didn’t work out so well, it wouldn’t have been such a great call.”

This is the 2-point pass from freshman QB @navibruzon to senior QB @BrockMast10 that propelled the @LibertyFBLions to the Open semifinals after downing @Cehsfootball 25-24. What a play with everything on the line. #WestValleyPreps pic.twitter.com/Vd9mp41XP6

Definitely one for the ages.

“I didn’t even get the call to be honest,” Mast said afterwards of the two-point play which was practiced and installed just last week according to Thomas. “[Centennial] was actually calling out, ‘Trick play! Trick Play!’ so I was like, ‘Oh, [expletive].’ Once I snapped it there was nobody over there and I just caught the ball.”

Next up for Liberty is Chandler who came away with a 44-10 win when the two teams met in Week One.

Three scores which caught my attention from the opening round of playoff action.

I can’t always figure out the 4-2 Firebirds but when they’re good, they’re really good and Friday was certainly one of those nights for the seven-seed who proved to be unwelcome guests for the second-seeded Bulldogs. Chap has ballers on both sides of the ball and are one of the hottest teams around after a late-season loss at Centennial.

The Bird Cage and Chap Town next travel to Sandra Day O’Connor next week in the semi-finals.

Well, here we go again for George Prelock’s Saints. NDP (5-2) knows how to get deep into the postseason and if they were “flying under the radar” as a seven-seed, they aren’t anymore.

They’ll face Ironwood, who upset Desert Mountain, next in the west Valley.

Hat trick for Rodney Clemente as he takes this one 48 yards up the middle for the score.

The Huskies bounced back and in a BIG way, despite not having junior starting quarterback Nicco Marciol who suffered a shoulder injury last week against Chandler.

According to Zach Alvira, Hamilton’s running back tandem of Rodney Clemente and Noah Schmidt rushed for a combined 326 yards and seven touchdowns against the Aztecs who mustered little offense against Mike Zdebski’s defense.

It was unquestionably a great season for Corona (8-1) but I felt all along battle-tested Highland was more deserving and this is the exact reason why. 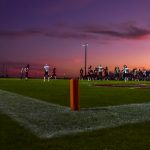 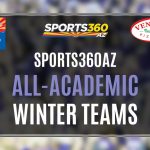 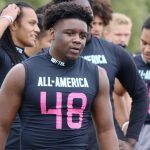