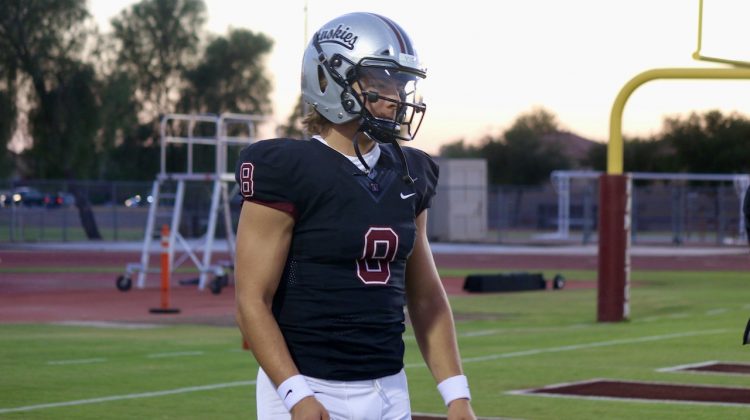 Let’s start with Hamilton quarterback Nicco Marchiol being just a junior. I think there’s some in the high school community who just assume by his physical stature, that he’s in his final year of high school. No, he’s not.

Jeremy Kitamura is the quarterback coach for the Huskies, and he knows his signal-callers physical attributes are impressive.

“So Nicco was telling me last week, ‘Coach, teach me how to slide, I need to learn how to slide,’ and I’m laughing saying, ‘Nicco, your bigger than most everybody else, you’re built like a guard,'” Kitamura said.

Friday night, Marchiol will be on the national stage with the rest of his teammates when the Huskies play at Saguaro. ESPN will broadcast the game, and Nicco, who holds double-digit college offers from across the country, will be on display.

“He’s really a coachable kid,” Kitamura told me by phone on Wednesday morning. “His mental strength is what has impressed me most. He came in as a tremendous raw talent, and now he’s making and extending plays. He knows how to read defenses, he’s special.”

Kitamura knows a thing or two about Hamilton quarterbacks. He worked with Nick Arvay, who threw for over 2,400 yards a season ago. Kitamura also coached University of Oregon starting quarterback Tyler Shough, who led the Huskies during the 2017 hazing scandal.

“Tyler’s recruiting didn’t really take off until after his junior season,” Kitamura said, “while Nicco has come in already with a ton of offers. Friday will be a great experience for him.”