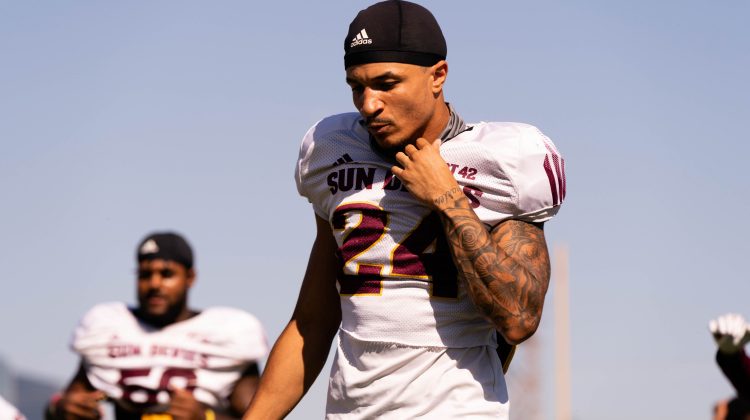 Between both coaches NFL backgrounds, the Sun Devil defensive unit will look to ascend to new heights. The defense returns all of its starters from last season and is led by the linebacker core of Merlin Robertson and Darien Butler, along with the secondary of safety Aashari Crosswell, and defensive backs Jack Jones and Chase Lucas.

The newest feature of this year’s defensive unit will be the new structure, as ASU is moving to a more traditional 4-3 defense rather than their 3-3-5 system that was ran in previous seasons under former defensive coordinator and current University of New Mexico head coach Danny Gonzales. With upperclassmen and returners now guiding the group, the transition has come along relatively smooth, as players are holding each other accountable.

“I think with Zoom and a lot of the virtual meetings that we had, I think the game has slown down a lot for the guys mentally,” said Pierce of players adjusting to the new defense. “Obviously, they have to get up to speed physically and with pads on, but it’s just the mental errors. You see that they understand right away when there’s a problem or issue, or something that’s a bust. Right away, you kind of know exactly what’s going on and who needs to fix it, and where it was at. I think that’s the biggest thing. The players are taking ownership of the team and that they understand the standard that we want to play here.”

Last year, ASU’s defense gave up 22.4 points per game (fifth in the conference) and forced the most turnovers in the Pac-12 with 28. The defense looks to build upon that foundation, and many of the players think there’s a reason to be optimistic about what lies ahead.

Another key returning player to the group is defensive end Tyler Johnson, who had plans on retiring after last year’s Sun Bowl victory over Florida State, only to return just prior to this season after being convinced by coaches and teammates to give this year one more shot.

Johnson had 38 tackles two seasons ago, and after dealing with injuries last year, he’s looking for a fresh start. He’s converting from outside linebacker to defensive end in ASU’s new scheme.

“Changing the defense to a 4-3 and having my hand in the ground all the time and being able to work consistently at pass-rushing, it’s a good fit for me,” Johnson said. “It’s a good thing that we’re doing right now.”

Johnson’s decision to come back also resurfaced during spring football, and after many discussions with colleagues and coaches, he made his decision to opt back in. Prior to his decision to return, Johnson was even working a 9-5 job, getting ready to take on the working world before finding his bath back to the game.

“It’s kind of crazy how over time, things change drastically,” Johnson said. “I’m very grateful that coach Herm allowed me to come back and finish what I started. I graduate this semester and if I can finish out football and school on a good note, it’d be good.”

Along with the rest of the returning group, Johnson looks to bolster the Sun Devil defensive regiment. A year ago, ASU had nearly its entire defense playing as freshmen. Now the group is older, more poised, and ready to hit the ground running.