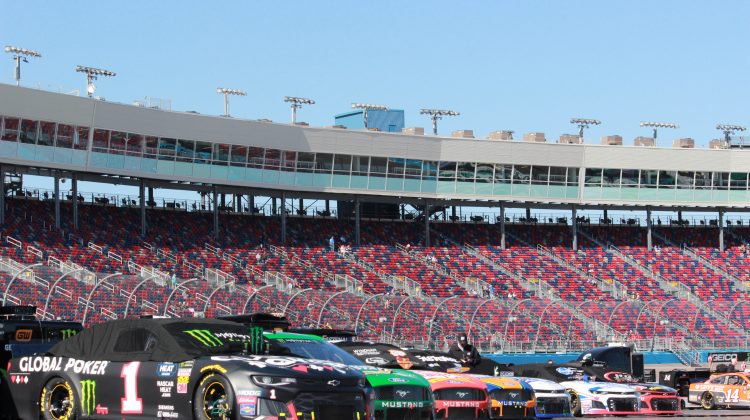 The NASCAR Cup Series will crown a champion for the first time at Phoenix Raceway on November 8. Four drivers will enter the race with an equal chance to win the title, whichever of the four finish the best will win the title. Here are the eight drivers still eligible to be one of the four championship drivers and a little more about them outside of the race car.

No one has had a journey like Kurt Busch. He won his first championship at age 25. Just one year later while in Phoenix, Busch was detained on suspicion of drunk driving and was released from his championship team. Busch was known for anger problems and a nasty attitude and was terminated from another contract at the end of 2011. Busch went to anger management classes and began a process of changing his life around. He had to restart his career, running for small low-budget teams and running in the back. He rebuilt his career and rebuilt his life.

Now happily married and in one of his best seasons since his 2004 title, Busch has an opportunity to race for a championship again, 16 years after his first and only title. Busch often teams up with Veterans Ticket Foundation and in 2019 gave away 3,600 tickets to NASCAR Cup Series races for U.S. veterans. The 42-year-old is a huge Chicago Cubs fan and loves to fish as well as cheer on his wife, Ashley, playing polo.

2 | Brad Keselowski – Love Him or Hate Him

Brad Keselowski talks the talk and walks the walk. He hasn’t made many friends on the track but his aggressive driving style and success has earned him a plethora of fans.

Even with his 2012 Cup Series Championship (and tipsy post-race interview), arguably his most famous moment in NASCAR is at the driver intro’s at Bristol in 2010 proclaiming over the microphone, “Kyle Busch is an a**.” Keselowski’s personal foundation, the Brad Keselowski Foundation, supports organizations and individuals in order to help veterans and first responders during their road to recovery. He celebrates every victory by doing his burnouts with a large American flag hooked onto the car.

“I want this car for Phoenix.”

If Brad @Keselowski makes the championship race, he’d like to race the car he won with tonight at @RichmondRaceway, and earlier this year at @NHMS. #NASCARPlayoffs pic.twitter.com/uvg78mNviw

Kevin Harvick has been dominant in 2020. The 4 team brings the car to beat nearly every week, winning nine of the 33 races. He will certainly be the favorite if he makes it to the Championship 4 at Phoenix, he owns the most all-time wins, finding victory lane nine times at the track since 2006.

Kevin Harvick has become most famous for his two children, Keelan and Piper, and their post-race actions including riding shotgun inside the car back to victory lane and their celebrations in victory lane. The Kevin Harvick Foundation helps underprivileged youth find and realize their dreams and built a Youth Development Park in Greensboro, NC. Harvick enjoys golfing, sporting events and is a fan of Arizona’s own country music star, Dierks Bentley.

.@KevinHarvick does burnouts with Keelan in the car.

If that isn’t the most badass father-son moment ever, we don’t know what is. #KidsDriveNASCAR pic.twitter.com/Hk2Nt9nUTt

At just age 24, Elliott is already the defending back-to-back Most Popular Driver Award Winner and won the 2020 NASCAR All-Star Race. Just like when his father, Bill Elliott, raced in NASCAR, every time an Elliott wins, the Dawsonville Pool Room from his hometown rings a siren outside to signify the hometown kid’s victory.

RETWEET TO CONGRATULATE CHASE ELLIOTT ON HIS POLE IN PHOENIX! pic.twitter.com/WVXhvrm9uQ

Denny Hamlin has all but secured a seat in the Hall of Fame. He has climbed into the top 20 all-time in Cup Series wins, he has won the Daytona 500 three times in his career and has done it all with just one team. The only thing he is missing is a championship, entering his name in the conversation of best to never win the title, coming so close on four different occasions. With seven wins this year, Hamlin is a favorite to finally earn the NASCAR Cup Series Championship.

A courtside season ticket holder of the Charlotte Hornets for many years, Hamlin will partner with Michael Jordan in NASCAR next year creating a new team with Bubba Wallace as the driver. Hamlin has raised over $2 million in funding for Cystic Fibrosis research with the Denny Hamlin Foundation.

@dennyhamlin burnt down the house winning the #Bluegreen500 taking his second career win at @phoenixraceway and locking himself into the #Champ4. Vote for Denny above ☝️ pic.twitter.com/v53wpCkhQc

We all have battles to overcome. Truex didn’t bring money or fame to the sport so he worked his way up the ranks from the very bottom. He finally made it to a top team but lost his ride when sponsors pulled away from his team after a cheating scandal from his teammate and team owners. He went back down the ladder to a low budget team and they fought their way to the top, becoming the only single-car team and a small team to win a Cup title in decades.

Personally, he fought alongside longtime girlfriend, Sherry Pollex as she battled ovarian cancer for nearly half a decade. The Martin Truex Jr. Foundation has raised millions of dollars primarily focused on raising funds and awareness for childhood and ovarian cancer.

Martin Truex Jr. had a special day winning #NASCAR championship; his girlfriend, Sherry Pollex, made it extra special with her brave fight against cancer. https://t.co/yWnrZQGk8V pic.twitter.com/oFO2emXG0T

As Kyle Busch stated last month, “He’s nobody’s friend for a reason.” In his young career, he’s been punched in the face by Kyle Busch, told Kevin Harvick his wife wears the pants in the Harvick household and turned into an ultimate villain, wrecking some of the fan favorites in NASCAR. But he always backs up whatever smack talk he gives on and off-track by ending up in victory lane.

After helping rebuild in Joplin, MO following the devastating tornado of 2011, The Joey Logano Foundation was formed and has invested $4,000,000.00 in various organizations to offer first and second chances for children and young adults during difficult times in their lives. Logano also owns and operates, Clutch Studios in North Carolina that hosts production shoots and other commercial needs.

Retweet to congratulate Joey Logano on his win at Phoenix Raceway!@CocaColaRacing pic.twitter.com/HPbsSKOlER

Alex Bowman fought through the NASCAR ranks. He raced for small, low budget teams, racing at the back of the pack and starting and parking, hoping to earn an opportunity to race competitively in one of just 40 seats in the Cup Series. Bowman took a chance as a job as a sim driver for Hendrick Motorsports with no guarantee of racing on a track all year. After Dale Earnhardt Jr. suffered a concussion in 2016, Bowman took over and nearly won at Phoenix Raceway. When Earnhardt Jr. retired after 2017, Bowman was selected to succeed the most popular NASCAR driver in history. Now, Bowman will move to the legendary No. 48 for 2021 after seven-time champion, Jimmie Johnson, retires at season’s end.

Bowman attended Ironwood Ridge High School in Tucson. Bowman loves working on cars, including his personal cars, and race cars such as his midget cars for the annual Chili Bowl Nationals. You can usually find him with his best friends, Roscoe, a rescue Beagle mix, and Finn, a charcoal Labrador retriever.

Who are you rooting for to win a championship? Be sure to let us know at @Sports360AZ and @devonhenry77. Stay tuned for coverage of the 2020 NASCAR Championship Weekend at Phoenix Raceway right here on Sports360AZ.