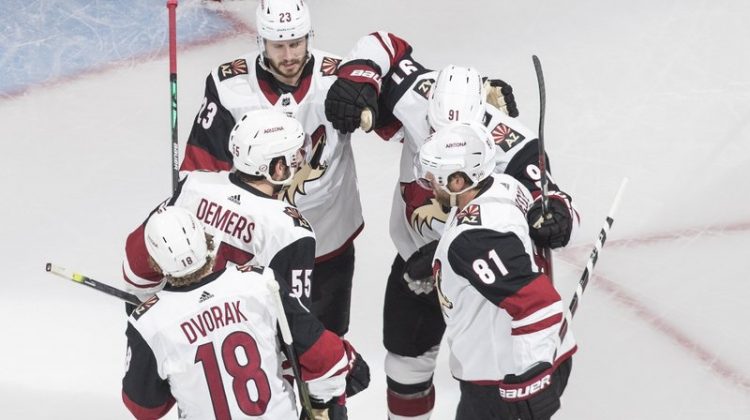 The NHL Draft (Oct. 6-7) and the beginning of NHL Free Agency (Oct. 9) is three weeks away. The Arizona Coyotes are still in search of a General Manager in the midst of a critical offseason.

The Coyotes have a mix of veterans with one year left on their contracts, as well as a young cast of players who have talent but are still searching for consistency at the NHL level. If anything was clear from the Coyotes postseason experience, it’s that the group is still far away from being a Stanley Cup contender. There are still talented pieces in place though, making this offseason an intriguing one while trying to find out which cards are going to be dealt.

The GM announcement is likely to come in the near future, even possibly this week. Interim General Manager Steve Sullivan took over the responsibilities earlier this summer, and he’s a candidate to fill the vacancy permanently. Craig Morgan of AZ Coyotes Insider also listed off St. Louis Blues Assistant General Manager Bill Armstrong and former Coyotes player, assistant coach, and director of prospect development Sean Burke in a recent story.

Burke is very familiar with the organization, working with the Coyotes in a variety of roles both in the front office and as a goaltending coach.

As for Armstrong, he’s aided in the drafts of Blues standouts such as goaltender Jordan Binnington, defenseman Colton Parayko, and forward Sammy Blais. All three players helped St. Louis take home a Stanley Cup last season. Thus, the GM search is in full swing, and there will be a lot of work ahead once the void is filled.

According to CapFriendly, the Coyotes projected cap hit given their current contracts is $80,383,902, and the NHL salary cap for 2020-21 is set flat at $81.5 million. Two other names not listed on this list were forwards Brad Richardson and Carl Soderberg. Both vets are unrestricted free agents this offseason.

Then of course, forward Taylor Hall also enters free agency, and forward Conor Garland will be searching for a pay day in the soon-to-be future. Garland led the Coyotes in goals (22) while being the lowest-paid player on the roster. He has one year left on his current deal before becoming a restricted free agent.

28-year-old defenseman Jordan Oesterle, who head coach Rick Tocchet alluded to as one of the best defenseman for the Coyotes in the postseason, also has one year left on his deal before becoming an unrestricted free agent.

As for the young core, forwards Christian Dvorak, Clayton Keller, Nick Schmaltz, as well as defenseman Jakob Chychrun are all signed to deals through at least 2024-25. They are the invested faces of the future, and a large part of the Coyotes success or failure over the next few years could come with those players production and development.

At the moment, the Coyotes do not have a 2020 first, second, or third round draft pick due to trades and a violation of the NHL’s scouting combine policy. Does the team shed many of its veteran contracts via trades or do they remain as is? It’s fun to put the imaginary GM cap on, but until the vacancy is filled, these questions will be lingering as the Coyotes try to remain on track during a shortened offseason.

First things first, however, and that’s finding the right person for the job just as owner Alex Meruelo and CEO Xavier Gutierrez are trying to navigate right now.