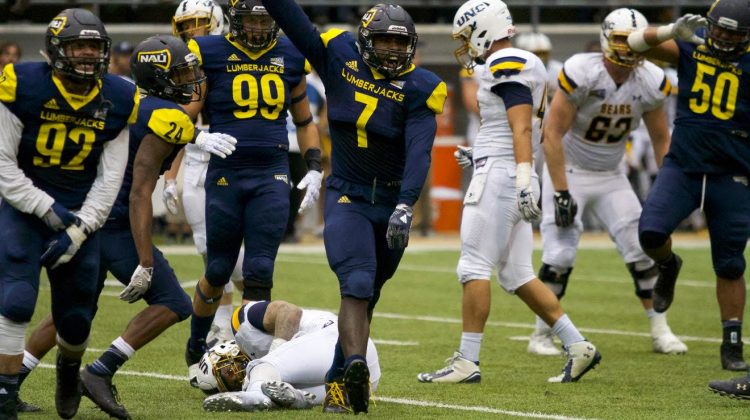 A Glendale native, Byron Evans II will be joining the Arizona Rattlers for the 2021 Indoor Football Season. Evans started playing the game when he was a little boy, and despite his new professional opportunity, his journey to where he is now wasn’t the easiest.

Evans didn’t start taking football seriously until his high school years. His dad, Byron Evans Sr., played college football at the University of Arizona and professionally for the Philadelphia Eagles for eight seasons.

Despite having a father that competed at such an elite level, Evans never felt that pressure. He just wanted to be the best Byron he could be. Evans initially started his high school career at Mountain Pointe, where he began to see his potential. He had to build himself up.

“You don’t want to get left behind by anybody and you realize how great you could actually be at it, so you kind of just put your nose to the ground a little bit,” Evans said. “I was on the B team my freshman year of high school, but I didn’t even think I was going to even make JV. Then some of the A team guys are teasing you around and stuff. Eventually they’re not starting, you are.”

Before making his move into college football, Evans transferred from Mountain Pointe to Phoenix Christian High School. During this time, Jason Jewell was the offensive line coach, as well as the recruiting coordinator at Glendale Community College, which is where he first met Byron. Jewell stated that Evans was one of the top of linebacker prospects on their board.

Evans spent two seasons at the junior college, where he made drastic changes on and off the field. He was in the Honors Program at GCC, and also won the National Football Foundation Scholar Athlete award for junior colleges in Arizona.

“What I’m most proud of Byron for was how he turned his academics around in the engineering college,” said Jewell, who is now the head coach at Brophy Prep. “Typically kids that are average students in high school, they’re still average students, even at junior college but Byron went from being a poor student to an honors student.”

Evans enjoyed this stop on his football journey, and grew as a person during that time.

“At Glendale I made some lifelong friends,” Evans recalled. “They always have a heavy football culture but when you’re in a junior college, nobody harks how serious it is as well. But Coach Bell, Coach Jewell, Coach Christian, they were all great guys, great coaches, and they helped me be the player I am today.”

After spending two seasons in Glendale, Evans went north to Northern Arizona University, where he improved even more. He played 20 games at NAU, where he had 119 total tackles, 6.5 tackles for a loss, a sack and an interception.

After his college career ended as a Lumberjack in 2019, he was still involved with football, just in a different way. Evans began helping his father, Byron Sr., coach at his alma mater at Phoenix South Mountain High, before things shut down due to the Coronavirus pandemic.

“It was fun,” Evans said. “It was a good bonding experience. I mean that was his dream. He went to South, he grew up on the south side. He gave back to South, he gave scholarships and all that. I liked to work with my dad like that because he’s a hilarious dude and has good experience.”

Figueroa began his college career with @CanesFootball, finishing at @ucobronchofb!

Evans has played every phase of his football career in AZ and he will now join the Snake Pit! pic.twitter.com/ACtvFb2H1e

Despite the success he was having on Saturdays in college football, Evans always knew that his ultimate goal was to make it to Sundays, and recently signing with the Rattlers is just one more way to get there.

Jewell recently caught up with Evans and is proud of how far he has come and is excited to watch him in the future. With various stops along the way, Evans is now a pro football player, looking to take another step in his journey and continue to leave his mark.

“I just look forward to winning games and making plays and getting some notoriety, that this kid can really play football on the big screens,” Evans said. “You got to stand out, whether that be the amount of tackles, interceptions, plays, all of that. You have to do something every game.”