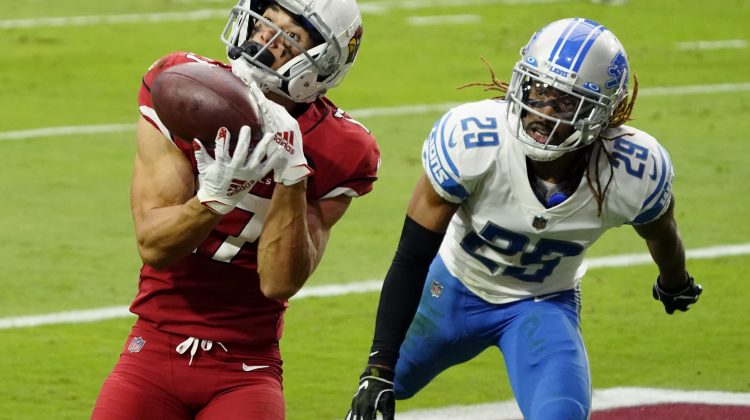 After catching nine balls as a rookie (including an incredible 88-yard touchdown against San Francisco), the 2019 second-round pick had a 54-yard reception last week against Washington and reeled in four receptions (on four targets) for 47 yards and two touchdowns in the Cardinals 26-23 loss to the Detroit Lions Sunday afternoon at State Farm Stadium.

Isabella got the Cards (2-1) on the board reeling in a nine-yard scoring strike from Murray late in the first quarter and then in third added a four-yard touchdown reception.

“My job is to win the route,” Isabella said after the game when asked to describe both touchdowns. “Kyler made great throws and we executed them really well.”

2nd of the day for @AndyIsabella5.

“He’s done a nice job all through training camp,” Kliff Kingsbury said in his post-game Zoom interview. “It was good to see him have success…we need to find ways to continue to get him the football.”

He picked up the receiving slack after Christian Kirk missed the game with a groin injury.

“There are a lot of good players in our room and a lot of players who can make plays.”

Isabella said he changed his approach, mentally, this summer which has benefited him early this fall.

“Changing my mindset,” he noted. “I worked so hard for this. One of the biggest things is controlling my mind.”

Their continued progression will be key as the season progresses.

Isabella says all the Cards’ receivers are game-breakers anytime they catch the ball.

“There are a lot of good players in our room and a lot of players who can make plays.”

Arizona is back on the road next week as they travel cross-country to take on the Carolina Panthers.