A rising high school senior member of the Arizona State Champion Brophy Swim Team was the first to swim an open water marathon at Santa Barbara Channel after COVID-19 restrictions were implemented.

Henry Palmer,17, says these times have inspired him to keep pushing forward and find new ways to challenge himself. He hopes to inspire others and remind people that this is not the time to give up, but to work harder.

“I just wanted to find a new way to challenge myself outside the pool, and do something kids my age have never done before,” said Palmer. “Really just try to inspire people and prove to myself that we do not have limitations specially during COVID-19, this is the time to slow down and not give up, it’s a time to find new ways to excel,” said Palmer.

Palmer started off at Hollywood Beach in Oxnard, California with the goal to finish in Anacapa Island. What was believed to be a 12.2 mile course ended up to be 14.3 miles as Palmer faced an obstacle in the water and a strong current against him. Palmer began swimming at 2:30am, and reached the Anacapa shore 6.5 hours later.

Palmer swam with no wetsuit in 59 degree water, and covered himself in baby lotion. A technique the athlete likes to do in order to protect his skin from the harsh conditions.

“The first three hours were definitely the hardest experience of my life. I couldn’t see anything around me except some flashing lights. The water was 800 feet deep, I had no idea what was underneath me. I was completely vulnerable,” said Palmer. 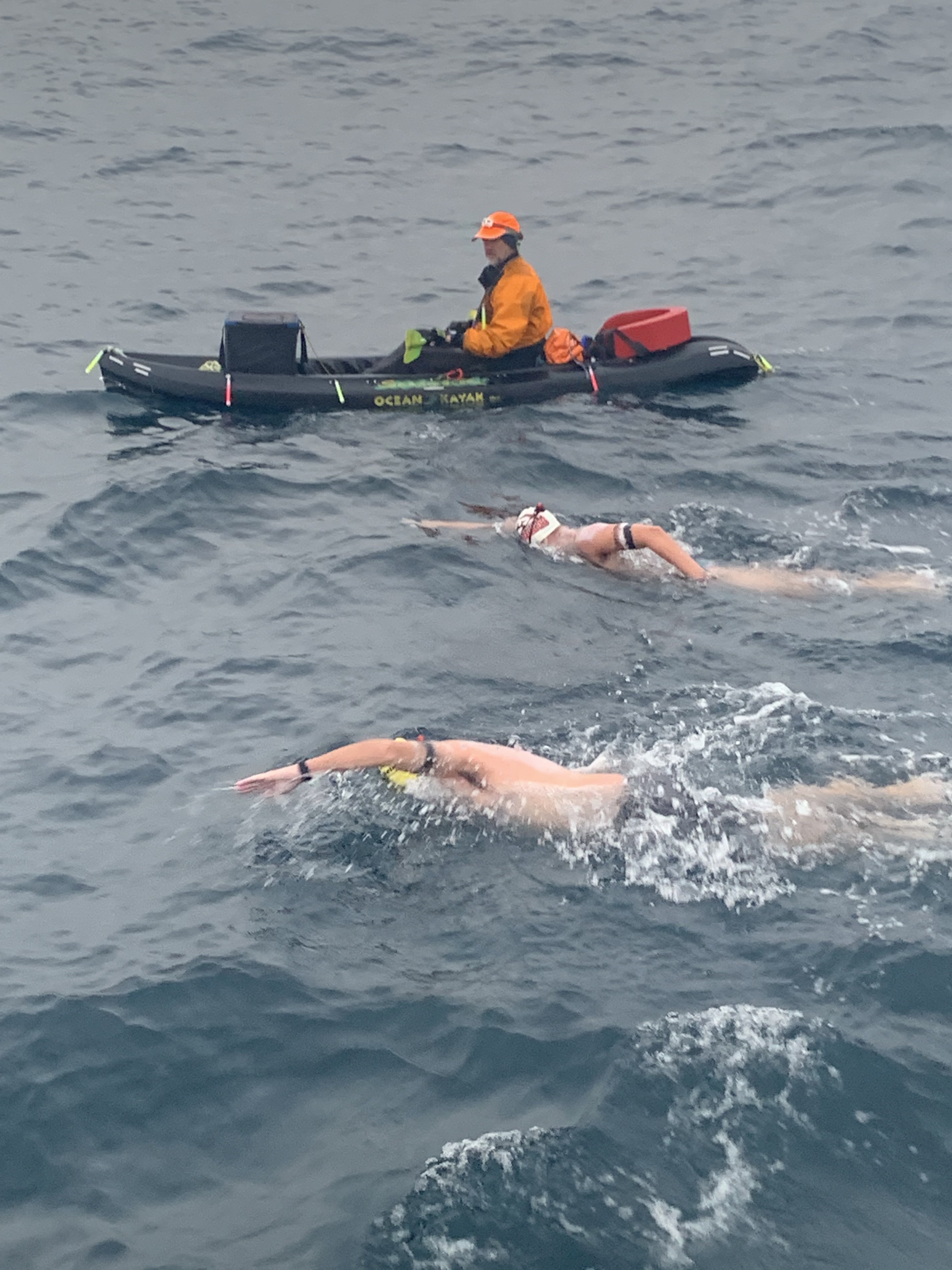 Palmer says the experience was like no other and his drive to keep going came from his goal to become the first young male to complete the California Triple Crown.

“Just the thrill of being vulnerable with nature is just a feeling that I cannot find anywhere else and the water was 59 degrees from the start, which is way colder than I have ever swam in. My teeth were chattering, I was shivering all over, my whole body was shaking, I thought I was going to get hypothermia,” said Palmer. “For the first hour I wanted to quit. I thought I could stop right there and no one would judge me, and then something just deep within me kept telling me ‘you got this, keep going, this is what you signed up for and you can do this.’”

Palmer previously swam the New York Open Water Bridges around the island of Manhattan last summer in August. A 28.3 mile course that was completed in 7 hours, 56 minutes.

He is currently training in San Diego for his next goal, to complete Lake Tahoe and be one step closer to his dream of becoming the first young male swimmer to complete the Triple Crown.

“On July 27th’s night I will be attempting to swim across Lake Tahoe, which is around a 21 mile swim. The water will be a little warmer since it’s a freshwater lake. It’s at 6000 ft of elevation, it’s a freshwater lake which means your body isn’t as buoyant so it takes a lot more effort to keep your stroke afloat. This is expected to take 10-12 hours, that will be I think the longest marathon swim I will ever do.”

Long time friend and mentor Joe Zemaitis accompanied Palmer on this journey, and is said to be there again swimming by Palmer’s side when he attempts to swim Lake Tahoe.

Palmer also disclosed that Joe not only was his coach but was also the one who introduced him to the world of marathon swimming when he was having a rough season of competitive swimming.

“I just fell in love with it and had such a great time, ever since then I have just been enjoying the sport and looking for more swims. He really jumped started my career in marathon swimming. I owe it all to him,” said Palmer.

Palmer says this is only the beginning as he has hopes of starting his own open water club in college and organize a team where people could practice marathon swimming.

“It really isn’t on the college scale yet and I think it would be cool to find other kids that have a swimming background and would like to branch out into marathon swimming,” said Palmer.

Remy Martin in the portal seems to have ASU folks in a bunch. Will discuss in the opening segment at 10:06.
https://t.co/afPGy8Iwjp
View on Twitter
0
1

@JordyHamm @Sports360AZ Jordan, don’t worry about it. I can totally handle this but thanks for offering. 😂
View on Twitter
0
1