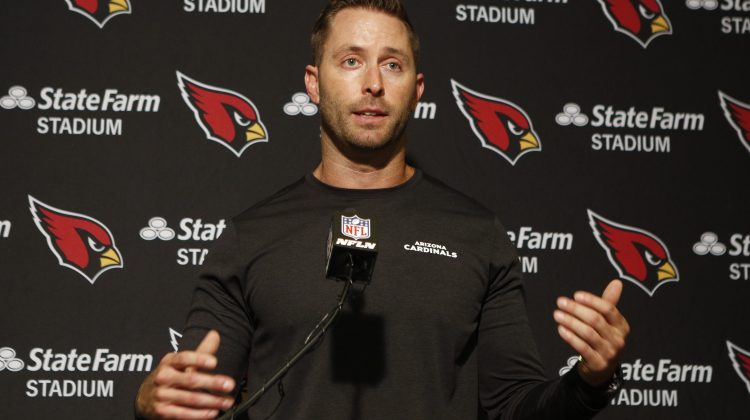 The Cardinals head coach Kliff Kingsbury addressed the media today ahead of NFL training camps gearing up. Training Camps this year look a little different due to the corona virus pandemic. The first part of training camps is getting tested for COVID-19, and that starts today.

“Excited to be back in the facility, we have had the rookies around the coaches around its been a great energy. The players are reporting today for the first round of testing.” admitted Kingsbury.

As the league gets closer to playing day, we are seeing more and more players opt out of the season. Per USA Today and their player opt-out tracker, there have been more than a handful of NFL players that have decided to sit out this season due to COVID-19. Kingsbury has yet to have had that discussion with any of his players,

“I haven’t had a discussion with a player who has brought that up yet … this is uncharted territory as we found with scheduling and other things …  As an organization right now, It’s fluid it’s day-to-day, but I have not had a conversation of that nature yet.”

The NFL is able to watch and learn from Major League Baseball right now, from how they handled the contract process, to testing, to an outbreak. As we are seeing from MLB right now and the Miami Marlins corona outbreak, having depth is very important. So one critical thought is to have the same positions separated. That would mean keeping QBs Kyler Murray and Brett Hundley separated in case one comes down with the virus, and the other can step in. Depth, considering the depth at each spot, is a key for trying to deal and move with the pandemic and something Coach Kingsbury admitted they have talked about,

“We have had those discussions I think in multiple positions. What is the best way to handle that? What does that look like exactly?  That is something that will be ongoing. There are some positives to that and trying to handle this season with what is going on.”

The season is going to be different in so many ways. One way already is that there will be no preseason games, but luckily for Coach K this mimics a college like season for him,

“It lines up very similarity to how we had it in college. Being a year removed from that, how we built up with no preseason games. You just know what you got and not what anybody else has. So there will definitely be some anxiety heading into that first week. It’s going to be new for everyone. We will do the best we can to maximize those padded practices … I think practice scheduling is going to be key. “

Not only does Training Camp look different, but the last few months as a whole have been challenging and looked at through a different lens. That lens has been through Zoom meeting after Zoom meeting and Kingsbury is no different in what he has been missing with using  Zoom.

“I think presentation-wise, you’re able to get your points across as well as you would in person. What I miss is the interaction …You’ll tell a joke you think is really funny, and it’s just dead silence. It falls flat for you. I think just seeing people’s facial expressions … that’s definitely lost through zoom.”

Well, soon Kliff Kingsbury will be back to telling jokes to players in person. Maybe not a jam-packed room due to personal space and room restrictions, but at least a chuckle or two in-person should do the trick.