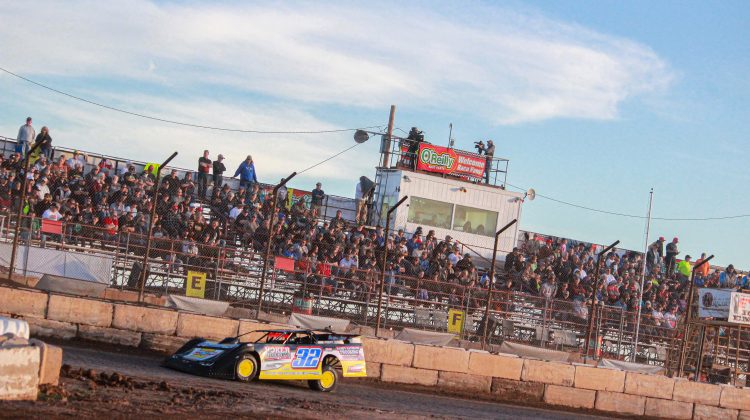 Arizona Gov. Doug Ducey announced on May 12 that sports could resume after COVID-19 shutdowns beginning May 15. Only a week later, local grassroots race tracks look to reopen to their doors to drivers only or limited capacity. Like many local businesses, there is a chance that some tracks do not return from the two-month shutdown and will close down for good.

When Jonah Trussel picked up the phone, he was putting his equipment to work. While he would love to be working on one of the two race tracks he promotes, instead he was leveling a dirt lot. With or without COVID-19 changing the world, the bills still had to be paid on the machines he purchased to run Queen Creek’s Arizona Speedway, the track he owns and operates year long.

Trussel also became the General Manager and Promoter of USA Raceway, located in Tucson, a few years back, attempting to grow the track which has faced uncertain futures for the past two decades. The tracks’ 2020 seasons were heading into the biggest races of the year when COVID-19 halted racing.

“We quickly started realizing what we could live without,” Trussel said.“You have to figure out what you can save and what you can’t and some of us probably just won’t be here when this is done. It will negatively affect dirt tracks but we’re such a small piece of the economy, it will be interesting what stipulations will be put on eventing in general.”

Three of the biggest weekends of the year were wiped out, including the nationally renowned World of Outlaws Sprint Car Series that is always reduced to standing room only at both tracks. Now, the Outlaws have no plans to visit the state.

Arizona Speedway plans to resume racing on May 23 and 24 at 25% capacity of fans and limited crew members for the John Morris Classic. Social distancing guidelines will be in effect, but Trussel is unsure how often he plans to race while social distancing is in effect. He still keeps the fans’ interest in mind, knowing that racing is a spectator sport to enjoy and interact with one another.

“I’m not real sure how social distancing works for a race track when they come with their buddies and sit in the grandstands but have to sit apart from them. That don’t sound like much fun to me,” Trussel said. “Is it going to be good for racing? No. With all that said, I also don’t want to get anybody sick.

“I don’t want to open before it’s time to open. I’ve hustled my whole life, if I have to figure out how to pay all the bills off of a different company and next year’s a better time to reopen and we can all get back to working and stay working, I’m an advocate for that. I’m not an advocate of working for three weeks and being shut down for another two months.”

Trussel and his crew are dedicated to abiding by any stipulations to get drivers and fans back to enjoying a sense of normalcy at the track and keep the half-mile dirt oval alive, one of the few remaining in Arizona. Meanwhile, the future of USA Raceway in Tucson is still uncertain as Arizona Speedway looks to make it’s return to racing.

“We’ll still be there. Arizona Speedway will make it out of this thing. That’s my baby and that’s what I’m most focused on. If I lose everything else I will still have my race track.”

The 55,000 residents of Lake Havasu know the family-owned track of Havasu 95 Speedway well. The quarter-mile paved oval is a favorite for those in Eastern California, Southern Nevada, and the Northwest corner of Arizona. One of only three paved ovals in the state, the Havasu 95 Speedway season was coming to it’s April championship races when COVID-19 struck and canceled the 2019-2020 championship hunts.

“I feel bad for race tracks that are just starting up, it’s an absolute financial disaster for everyone,” Head of Marketing and Operations, Bobby Keirns said. “We still got bills to pay, the electric bill still comes in, I’ve got tire inventory and a fuel inventory sitting at the track and I can’t do anything with any of it. It’s tough on everybody.”

The staff at Havasu 95 is made up of Keirns, his mother and father-in-law, his wife, and a group of volunteers. The team continues to communicate with drivers and fans but their primary concern is touching base with their many local family-owned sponsors, struggling during the pandemic.

“I worry about a lot of our small sponsors, our mom and pop shops. A lot of businesses in Havasu are mom and pop and family-run, and this whole situation is hitting everyone in the pocketbook very hard.”

Havasu 95 and the city are a tight community of racers and fans and the Havasu 95 family knows working together with the local community is what racing is all about. With that said, everyone would love to see the asphalt of Havasu 95 with rubber on it once again.

Plans have already been put in place to open the 2020-2021 season in September but until then, the family sits during the blistering Arizona summer and continues their offseason plans.

“We can’t do a whole lot about what’s going on, we just have to ride the wave and hopefully we can get back to racing soon.”

After seven months of lying dormant, the short dual dirt track of AKA Speedway in Glendale was purchased and renamed to Adobe Mountain Speedway. The purchasing crew first stepped foot on the property on July 23rd of 2019, beginning the process of refurbishing and preparing the track for the 2020 season.

“We had a full race schedule starting in January all the way through Memorial day weekend. We got three races in and then got shut down.”

Adobe Mountain Speedway Managing Partner, Ted Williams, spent months getting the track ready to begin a new era of local racing in Phoenix. While COVID-19 has taken a toll on the newly owned track trying to get its feet off the ground, the team took the two months of no racing to take care of installing a transponder system, improving the fences, and perfecting things they had to rush.

As a new track, losing months of primary income could be crippling but Williams knows the costs of owning a race track.

“I knew it wasn’t going to be a cheap venture on our part to do this, but it’s something I’ve wanted to do since I helped out at Manzanita Speedway quite a few years ago,” Williams said. “I always wanted my own race track. We’ve lost so many race tracks, I didn’t want to see any more go, so we jumped in feet first.”

Manzanita Speedway sat on 35th Avenue and Broadway Road in Phoenix. One of the most historic dirt tracks in the world living in the heart of Phoenix. Manzanita was sold and tore down in 2009, leading to a decline in dirt racing in the state.

Adobe Mountain is the only track that holds weekly racing within 34 miles of Downtown Phoenix. The track sits off the same road as Six Flags Hurricane Harbor, next door to karting track, PKRA, the training ground of Glendale-born NASCAR driver, Michael McDowell.

“I believe that kids are our future in racing and in almost anything. We’re trying hard to get that built back up the way it should be and that way it just evolves over time and the adults coming in and Arizona can be another focal point in racing in the United States.”

Adobe Mountain planned on becoming the first track to get back to action on Friday night without fans, to kick off three nights of racing over Memorial Day Weekend. Drivers from across the western United States flocked to the track, but the night was stunted by a power outage, putting an end to day one. The track plans to race without fans Saturday and Sunday night while streaming the event online.

Even with the struggles of COVID-19, Williams and company plan to expand the facility, adding tracks of multiple disciplines to give the Phoenix metro area a new home to hone their craft.

Salute to Indy event! Please see our website or Facebook event (link in bio) for more info as there will be strict procedures in place for this event.

No one knows how many tracks or small businesses will make it out of the COVID-19 pandemic or how the crisis will affect eventing moving forward. Racing is a small part of the local economy, but a strong community nation-wide. While tracks continue to resume their seasons safely, now is a vital time to support local businesses however you can to make sure what you love is still around in 2021.

“All of us race tracks, we’re big on promoting and staying together, working together,” said Keirns. “We’ve all got to help each other out to make sure Saturday night happens for everybody.”