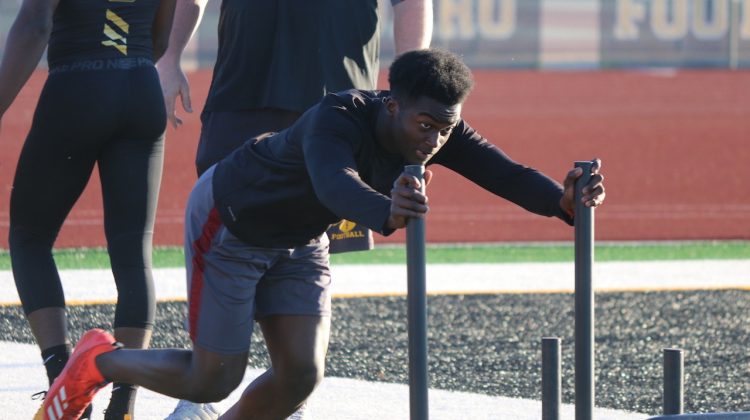 Class of 2021 Saguaro athlete Denzel Burke has been adding big program after big program to his offer list over the past few months.

The 6-foot, 180-pound recruit shared a list of schools he will be focusing on moving forward: Ohio State, Auburn, Texas, LSU, Nebraska, Oregon, USC, ASU, Colorado and Washington on Sunday.

This is the game I LOVE and without the Man upstairs none of this would be possible. Thank you to all the schools that recruited me and I am still 100% open to all schools but these are my focus as of now. #TopTen pic.twitter.com/4BkHR6DjWU

He gave his thoughts on each program to Sports360AZ:

The Buckeyes earned two commitments from Arizona in their last recruiting class: Jack Miller and Lathan Ransom. Burke was scheduled to go on-campus this spring, but that’s on hold during the corona virus outbreak.

“They offered me and have been keeping in touch every since and have been showing me love. They’re on me to come and visit. I had planned to be there April 2-4 that I had to cancel.”

Blessed to earn an offer from the University of Ohio State!!! pic.twitter.com/QiYJDdYZgF

The Tigers were the first to offer Burke over a year ago, and that still sticks in his mind. He’s kept in touch consistently with their offensive coaching staff.

“They reached out and said they loved me and we had plans to go out there April 11th and we had to cancel that because of the corona virus. I have a good relationship with (receivers caoch Kodi Burns) and (offensive coordinator Chad Morris) over there too.”

“They were the first one to show me love, so I have to show it back.”

Whether it’s Jake Smith, Brayden Liebrock and Bijan Robinson, Texas has been very effective getting guys from State 48 to come to Austin. According to Burke, it all starts with the man up top in the program.

“They have a great coaching staff over there, obviously. Everyone’s real. Coach Herman is a good guy. He’s always keeping in touch with me on a day-to-day basis.”

The Tigers were a huge offer for Burke last May. He’s grown up emulating former LSU defensive backs Patrick Peterson and Tyrann Mathieu and has admired their “DBU” attitude.

He and Quintin Somerville visited LSU last fall when the Tigers beat Florida.

“They’ve been my dream school, and I visited and it was nothing but love.”

The Huskers were another school in on Burke early and a campus he compares every visit to since he checked out Lincoln early on in his recruitment.

“That school was my first visit out of the gate…I will always remember they showed me love as soon as I walked through the door. I had a good conversation with (head coach Scott Frost) so that was really memorable.”

The Ducks added Burkes teammate in Jaylan Jeffers to their 2020 class, and the athlete has taken notice of what Oregon has down to get back atop the Pac-12 consistently.

“Oregon is what it has been. I went up there and the coaches are real. Loved it up there…with Coach Cristobal. It’s definitely an option.”

The Trojans have done a good job selling themselves to this current crop of Sabercats. Burke, defensive end Quintin Somerville and offensive lineman Bram Walden have all spoken highly of what USC can offer at the next level.

“I have a really good relationship with (defensive backs coach Donte Williams). I relate with him on a lot of levels. Their coaching staff over there is amazing. It’s a legendary school.”

The hometown school has shown over the past few years that the best players – no matter experience level – will play. Burke sees that as a potential opportunity to get on the field early in the Pac-12.

“If I go there, I have an opportunity to start my freshman year as a true freshman, and I’ll ball out…that’s a great opportunity for me.”

The Buffs have a new coaching staff in place, but a familiar face for Burke who could make Boulder look that much more appealing.

“(Defensive backs coach Demetrice Martin) just got the job as the cornerbacks coach over there, so I have a really good relationship with him ever since he was at Arizona.”

Former Sabercat Byron Murphy thrived under then-defensive backs coach Jimmy Lake. Now, Lake is leading the Husky program and is bringing in two members of the Saguaro secondary this class in Jacobe Covington and Danny Rivera as a walk-on.

All those familiar faces and the defensive back pedigree makes Washington very appealing to Burke.

“Just knowing that my friends are going to be there makes it even more comfortable for me to be there. It’s a great school, a great (defensive back) school. Washington has produced some great DBs to the league almost every year. There one of the top schools to send the most prospects into the draft.”

Blessed to earn an offer from the University of Washingtion!! #PurpleReign pic.twitter.com/XzahGPnVEk

As a junior, Burke appeared in seven games after sitting out five games due to transfer rules. In that time, he accumulated 12 receptions for 313 yards and four touchdowns. On defense, he intercepted two passes.

He said he plans to commit before the season starts and is still determining where he will take his official visits.

He’s looking to step up on offense and help man a secondary that will see Covington, Rivera and Georgia signee Kelee Ringo head off to Power 5 programs.

“I’m trying to be a leader, taking over as a senior and leading our guys to a championship this year and just be a role model for all the young cats.”