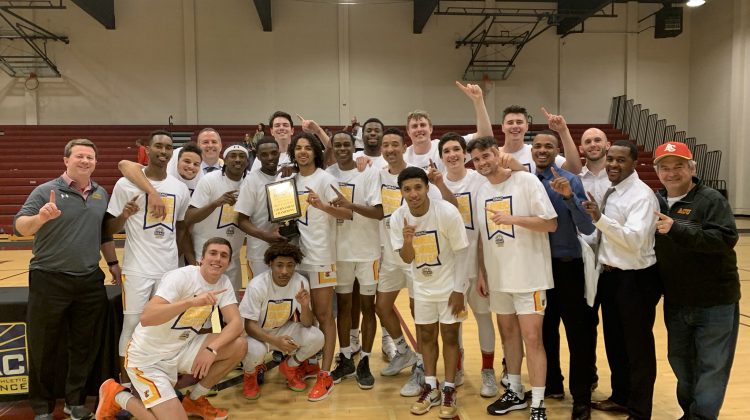 For the second straight year, Arizona Christian University was slated to make its mark on the NAIA. For the first time in program history, the Men’s Basketball team was victorious in one of the most brutal conferences in the NAIA, claiming the Golden State Athletic Conference Tournament Championship by just one point. Along with the victory came their 25th win of the 2019-2020 campaign, tying last year’s record-setting program win total.

“We were starting to really play well, our chemistry was fantastic,” Head Coach, Jeff Rutter said. “There were other teams that were limping along to the finish line and we were just starting to take off.”

The Firestorm’s season began injury-plagued. The team played without All-American Honorable Mentions, Shane Carney and De’Ron Kyle, for a multitude of games. ACU opened conference play with back-to-back losses setting them back to begin their GSAC season.

But the team showed its resilience and fought back with force, finishing the conference season at 12-6, including four wins of 26 points or more in the final month of the season.

“We felt going into this year we had a championship-caliber team,” Rutter said. “I thought we were better this year all-around.”

ACU entered the GSAC tournament with the fourth-best conference record and ranked 19th in the NAIA. The Firestorm made a statement in the semi-finals, defeating the tournament host, Westmont, a team that was 17-1 on their home floor and defeated ACU in both regular-season meetings.

The title game against Hope International University came down to the wire with ACU trailing by one point with five seconds remaining. Junior, Xander Bowers, caught a dime down-court from KeyVaughn Williams to knock down the game-winning layup not leaving HIU+ enough time to respond.

ACU had punched their ticket to the 32-team NAIA National Tournament for the sixth time in program history.

Blessed to be Champs! All praise to God! pic.twitter.com/Le4I33xDJU

After making it to the Elite Eight last season as a seven seed, ACU was set to return to the national tournament as the five seed in their bracket, slated to play fourth-seeded, Tougaloo College, on March 18.

While the new restrictions and guidelines put in place to prevent the spread of COVID-19 haven’t largely affected preparations for the 2020-2021 season, it has left a sour taste in the mouths of the Firestorm and changed what their spring semester could have been.

“I think because of what we felt like we could do [in the tournament], it makes it even worse,” Rutter said. “It’s been a challenge not getting to see our guys every day, not having open gym.

“We haven’t had our end of the year banquet. That would be a great place to have some closure on the season and reflect on all the great things and friendships and accomplishments we’ve had this year.”

The 2019-2020 Firestorm team can still hang their hats on finishing with the highest win percentage in a single season for ACU and claiming the first GSAC Tournament title in program history.

This season was the team’s first trip to the Conference Championship game since Rutter’s first year with the program in 2012-2013, when they battled defending national champion, Concordia University. It was a statement game for the young Firestorm program, but ended in a heartbreaking one-point, double-overtime loss.

A major piece of that 2013 team was NAIA All-American, Talib Uqdah, who scored 42 points in the title game against Concordia. The former Westview High athlete later served as an assistant coach for both Ironwood High School and Arizona Christian, bonding with many athletes at ACU.

Rest In Peace, Talib Uqdah. Forever in our hearts. pic.twitter.com/oSlSYTncpu

In January of 2019, Uqdah passed away, not able to watch ACU’s historic run to the NAIA Tournament quarterfinals, or the team finally returning the conference championship to finish what Uqdah’s team had started.

“14 months after he had passed away, us getting back {to the GSAC Championship] and winning, that was special to some of our guys that were here last year and knew him and really loved him.”

In the end, the Firestorm’s season concluded with one of the biggest accomplishments in program history and will likely go down as the best team ACU Men’s Basketball has had seen so far.

“We were one of the few that ended their season on a win cutting down nets. When the pain of the abrupt ending wears off, that will be something we can all be very proud of.”

My ⁦@ACUMBB⁩ team went all the way to the ⁦@gsacathletics⁩ championship game and all I got was this amazing T-shirt … and a piece of net they let me cut down! Congratulations ⁦@coachrutteracu⁩ and ⁦@ACUFirestorm⁩! Great comeback win. On to Kansas City! pic.twitter.com/q6haAAnOgC