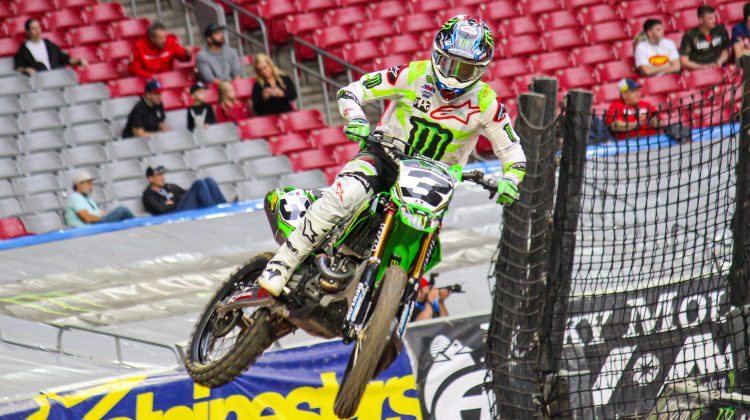 The sound of 450cc and 250cc four-strokes invades State Farm Stadium under an open roof on Saturday as Monster Energy AMA Supercross drops the gate on Round Four of their championship series.

This year, Supercross brings a new twist never before seen in the desert to excite the audience in 2020.

Glendale marks the first race of the Triple Crown, a championship series within the Supercross championship. This racing format takes away preliminary races like heat races and simply places the 22 best riders in each class duking it out head to head in three A-Feature events in a row. The rider with the best overall points finish in those combined races wins the event.

The Triple Crown format debuted in 2018, taking a page from Monster Energy Cup’s exhibition format. This format will take place in both the 450cc and 250cc class, giving the fans six A-Main events as opposed to the usual two. This means there will be six wins in the stadium in a single night, more wins than the stadium saw in all of 2019. Defending 450SX champion, Cooper Webb won the Triple Crown Championship in 2019.

Check out the @YamahaMotorUSA track map for round 4 of @MonsterEnergy Supercross in Glendale! ?

Another visit to Glendale also means another home race for Arizona native and resident, Chris Blose. After turning pro as a 16-year-old in 2006, the spunky veteran hits the track hoping to be one of the few non-factory riders to make the Triple Crown Glendale field.

“Honestly, it’s a love, hate relationship coming to Phoenix,” Blose said on The Inside Lane. “There’s so much pressure and everyone wants to see you do good, the 450 class if obviously so stacked. I just don’t want to disappoint anybody. I’m looking forward to it, but then again I love meeting all the fans and putting it on for my home crowd.”

Defending 450 Glendale winner, Blake Bagget, battled at the front of the field before going down early last week in Anaheim 2 and is still looking for his first podium finish of 2020. Germany’s Ken Roczen has turned up the revs in the last two weeks, finding the top of the podium in St. Louis, his first win in three years. Even after a sixth-place finish in the season opener, Roczen leads Justin Barcia, who claimed the season-opening Anaheim 1 win, by three points in the series.

Two-time defending outdoor champion, Eli Tomac is stalking Roczen and Barcia after standing at the top of the podium last week. In search of his illustrious first Supercross championship to put him in talks as one of the greatest ever, Tomac heads to Arizona looking to claim his fifth win in State 48 and the points lead.

“It’s the deepest field I’ve ever race in the 450 class, it’s gnarly,” Blose said. “It’s definitely the most depth that we’ve seen in a long, long time.”

Last year’s 250 victor, Adam Cianciarulo, has moved into the 450, jumping out to fifth in the points. In the 250 class, Justin Cooper leads the points after winning Anaheim 1 and scoring a runner-up spot in both St. Louis and Anaheim 2.

“It’s tough, a lot of the factory guys are going to be on it, you have to be on your ‘A-Game’ going into practice and the main events,” Blose said. “Everyone’s going to be sprinting, I feel like every Triple Crown race we do, there’s some chaos going on that hopefully, I can stay out of.”

Racing action starts at State Farm Stadium at 7:00 pm. The race will be live in the subscription-based NBC Sports Gold App and tape-delayed on NBCSN, airing on Sunday at 12:00 pm ET.