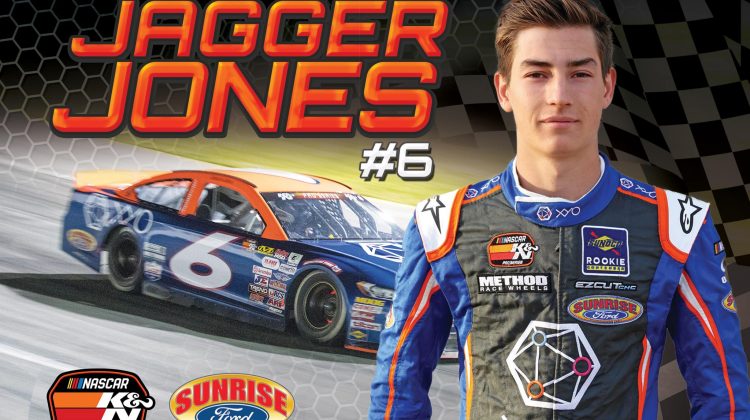 In 2006, the Notre Dame Prep football team broke through. After multiple sub-.500 seasons, coach Scot Bemis led his team to a 7-5 season to break the streak. In the following two seasons, NDP would win back-to-back 4A Division II State Championships. Following 13-1 seasons the past two years, the Saints football team looks for another chance at a state title.

It can be dangerous for the competition once high school athletes breakthrough and get a taste of victory.

The road to victory lane has many twists and turns as you’ve learned this year. I’m so happy for you bud!@jaggerjones98 https://t.co/TZ42LE6jW2

“That was my main goal this year. It gives us a ton of confidence especially with how many times we were so close to getting that win.”

Jones is a rookie in the K&N Pro Series West, NASCAR’s top development series, piloting the No. 6 Sunrise Ford Racing machine. He has already clinched ‘Rookie of the Year” honors for the 2019 season. The first-year driver currently sits second overall in the points standings entering the final race of the year at his home track, ISM Raceway.

Jones came home on Sunday after his win, preparing for the week ahead, changing gears from a NASCAR winner, to a high school senior. Even after joining a list filled with names like Bobby Allison, Ricky Rudd, and Kevin Harvick as K&N West winners, Jones was once again just a typical high school student traveling from class to class, although many of his friends recognized the accomplishment.

“A lot of the people at my school know what I do and follow. All my friends and all my school is a big supporter of my racing.”

Jones was born in North Carolina as his father, P.J. tried his hand at NASCAR. Jagger’s father, raced nearly everything on four wheels, including NASCAR, IndyCar, and sprint cars among other machines. P.J. was the winner of NASCAR’s first-ever truck race and claimed a win the 1993 24 Hours of Daytona.

In the mid-2000s, the Jones family moved to Arizona and settled in Scottsdale. Ever since then, living in the desert is all the teenager remembers.

“My fourth birthday was when we moved here. All I can remember; I’ve grown up here in Scottsdale.”

Jones grew up in the racing ranks throughout Arizona and California through go-karts, late models, and now in NASCAR’s regional stock car series, the K&N Pro Series West.

Its been a couple of busy weeks! Spent a few nights at Miracle League helping handicap kids play baseball. If you ever…

Early on at Notre Dame Prep, Jones aspired to go fast on his feet, joining the Saints’ track team. While uniforms were being handed out, Jones met a NASCAR fan in the making, the school’s equipment manager, Chris “Chico” Cochran.

“He’s real grounded,” Cochran said. “He separates both [school and racing]. When he leaves he has to lock in for racing, but here at school he seems to just be a regular kid.”

Cochran is an avid sports fan and former high school baseball coach at multiple levels. Just before meeting Jones, he found an interest in NASCAR and was intrigued to meet a student striving to break into the sport.

Jones can miss up to a week of school for racing and often is absent on Fridays to travel for the K&N Pro Series races. When out on the road, Jones separates from his schoolwork to prepare for racing. When he gets home on Sundays, he accesses his missed work online to catch up and be prepared to get back in the classroom as if he never missed a minute.

“It can be a challenge at times but I enjoy going to school,” Jones said. “I wouldn’t say it’s too tricky keeping up but obviously I do miss a lot of days, luckily in today’s day having all of our work online helps a lot because it’s easy to follow.”

Notre Dame Prep’s Director of Student Life and Admissions, Matt Rylski, has been able to watch Jones’ journey during the student’s time at NDP. While not a direct teacher for Jones, Rylski has watched from afar, helping Jones and fellow students along the way.

Succeeding in the classroom while traveling the nation and chasing a dream is a daunting challenge. A large part of how Jones succeeds is his accountability, preparation, and proactiveness when it comes to communication with his school educators and faculty while performing in his schoolwork.

Jones has maintained a rigorous school schedule, including honors classes his first year at NDP. His junior year, Jones missed over two dozen days of school traveling for races, yet still passed classes with flying colors.

Some of those missed days in 2018 included claiming a NASCAR late model track championship at Kern County Raceway Park in California. In June of last year, he was also given the opportunity to race a late model for Dale Earnhardt Jr. In his very first race in the JR Motorsports No. 88, he won at Myrtle Beach Speedway in South Carolina.

“The rigor of what we do [at Notre Dame Prep], a lot of kids, even if they don’t have major extracurricular, or in this case, professional aspirations, they struggle to keep up,” Rylski said. “The fact that he can balance it all and do it all; I don’t want to say effortlessly, but he makes it look easy. He makes it look like this is just what you’re supposed to do.”

At only age 17, it’s no surprise the youngster eats, sleeps, and breathes racing. Jagger’s father P.J., still races off-road vehicles. His uncle, Page, raced almost everything on dirt ovals until a near-fatal racing accident ended his career. His grandfather, Parnelli is a racing legend.

Parnelli Jones could win in anything he sat in the cockpit of. Parnelli was victorious in the 1963 Indianapolis 500 and won the Baja 1000 desert off-road race in 1971 and ’72. Mario Andretti even claimed Parnelli was “the greatest driver of his era.” While the 86-year-old living legend doesn’t travel much anymore from his residence in California, he still gets quite a kick out of watching his grandson make a name of his own.

“My grandpa’s come out to a ton of my races at Irwindale,” said Jones. “This year he’s watched probably all of my races live on Fan Choice.”

“He calls me and he’s on the phone and tells me to not let them push me around as you would expect from his day and age.”

Parnelli Jones, racing to victory ? in his Watson / Offy during the Indianapolis 500 in 1963.@IMS ? #Indianapolis500 pic.twitter.com/dyH221kzHN

For the first time in his racing career, Jones will showcase his talents in the Phoenix area at the state’s premier pavement track, ISM Raceway, where he will lock up his rookie of the year award. For his friends who haven’t seen Jones at work doing what he loves, they seem anxious to watch.

“Obviously there’s a social aspect missing there [homeschooling],” Rylski said. “Even away from the classroom and away from the track, just being a kid and hanging with your friends, and things like homecoming and going to football games, those are great experiences that I think are missed if you’re not in an environment like our own.”

Cochran looks forward to watching with a fresh perspective after traveling to watch Jones race earlier this year at Tucson Speedway. “I could tell I was so focused and so excited to watch him. When you watch someone you know, you’re really pulling for him and you’re so much more excited.”

He plans to visit ISM Raceway for the first time to watch one of his students compete on one of racing’s biggest stages.

Jones has never raced at ISM Raceway which last held a NASCAR Regional race in 2015. This is also the track’s first race outside of NASCAR’s national touring series since IndyCar visited nearly two years ago.

It will be easy for Jones’ classmates to cheer for him at the Phoenix racetrack. The K&N Pro Series West’s Arizona Lottery 100 is free of admission. Instead, the track is only asking for fans to donate non-perishable food items or new toys to support the Valley of the Sun United Way and those in need within the community.

The race is scheduled to start at 4:00 p.m. Arizona Time on Saturday, November 9, after the conclusion of the NASCAR Xfinity Series’ Desert Diamond West Valley Casino 200.

Jones is slated to graduate from Notre Dame Prep with his classmates on Thursday, May 13, 2020. While he strives to continue through NASCAR’s ranks, he also looks to continue his education and attend college.