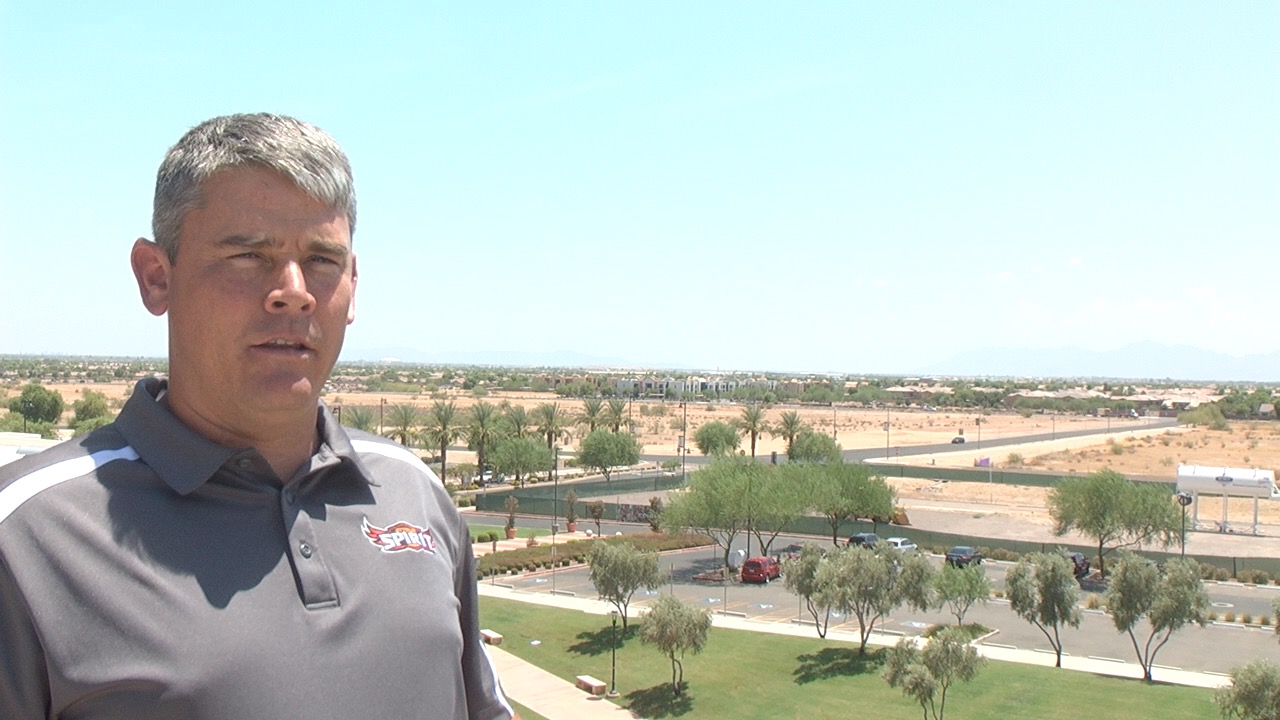 Mike Nesbitt stood on a dusty parking lot in Surprise three years ago, trying to envision football being played where he stood. The soon-to-be head football coach at Ottawa University of Arizona had trouble picturing college football occurring in this desolate space.

“No players, no equipment,” Nesbitt said. “We didn’t have anything when we started.”

Drive to that same location today, and you won’t find said parking lot. Instead, state-of-the-art facilities that host an NAIA football program.

Ottawa University of Arizona, which competes in the Sooner Athletic Conference for football, is ranked No. 19 in the latest NAIA Coaches Poll.

The university didn’t even exist in 2016. Two years later, the 800-student school fielded a football team for the first time. OUAZ is now just 14 months removed from its first game ever.

But time hasn’t stopped Ottawa from becoming a threat at the NAIA level.  “We lucked out,” head coach Mike Nesbitt said. “I was able to hire some really good assistant coaches in the first two seasons and we got some really good players.”

However, this rise to notoriety didn’t occur overnight.

Early in 2018, the Spirit struggled to find their footing. They started the season 2-3, which included a 56-34 loss to Southwestern Assemblies of God University.

That underwhelming performance lit a fuse.

“That was the game where we were just separated as a team, and after that, we realized if we separate, we’re not going to be successful,” running back Kris Ewens said. “As long as we come together, we’re going to be unstoppable.”

Since then, OUAZ is 13-2 and has lost just one regular-season contest. The first of those defeats came in the 2018 NCCAA Victory Bowl, when the Spirit fell 38-35 to Olivet Nazarene.

Following the loss, OUAZ had nine months to prep for the school’s second year of football. This long offseason set the Spirit up for a huge transition: moving from respectable to elite.

“It just came on in the offseason,” free safety Amare Burks said. “We found our identity, and we just took it and ran.”

The Spirit began 2019 unranked, receiving just nine votes, but have since eclipsed the top 15.

Much of this near-instant success can be attributed to the program’s dynamic offense. The Spirit are averaging 46.6 points per game, which is fourth in the nation. Redshirt-sophomore quarterback Austin McCullough is currently second in the NAIA in passing, producing well over 300 yards per contest.

McCullough also saw significant playing time a year ago, playing in nine games and logging 30 passing touchdowns. Getting these collegiate reps early on was crucial to the signal caller’s progression.

“I think I’ve developed a lot,” McCullough said. “I’m getting the ball to nine different guys every game now. That’s where I’ve progressed most as a quarterback, as well as being a vocal leader.”

In addition to McCullough’s productivity, Ewens has rushed for 693 yards and three touchdowns, averaging 7.2 yards per attempt.  This tandem has created a potent one-two punch for OUAZ’s offense.

Defensively, OUAZ is loaded with talented players who could eventually play on Sunday.

Of those, defensive back Jevan Hogan and defensive lineman Alema Collins have already been profiled by NFL Draft Diamonds as potential pro players. Collins even earned an invite to the Hula Bowl — a postseason invitational game in Hawaii for graduating seniors.

Regardless of whether Collins and Hogan hear their names called in the 2020 NFL Draft, they’re confident playing at OUAZ has prepared them for a career at the next level.

“The coaches here are phenomenal and help you build that mindset you will need to compete at the next level,” Hogan said. “Hopefully it can lead me in the right path.”

In Week 9, Ottawa played its most important game of the season, in terms of local recruiting: a road test against Arizona Christian. That game, the Spirit outshined ACU in every area.

OUAZ cruised to a 47-7 win over its cross-town foe, clinching its eighth win of the season. Ewens recognized that this game is crucial to winning recruiting battles and further developing the program. “I think that when we invite kids to watch games on the weekends, it’s just appealing to them,” Ewens said. “I think we’re steadily making this the destination NAIA [progam] in the country.”

For Hogan, Collins, Ewens and 25 other OUAZ players, Saturday, November 2 marked their last game at Spirit Field. Hoping to stay undefeated and leave one last mark on OUAZ’s home turf, the senior class’ goal for that game was simple.

But things didn’t go as planned.

The Spirit lost 18-14 to unranked Lyon College. Ottawa scored 14 points in the first quarter, pushing ahead to a quick, 14-3 lead. After that, the Spirit were held scoreless and struggled to sustain drives.

Following the loss, OUAZ sits at 8-1 with just one regular-season contest remaining.

With this devastating loss, it would be easy for Nesbitt’s squad to lose hope. OUAZ’s playoff chances look murkier. The long winning streak has been snapped. The offense looked stagnant for the first time all year.

But the Spirit are finding refuge in a power outside of football: faith.

OUAZ is part of the Ottawa University system, a Baptist institution based in east Kansas. For many of the players, their faith is in a higher power.  But even for those on the team who are not religious, they have faith in one another.

And the players believe their faith — whether in a higher power, each other or both — will help them recover from this recent speed bump.

“It’s all in believing in the higher power,” Hogan said. “For those that don’t have a very strong religious background, it’s the people around you that just uplift you. This is a very good place to be.”

@mikal_bridges talking what it means for him to be in Phoenix after the @Dbacks held a Mikal Bridges Appreciation Day this summer and he spent some time in Tempe closing down Vine Tavern. @Sports360AZ https://t.co/TYwITuQiFC
View on Twitter
3
7