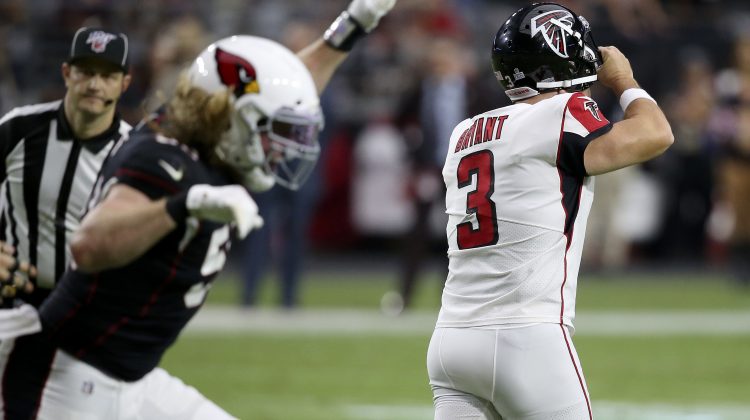 The Arizona Cardinals returned home Sunday afternoon and defeated the Atlanta Falcons 34-33 in dramatic fashion as Falcons’ veteran kicker Matt Bryant’s late PAT hooked wide left in front of an announced crowd of 60,140 at State Farm Stadium. With the win the Cardinals improve to 2-3-1. The Falcons are 1-5.

Here are five things we learned in Glendale.

1. Better Late Than Never…It wasn’t without a few obvious blemishes but the Cards’ won their first regular season home game in almost a year. Before a little late-game luck against Atlanta, the last victory inside State Farm Stadium was an 18-15 triumph over the San Francisco 49ers back on October 28th of 2018. Head coach Kliff Kingsbury knew the Matt Ryan storm would be coming at some point. “That’s NFL football…you knew they’d come back,” Kingsbury said. “You have to give them a lot of credit. They played a great game.”

2. Murphy’s Law…Rookie cornerback Byron Murphy seems to just get better and better every week. Against Atlanta the former Saguaro High and University of Washington star flashed the ball skills Steve Keim and the Cards’ brass fell in love with. “BJ” had a beautiful first half pass breakup on a ball intended for Julio Jones and later made a nice open field tackle on Devonta Freeman inside the red zone. One of Murphy’s greatest assets he’s flashed early in his pro career is not only being a willing tackler but a fundamentally sound one, as well. Sunday he registered six tackles (one for loss). The cornerback position appears to be in good hands considering Patrick Peterson returns this week and will play for the first time in 2019 next week in New York against the Giants.

3. Spreading the Wealth…Kyler Murray was simply brilliant in the first half completing 16-19 for 240 yards and a touchdown. The offense looked crisp and the number one overall pick kept Dan Quinn and Atlanta’s defense guessing all game. Murray completed passes to nine different receivers before halftime and even found tight end Maxx Williams on a beautifully called play from Kliff Kingsbury for a 20-yard touchdown early in the third quarter. Murray set an NFL rookie record completing at least 20 passes in each of his first six NFL games. “That’s who he is, it’s hard to rattle him,” Kingsbury said. “I think his teammates feel that.” He finished 27-37 for 340 yards and three touchdowns. He didn’t throw an interception and also rushed for 32 yards.

4. In The Zone…Efficiency in the NFL can be a beautiful thing and, for a week at least, the Cards’ offense looked masterful with Kingsbury isolating skill players in favorable matchups — allowing Arizona to finish drives with touchdowns, something which had been lacking during the first month of the regular season. Andy Lee didn’t punt until midway through the third quarter, although the offense didn’t appear nearly as sharp in the second half. “It feels great,” running back David Johnson said after his two-touchdown performance. “You can see what happens when we get the ball in the end zone.”

5. Reoccurring Problem…Opposing tight ends have had their way with defensive coordinator Vance Joseph’s group and Sunday was no different. Atlanta’s three-headed monster of Austin Hooper, Luke Stocker and Jaeden Graham combined for 10 catches for 138 yards and a touchdown with Hooper doing most of the damage. Afterwards, Kingsbury conceded the back half of the unit is still a work in progress after Ryan threw for 356 yards and four touchdowns. “Any time you give up yardage and give up points you’re concerned about that,” he lamented. “We’ve got a banged up secondary.”