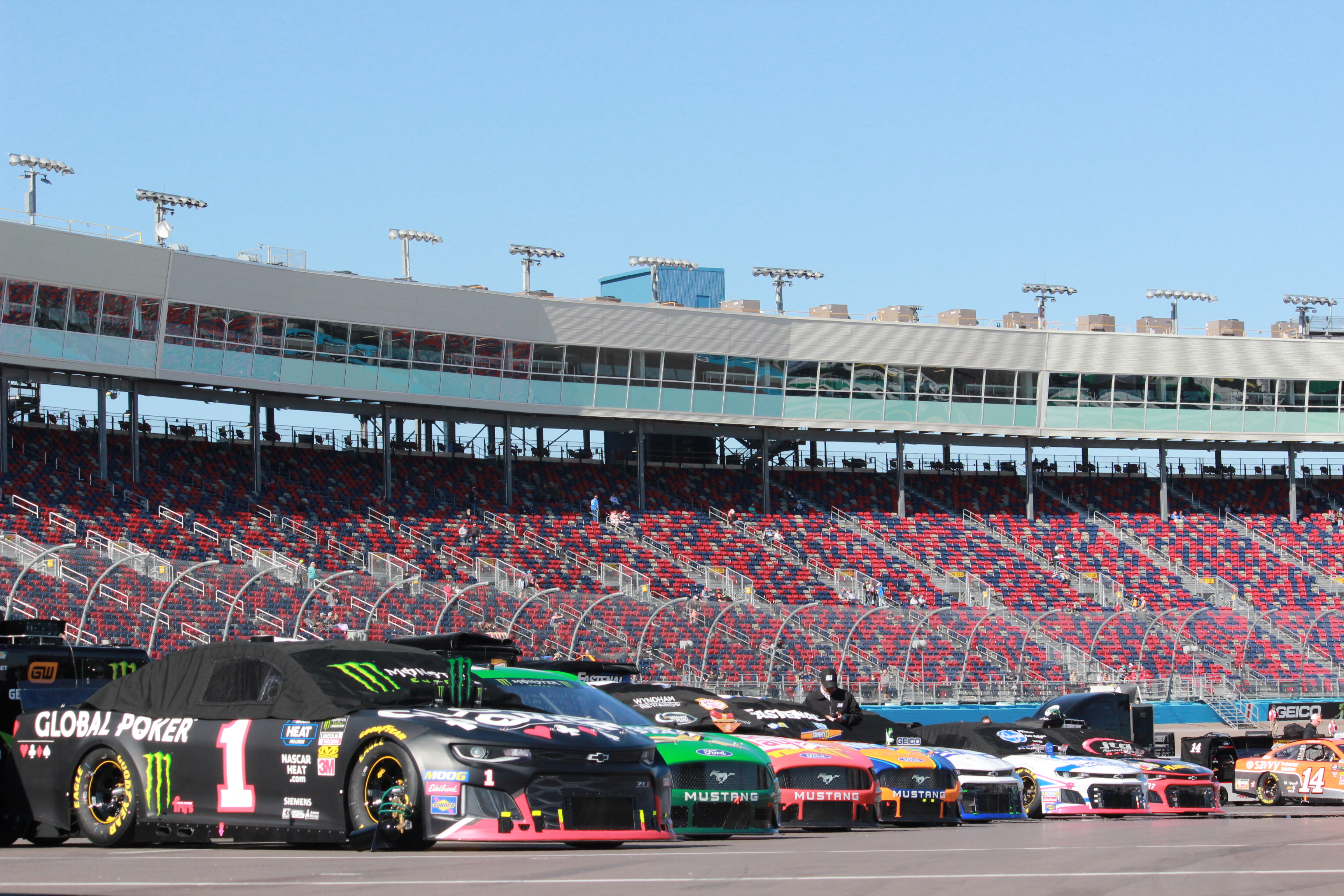 The NASCAR Playoffs are reaching a climax entering their semi-final round that will end in Arizona at ISM Raceway. I get it though, not all of you are NASCAR gear-heads, but you’re probably interested that your home track hosts the semifinals, and you might want a driver to root for.

After 26 regular-season races, the top 16 drivers with the most points and/or wins advance to the Playoffs. The points then reset and four drivers are eliminated every three races, kind of like those arcade games where you’re eliminated if you don’t reach a checkpoint in time.

The rules are simple; win, and you’re on to the next round, the rest are set by points accumulated. On Sunday, Kansas eliminated four more drivers. When the checkereds fly at ISM Raceway, four drivers will be eliminated and four will move on to Homestead-Miami Speedway with an equal shot at winning a championship. Like the final race in Disney Pixar’s 2006 film, Cars, whoever finishes the best of the four at Homestead wins the championship, but the other 36 drivers will still be on the track racing for a win too.

Below is a guide to pick who your favorite driver will be when NASCAR decides the Championship Four at ISM Raceway.

If you find yourself rooting for villains like Thanos, Snape, Hans Gruber, Agent Smith, and other big bads, you’ll love the guy that everyone loves to hate.

The 2015 Cup champion, Kyle Busch, owns the most ‘boos’ at every track and is never afraid to say what he thinks. He carries a chip on his shoulder, will tell people just how good he is, then backs up everything he says out on the track. He owns over 200 wins in NASCAR’s three premier series, the most of any driver. Even though many can’t stand to hear his name, he’s certainly one of the best of all-time.

.@KyleBusch has a message for those booing him… ?#NASCAR pic.twitter.com/3JNmHSG8fY

Many say the good guys never win championships. Martin Truex Jr. reminded everyone in 2017 that they’re all wrong.

With a small, underfunded team, Truex defied the odds and claimed the 2017 Cup title. He and his long-time partner, Sherry Pollex, are an inspiring duo who battled through Pollex’s long fight against Ovarian Cancer. They host many events throughout the year to raise money for research and show the utmost class and respect both on and off the race track. If you’re someone who loves the good guy to always win, follow Martin on his journey for his second career championship.

.@MartinTruex_Jr and longtime girlfriend @SherryPollex shared a very special moment during the pace laps at the Roval this Fall. pic.twitter.com/2vsVJMmpyF

After over four years of fighting, J.D. Gibbs, the son of former Washington Redskins coach and current NASCAR team owner, Joe Gibbs, passed away from a degenerative neurological disease at the age of 49.

J.D. played a huge role in the development of Joe Gibbs Racing, including adding Denny Hamlin to the team in 2006, driving J.D.’s favorite number, 11. Just over a month after J.D.’s passing, Hamlin took Gibb’s No. 11 to victory lane on NASCAR’s biggest stage, the Daytona 500. “His car. His number. His signature above my door.” It’s been a breakthrough year for Hamlin in his 13th NASCAR season and the feel-good story of the year. If this sounds like your kind of story, root for Denny to finally claim his first championship after multiple career runner ups.

“This one is for J.D.” pic.twitter.com/r5iYk4yfvi

Penske Racing | 2 points above the cutline

The defending champion got through the Round 12 by the hair on his chin (if he had any). The 29-year-old is one of the youngest of the championship competitors and one of the youngest to win it all in the past few decades. Even though he’s not even 30 yet, he hasn’t made many friends on the track.

He’s been punched in the face by Kyle Busch, told Kevin Harvick who wears the pants in the Harvick household, turned into an ultimate villain by moving Martin Truex Jr. for a Playoff win, cost himself a chance at a championship after Matt Kenseth gave him a dose of payback, and has gotten into it with Denny Hamlin multiple times including just a couple weeks ago. But at the end of the day, he won it all last year and he can certainly do it again in 2019. If you always support the team to go back-to-back and pull through all the adversity, make friends with the 2018 Cup champion, Joey Logano.

Stewart-Haas Racing | 2 points below the cutline

Want to pick the odds-on favorite to win at ISM Raceway? You got a good chance of picking the Phoenix winner if you choose 2014 Cup champion, Kevin Harvick. His nine ISM Raceway cup wins tops the record book and has led the most laps all-time. If you don’t choose to cheer for Kevin for his wins, choose to cheer for what has made Harvick rise in NASCAR popularity.

Keelan Harvick has taken NASCAR by storm. The seven-year-old son of Kevin has been in the car for a few of dad’s burnouts and has delivered some of the most adorable content in NASCAR history. If you want to join Keelan’s side, root for his dad, Kevin Harvick.

.@KevinHarvick does burnouts with Keelan in the car.

If that isn’t the most badass father-son moment ever, we don’t know what is. #KidsDriveNASCAR pic.twitter.com/Hk2Nt9nUTt

Hendrick Motorsports | 6 points below the cutline

Join the bandwagon while it’s still fresh! After 15 straight years of Dale Earnhardt Jr. winning NASCAR’s “Most Popular Driver Award,” a new champion was crowned last year, and he’s here to stay. 23-year-old Chase Elliott is the son of 1988 Cup champion (and 16-time most popular driver) “Awesome Bill from Dawsonville (, Georgia)” Elliott. In his fourth full Cup season, he has finally broken through, winning six races in the past two seasons.

Elliott is a good ‘ol southern NASCAR boy who touches NASCAR’s roots while bringing in a new era of young NASCAR fans at the same time. If you just can’t decide who’s the best driver to root for, go ahead and hop on the bandwagon, because he’ll win a title one day.

Back in the olden days of NASCAR, drivers came up through the dirt ranks. While that changed for the past couple of decades, Kyle Larson is one of the leaders in bringing NASCAR back to their roots. Larson is a fan favorite to watch. His dirt background has made him comfortable flirting with disaster racing on the high side right next to the wall at 200 mph.

Also, he’s just a really fun guy and a good racer (as shown below). He’s a future champion of the sport and a fun guy to watch rip around a track, pavement or dirt. His wife Katelyn may have become more popular than Kyle after his win at Dover a couple of weeks ago when she shotgunned a beer in victory lane. If you want to watch one of the most exciting guys in the sport (with arguably the coolest wife), keep an eye on Kyle Larson.

“I’ll probably get in trouble for that. But I’m Asian, so I can say it.” pic.twitter.com/7MDBx6C8MV

Penske Racing | 21 points below the cutline

After the retirement of Kasey Kahne (or as the ladies called him, “Blue Eyes”), many pondered who would take the title of the heartthrob of NASCAR. Son of sprint car star and former NASCAR driver, Dave Blaney, Ryan has already claimed three wins to his credit, including Talladega a few months ago. The ladies seem more so impressed by his new hobby of magic though, which also seems to be winning off the track as much as he’s winning on the track.

Thanks for taking the time @blaney! It meant so much ! Good luck the rest of the weekend @MonsterMile. We’ll be there cheering you on ? #NASCARPlayoffs #glasscaseofemotion #glasshole #blaney pic.twitter.com/y9sLJcDNBU

The ISM Raceway Bluegreen Vacation 500 will fly the green flag on Nov. 10 on NBC at 12:30 MST. Next year, the ARCA Menards Series will visit in March for the first time ever and ISM Raceway will hold NASCAR Championship Weekend in November 2020. 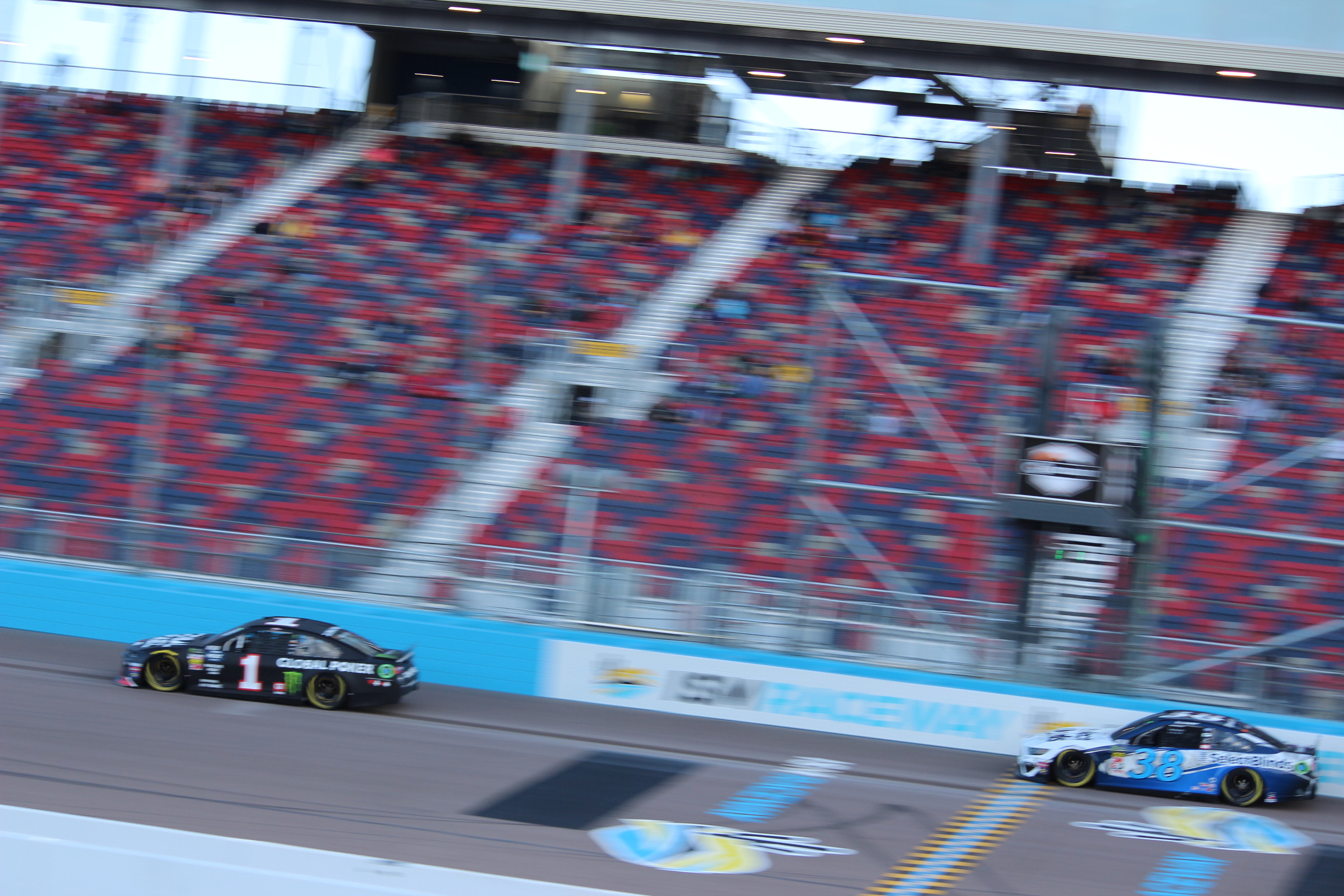 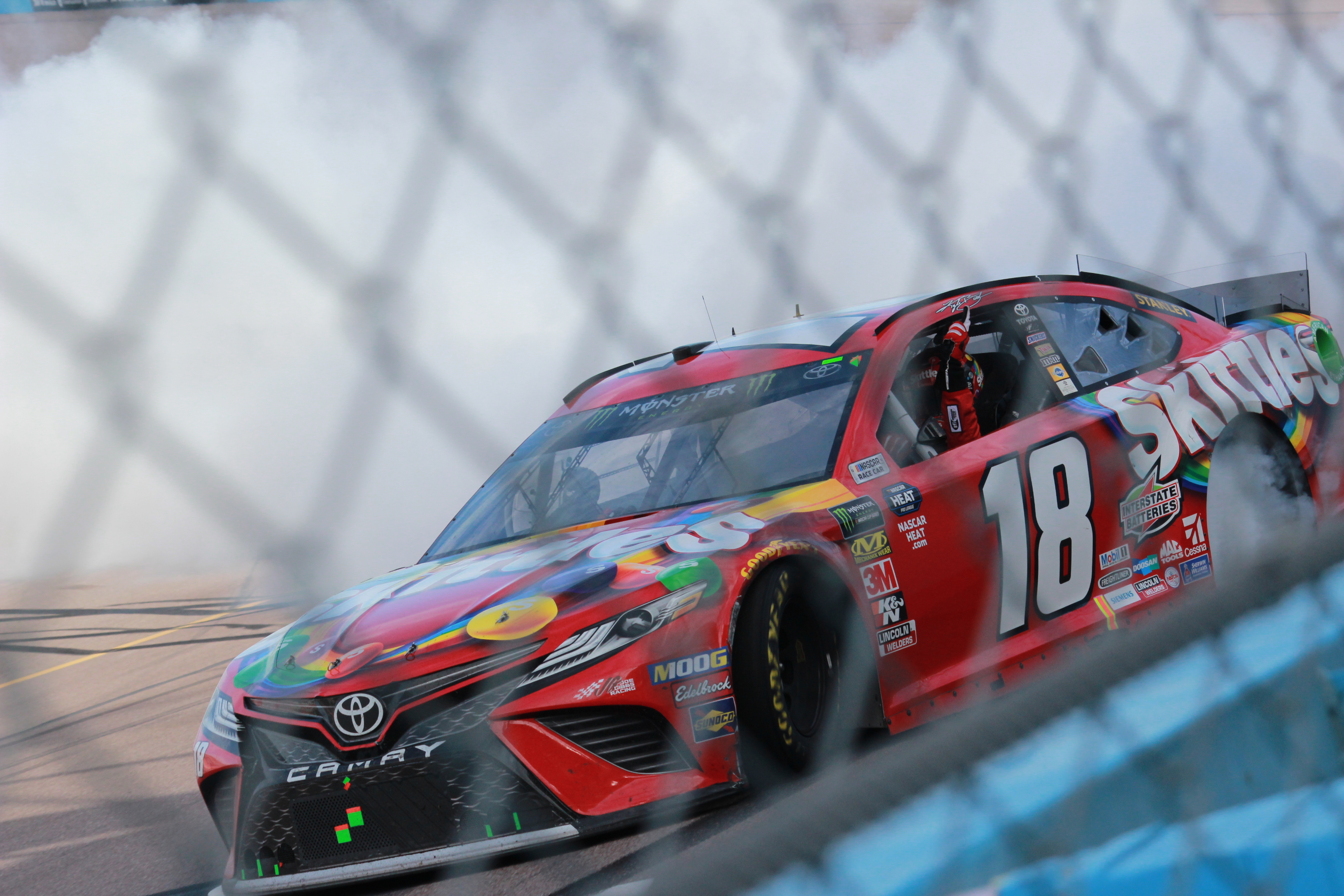 Kyle Busch (18) burns the house down at the TicketGuardian 500. 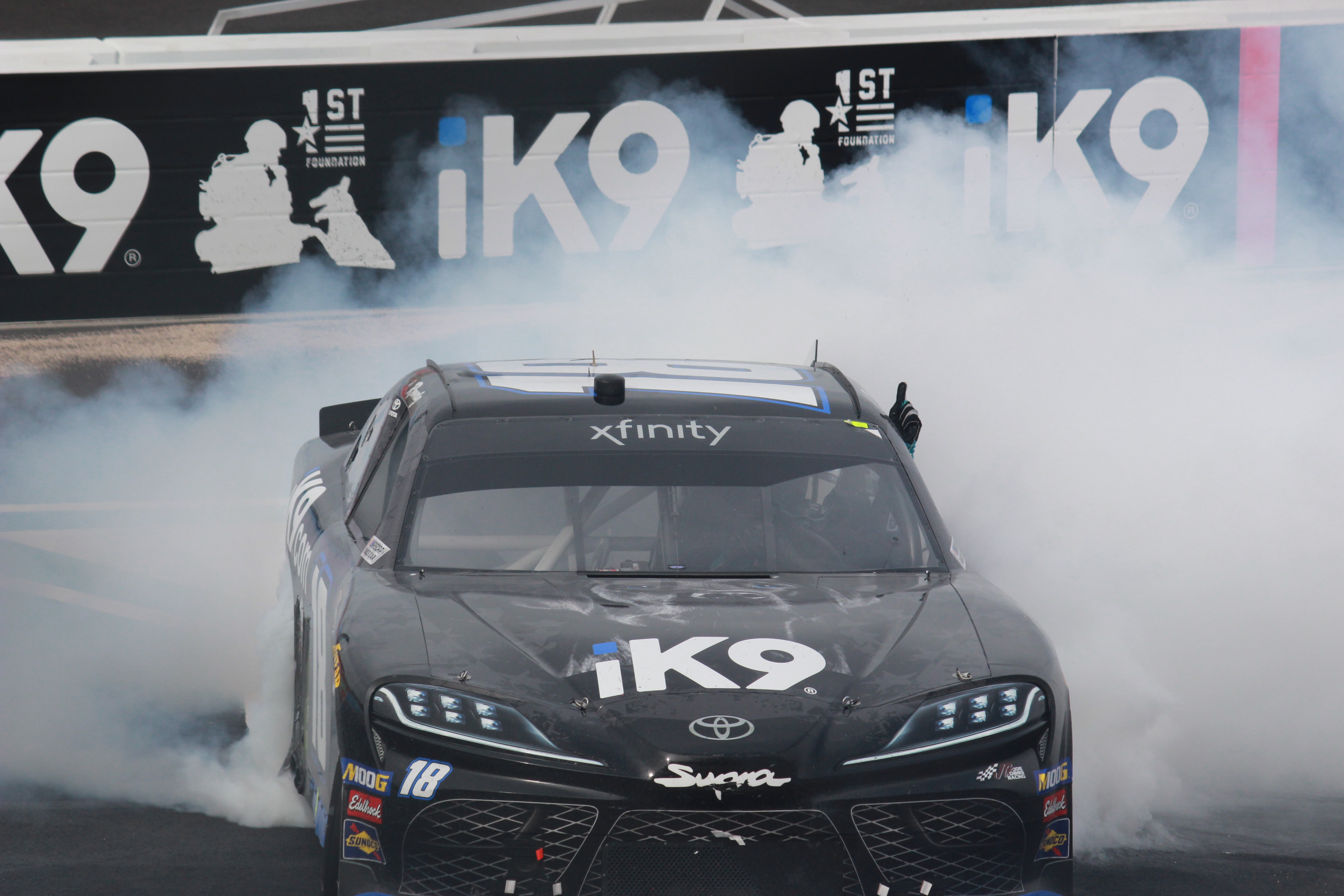 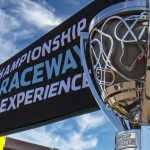