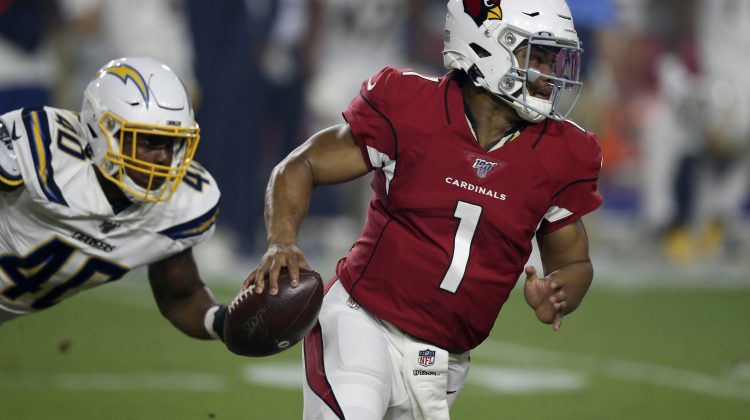 The Arizona Cardinals opened their 2019 exhibition season defeating the Los Angeles Chargers 17-13 before an announced crowd of 60,146 at State Farm Stadium in Glendale on Thursday.

1. Murray on the Mark…If you were late-arriving to the stadium, you probably missed him. Rookie quarterback Kyler Murray played one series against the Chargers and looked good. The top overall pick completed six of his seven pass attempts for 44 yards and moved the ball from inside the Arizona five yard-line to near midfield before a penalty and sack killed the drive. “I thought it was smooth,” Murray said of his first action. “I was anxious to get out there, move around and throw it a little bit. I really just tried to execute whatever coach called and I think we did that for the most part.”

2. A Name To Remember…For “fringe” players or ones “on the bubble,” the pre-season is all about showcasing your skill-set when the opportunity presents itself. Second-year wide receiver Trent Sherfield certainly stepped into the spotlight against the Chargers catching four passes for 44 yards, including a pretty 22-yard, toe-tapping touchdown just before halftime from backup quarterback Brett Hundley. “He had a great day,” Murray said of Sherfield. “He’s one of the hardest workers on the team.” He also showed why he stuck as an undrafted free agent last year under Steve Wilks, making a beautiful open-field, first to the football, tackle as a gunner on punt coverage.

3. Just For Kicks…With Phil Dawson now retired (he was a free agent, anyway), the kicking duties fall squarely on the right foot of former Arizona State record-breaker Zane Gonzalez who hit 7-9 field goals for the Cards in 2018. Gonzalez made an impressive 2019 practice football debut nailing a 55-yarder in the third quarter. “He drilled it,” head coach Kliff Kingsbury said. “Like I said all along, he’s had a fantastic training camp.” As of now, Gonzalez is the only kicker on the roster. Don’t expect that to change if he continues to perform the way he did against Los Angeles.

4. Getting Defensive…Yes, it’s the pre-season. Yes, Philip Rivers didn’t play a single snap and Melvin Gordon is holding out but Vance Joseph’s defense was, outside of a 31-yard scramble touchdown by rookie quarterback Easton Stick midway through the fourth quarter, efficient. The unit surrended 357 total yards but only allowed the two touchdowns. Arizona registered three sacks.

5. Penalty Problems…As almost to be expected, the common pre-season theme reared its ugly head once again. Arizona’s second-string offensive line, particularly tackles Rees Odhiambo and Korey Cunningham, struggled containing LA’s edge rushers from the opening series. Everyone gets a pass I suppose but with Murray’s health the primary concern, here’s hoping practice makes perfect and technique improves over the next three weeks.

The Cardinals are back at home next Thursday when they host Jon Gruden and the Oakland Raiders at 5:00.