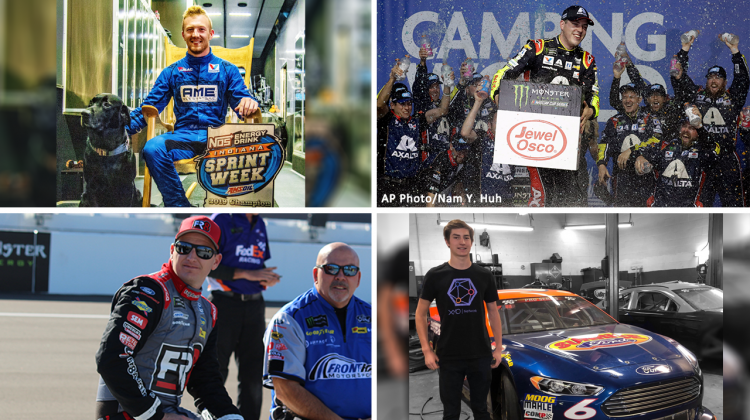 The Arizona heat made it’s way to Indiana and Chicago this summer as the Arizona racers have made some noise and some history in the past couple months. Here’s a look at some of State 48’s top national series drivers and their summer success.

I guess the answer to all those questions is actually, ‘who cares?’ At the end of the day, C.J. Leary has somehow gapped out to a 122-point lead over Brady Bacon as a first-year start-up in the Reinbold/Underwood Motorsports No. 19AZ.

Leary is certainly not a ‘nobody’ by any means, but the fact that this Greenfield, IN native, is winning with a team that seemingly came out of the blue to lead the USAC national points is mighty impressive.

The AMSOIL USAC National Sprint Car Series takes a three-week break now before dashing into the final 16 races of the year, ending with two races at Arizona Speedway for the Western World Championships. Leary’s lone win came back in February at Bubba Raceway Park and averaged a finish of fourth over ISW’s eight races.

This Arizona-owned team is no small team, but the Andy Reinbold and Todd Underwood owned machine are making a loud entrance into USAC’s national series with Davey Jones on the wrenches, and Leary ripping this car around behind the wheel.

For the first time in the history of NASCAR’s premier series, an Arizonan sat in victory lane. Tucson’s Alex Bowman finally got the monkey off his back on July 1 at Chicagoland Speedway, claiming his first career NASCAR Cup Series win.

Bowman led 88 laps in the Hendrick Motorsports No. 88 en route to his rain-delayed victory and punched his ticket to the NASCAR Playoffs with some extra playoff points. Unfortunately, a wave of momentum didn’t follow.

Since the victory, Bowman hasn’t finished better than fourteenth in the past four races and qualified outside the top 20 twice. The question no longer remains if the Tucson native can make Arizona racing history with a win, but if he can jump back on track to still be in the title hunt when the semi-final race is at his home track of ISM Raceway.

NASCAR heads to Watkins Glen next this weekend, the second of three road courses on the schedule, where Bowman finished 14th in 2018. The No. 88 sits at ninth in the NASCAR Playoff standings with his victory.

Grandson of Indianapolis 500 champion, Parnelli Jones, and son of multi-talented wheelman, P.J. Jones, Notre Dame Prep senior, Jagger Jones, is starting to build a name for himself too. The teenager entered his rookie season of the K&N Pro Series West this year with Sunrise Ford Racing.

Jones has yet to hit victory lane but is still in championship contention. Although the Scottsdale driver is coming off his second finish outside the top ten, he has averaged a finish inside the top six this year. Last week’s Casey’s General Store 150 at Iowa Speedway was a race with the K&N West and East Series combine where Jones maintained himself in the front pack but was involved in a late-race incident.

Jones is currently fourth in the west series points, only 24 points behind leader, Derek Kraus. He has also completed every lap in 2019’s eight starts and still holds momentum after working to get an eleventh-place finish at Iowa.

You can listen to an interview with the Scottsdale driver on the Inside Lane and check out the Drive to the Title notebook, highlighting the series as we draw nearer to the championship race at ISM Raceway in Phoenix. The West Series is back in action on August 17 at Evergreen Speedway.

Grandson of Parnelli Jones, racing is in his blood. We can’t wait to have Jagger here November 9 for the K&N Pro Series West Championship! https://t.co/aS4JfN3FKo

Any Luck Other Than Bad Luck

Glendale’s Michael McDowell had some good outings in the past few months in the Front Row Motorsports No. 34. The only problem is luck hasn’t been on McDowell’s side.

For an example; on Sunday, McDowell was battling towards the top 20 with a few laps to go at Pocono and was collected in a mess between Kurt Busch and Ricky Stenhouse Jr.

McDowell has qualified in the top 20 with his Front Row Motorsports team in three of the last six races but hasn’t had the results to show.

Glendale’s driver heads into Watkins Glen with confidence as a road course ringer at a track he has a good history with. McDowell has qualified inside the top 15 five times in the past seven races at The Glen, finishing no worse than 18th the past three years.

McDowell sits 27th in the NASCAR points with one top five on the season.

With a P17 run, @Mc_Driver has a new personal best finish at @NHMS! Way to go wheelman. ?

Yup, you read that correctly. “Zombie” Chris Blose is back and headed to Australia to compete in the Australian Supercross Championship aboard the factory Honda Penrite Oil team. Blose will serve as a teammate to reigning 3-time Australian Champion, Justin Brayton, and Brett Metcalfe, both riding the MX1 division (450cc), while Blose will ride the MX2 division (250 cc).

Chris Blose is already no stranger to success in Australia as he was the 2017 Aus-X Open winner in the MX2 division. However, Blose will have fierce competition as he challenges for this 5-round championship from Aussie natives such as Hayden Mellross, Wilson Todd, and last year’s champ, Jay Wilson. Blose will also have to face the handful of Americans that will also follow his route to the Australian championship including long-time Arenacross and Supercross rival, Jacob Hayes.

The championship starts up on October 12th kicking off in Queensland.

Getting some Zombie butt patches made for Vegas since people have been requesting it! pic.twitter.com/Z6My7TRzRJ