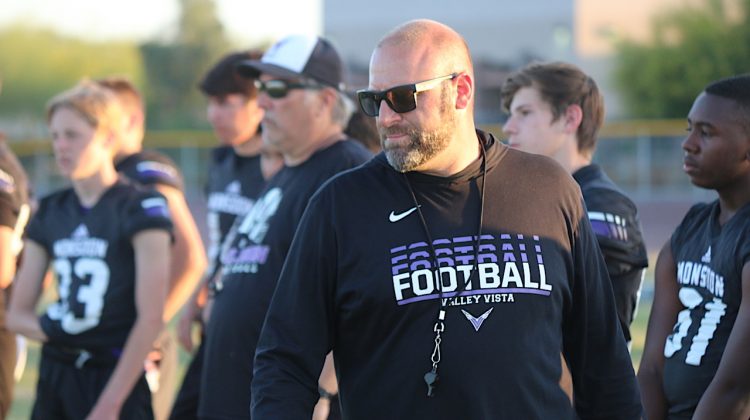 We’re officially one month away from the start of Arizona high school football season on August 23. With kickoff quickly approaching, let’s jump in and look at some more westside headlines as the school year draws closer across the state.

Valley Vista is coming off a .500 season after starting the year 3-1. Returners for VVHS will play a large part in the Monsoon’s 2019 success on offense, and newcomers on defense.

“We return a good group of experience on offense, including 4 offensive linemen, led by left tackle, Andrew Rumary,” head coach, Joshua Sekoch told Best in the West. “In our skill group on offense, RB Henry Brown returns after leading team in rushing last year and he is a fantastic student with a GPA over 4.0.”

The defensive varsity roster will see a variety of newcomers who Sekoch is interested to watch grow with the team. Vincent Thompson and Jeremiah Flowers find themselves competing on the varsity roster after rising through the ranks together alongside Carson Allcock and Jalelin McCullen.

The Monsoon finished 2018 ranked at the 22 spot in the 6A Conference. With some improvement, Valley Vista could be in tournament contention, especially if several 6A teams get bumped up to the Open Eight Playoff.

The Monsoon roll into their 2019 season at home against Westwood on August 30.

For the first time in 13 years, the Apollo Hawks have a new head coach on the sidelines. In January, the Hawks promoted Offensive Line coach, Aaron Walls to lead Apollo following Zack Threadgill stepping down.

“I am almost done completing what I believe is a great staff of coaches with a lot of experience and the willingness to improve young student-athletes in all phases of life,” Walls told Best in the West. “We bring back a good group of young men who had action on the Varsity level last year. We also are very excited about the Freshman class that is coming up to join us next year.”

Apollo ended 2018 with a 3-7 record, ranked 24 in the 5A Conference. Learning and rebuilding the Hawks just like last year, the Hawks will face four of the best teams in 5A, Centennial, Notre Dame Prep, Casteel, and Sunrise Mountain.

Apollo starts their season at home against Desert Mountain on August 23.

Last day of camp. While bittersweet we’re getting ready to bring it this up and coming season? https://t.co/RXy79iRWqC

Buckeye Union will be the only west side team playing on the road in the 4A Conference on August 23. The Hawks will once again open the season against Amphitheater, their biggest win of 2018.

Their season will be highlighted by an out of state trip to battle against Kailua in Hawaii, a rematch from 2017 where BUHS fell in the closing minutes by just one point in the Aloha State. Also, the Hawks will once again battle with their two sister schools to close out the season.

Talent from Many Places

Copper Canyon is building a roster of diverse roots. Multisport athletes can be extremely beneficial to football teams, and CCHS will be watching that and more.

The Aztecs will not only hold basketball and baseball athletes on their squad in 2019, but they also include Alfredo Dgyves from their soccer program that went 10-1-1 last year and took home a region title.

Another fun story to watch will be New Jersey transfer, Kai Bateman. Bateman will be adding competition to the safety position adding to the defensive roster. Even though CCHS was ranked 28 in the 6A Conference, the Aztecs are on the rise. With a roster continuing to build, last season was the Aztecs’ highest end of the year ranking in nearly a dozen years.

Copper Canyon opens the season on a two-game road trip with two other westside schools starting with Liberty on August 30.

Great time at South Mountain working with the Jaguars, @CaliBloodLine81 Coach Carter, staff & players. Great to get work in with young men of character, class act. Appreciate North, McClintock, & Tempe HSs as well. Best of luck to you all! @Coach_FreemanCC @brett_spear #EARNIT pic.twitter.com/9tSj6uwqTU

The season is coming up fast and so is the beginning of the school year for many schools. Read up on more across the state with Eric Sorenson’s Zone Read and get ready for #FridayNight360AZ come August.