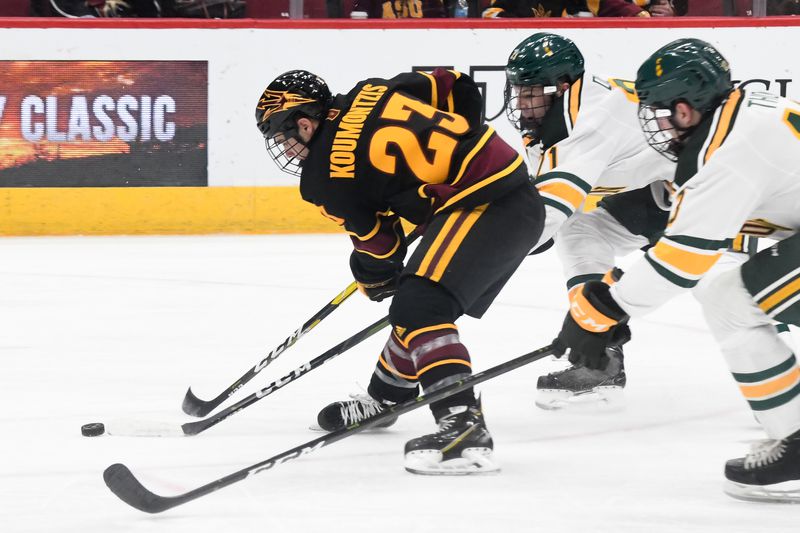 After making history by making their first-ever NCAA Tournament, the Arizona State hockey team and one of its players is making more noise during the offseason.

On Tuesday morning, it was announced that Sun Devil forward Demetrios Koumontzis was one of 44 players selected by USA Hockey to compete at the 2019 World Junior Summer Showcase that runs through July 26-Aug. 3 in Plymouth, Michigan.

Koumontzis has an opportunity at the event to make the final roster for the U.S. National Junior Team and play in the 2020 International Ice Hockey Federation (IIHF) World Junior Championship that will run from Dec. 26, 2019 to Jan. 5, 2020 in the Czech Republic.

“We’re very proud of Demetrios,” said ASU head coach Greg Powers in a release from Sun Devil Athletics. “He’s earned this opportunity and I have no doubt he’ll go and represent himself and our program incredibly well at this camp while working toward his ultimate goal of representing our country at the World Junior Championships.”

Koumontzis was born in Pittsburgh but grew up in Scottsdale. He played locally for the Phoenix Jr. Coyotes U-16 team from 2015-17 before playing high school hockey for one year at Edina High in Minnesota.

The19-year-old, who is a fourth-round draft pick of the Calgary Flames, had 20 points in 35 games for ASU in 2018-19, as he returned back to the Grand Canyon State for his first year of NCAA hockey.

He reflected on his youth years in Arizona during an open practice at the Scottsdale Ice Den earlier this year.

“I grew up playing here and these little kids, it was me 10 years ago,” said Koumontzis at the Ice Den in March. “It’s awesome and it’s good to be back. It’s fun to showcase what we are right now…Hopefully they continue to grow and want to be at a place like this (at ASU).”

Koumontzis might be the first prospect from ASU to showcase himself at this year’s World Junior Summer Showcase, but he certainly isn’t the first player from Scottsdale. Current Toronto Maple Leaf and three-time All-Star Auston Matthews, who was the No. 1 overall pick in the 2016 NHL Draft, played in the 2016 World Junior Championship in Finland.

Matthews, who is also an Arizona native from Scottsdale, was an alternate captain on the 2016 team and led Team USA in points with 11 in the tournament.

Although Matthews didn’t take the same path as Koumontzis by playing NCAA hockey, the pipeline through Arizona remains the same, and Koumontzis will look to represent ASU on an international stage.