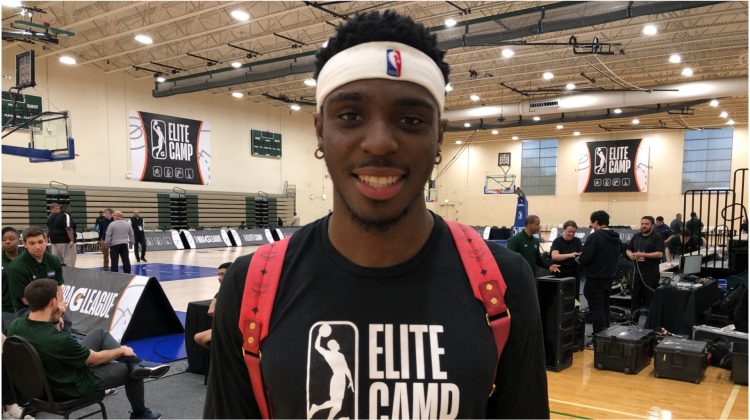 CHICAGO — All Zylan Cheatham was looking for was an opportunity. The G League Elite Camp here in Chicago presented the perfect one and the former Arizona State standout took full advantage.

Although Cheatham wasn’t one of the 10 players selected to stay for this week’s NBA Combine he was happy with the effort he put forward in front of his college peers the past two days at the Quest Multisport Complex.

“Overall, it was an unbelievable experience,” Cheatham said to Sports360AZ.com. “To be around these guys, you watch them all year playing college basketball at the highest level-some of the best players in the country. To be considered in that company is quite an honor to me. I learned that I could compete with anybody. When I’m competing out there I can play with the best of them.”

In Tuesday’s final showcase exhibition the versatile forward scored 11 points and grabbed eight rebounds. Although he committed a game-high five turnovers, Cheatham stuffed the stat sheet registering three steals, while also dishing out a pair of assists. He shot 4-7 from the field and made three of his four free throw attempts.

Strong two days from Arizona State’s Zylan Cheatham at the G League Combine. Showing off his tremendous physical tools with putback dunks and transition finishes, but also making a ton of plays defensively and on the glass. Plays super hard, has a feel and can guard everyone.

Cheatham said he had a few butterflies playing behind a mostly packed gym filled with NBA scouts, coaches and personnel.

“Good nerves, good nerves,” he said with a smile. “I was more excited about everything…the whole experience. If someone said they had no nerves, they’re probably lying about it…but once the ball goes up, you’re in a zone.”

Cheatham feels he has a shot to fulfill his NBA dream considering the feedback he’s received from the league.

“A lot of people like my defense and versatility,” he explained. “They like my passion for the game, how hard I play. Those things are staples in the game that you can get paid to do.”

Zylan Cheatham (@1KingZ4) has fouled out. 22 points (on 8/12 shooting) and 8 rebounds. Hugs entire team. Hurley points at him and claps. Cheatham had a tremendous impact on the program in his two years though he was only able to play one season. Absolutely fantastic person.

With a professional career ahead of him, Cheatham took a moment to reflect back at his short, yet incredible time at his hometown school.

“It was like a fairy tale ending to my college career,” he said with a wide grin. “It was a unbelelieveable year, unbelievable environment to play in front of my home fans, my family, to play for Bobby [Hurley]. To do things that haven’t been done in 20-30 years…it almost still doesn’t seem real talking about it.”